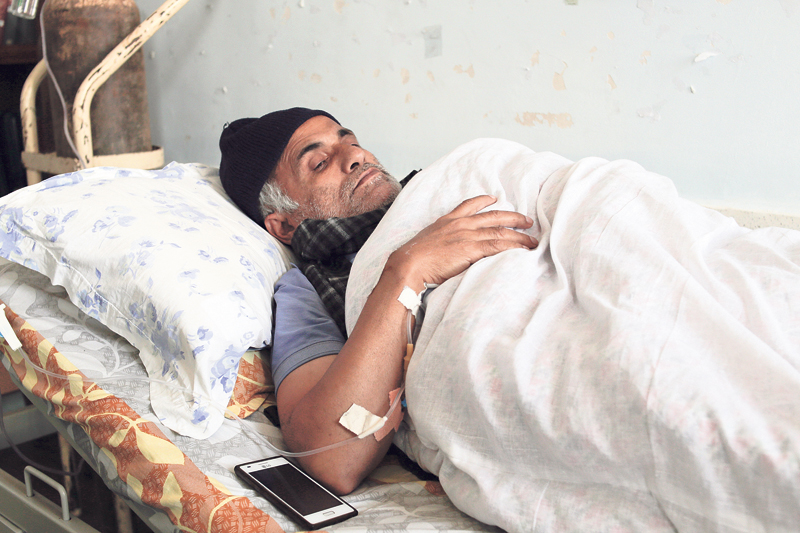 KATHMANDU, Nov 25: Resident doctors at the Tribhuvan University Teaching Hospital (TUTH) have decided to boycott the out-patient department (OPD) services from Friday in a show of support for the ongoing hunger strike by Dr Govinda KC, a senior professor at the Institute of Medicine (IoM).

About 2,000 patients from across the country visit the TUTH every day. There are around 300 resident doctors at TUTH, according to the National Resident Doctors Association (NRDA).

“We will boycott the OPD services at TUTH except for emergency, in-patient services and surgeries from tomorrow,” said Dr Leison Maharjan, president of NRDA. “We will continue our support until Dr KC's demands are addressed,” he added.

The resident doctors, who have continued to work by wearing black armbands, have been skipping the academic activities at IOM since Sunday.

The condition of Dr KC was deteriorating fast on Thursday, the 12th day of his hunger strike.

“His oxygen level is fluctuating and sometimes drops to 50 percent despite the oxygen being administered continuously,” said Dr Maharjan. “He has chest pains and respiratory problems. The pulse is only around 45,” he added. “Blood pressure is also on the lower side and his muscles cramping. He is too weak and speaks with difficulty.”

Dr KC started his latest round of hunger strike after the government failed to address his demands that it had earlier agreed to fulfill. In the course of starting his 10th hunger strike, he had issued a ten-point demand. The demands include sacking TU Vice-chancellor Dr Tirtha Raj Khaniya, appointing the Institute of Medicine (IOM) dean on the basis of seniority, implementation of previous agreements, not giving affiliation to any new medical colleges before the passage of the medical education bill by parliament, forwarding the process of impeaching Lokman Singh Karki, chief of the Commission for the Investigation of Abuse of Authority (CIAA), starting investigation against CIAA Commissioner Raj Narayan Pathak, and implementation of the fee structure proposed by the Mathema Commission.

However, the government has not done anything so far to address his demands. Health Minister Gagan Thapa flew to China after he visited Dr KC late in the evening on Tuesday to enquire about his condition. Neither Prime Minister Pushpa Kamal Dahal nor Education Minister Dhaniram Paudel, the key players among the stakeholders, are indifferent toward KC's demands.

Role of Jyapu community in development of agricultural economy is important: PM Deuba
6 minutes ago

Nepal should be known to the world through Newari culture: Prakashman Singh
36 minutes ago
NC Work performance Committee meeting on Saturday
1 hour ago