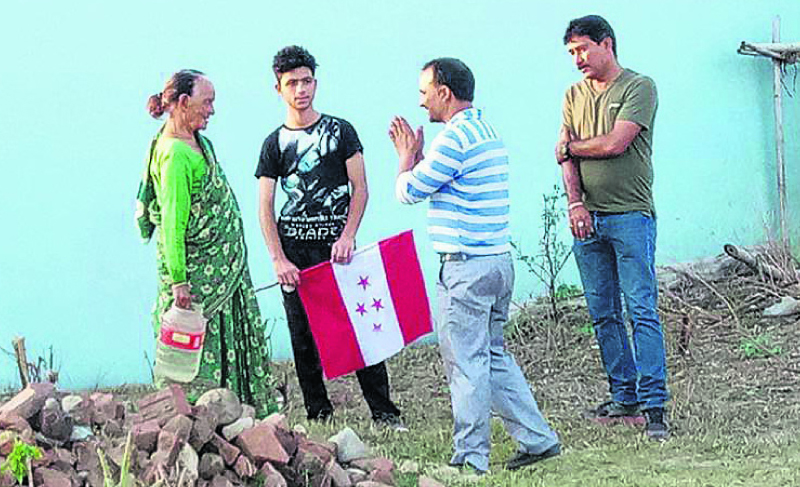 DANG, May 31: Jiwan Gautam was in high spirit after filling nomination for the post of mayor of the Ghorahi Sub-metropolitan City. A central district member of the Maoist-Center, his preparation for the May 14 polls was going on in full swing. But the government’s decision to hold elections in two phases, forced him to put brakes on the campaign.

Dang is among the districts where the government had decided to hold elections in the second phase, a month after holding the first phase of elections. The delay increased his election campaign spending. Along with that the deferral made the elections uncertain among some voters.

To his dismay, the government deferred the elections further. Instead of June 14, it was rescheduled for June 23 citing the need to address ‘Madhes issues’. This deferral challenged Gautam’s election spirit, he says.

Though he somehow managed to convince himself that the elections will be certainly held, it became hard for him to convince voters. But that was not all. Another deferral was on the way.

Since June 23 happened to fall during Ramadan, a holy period for the Muslim community, the government deferred the elections further to June 28. As of now, this seems to be the final date for holding the second phase of election. However, Gautam is not very happy. He says, he is exhausted and that the same is reflected when he meets voters.

“It would be one thing if they had changed it once. But it happened so many times. Our plan, preparation, energy money, everything has been affected and drained over and over again,” said Gautam. “Let alone the voters, sometimes, I myself feel less assured of election now,” he added.

According to Gautam, people were not that hopeful of election taking place in the first hand. So, during the campaign only few were taking interest in what his campaign was announcing. But towards May 14, when the election date was nearing, the fever gradually gripped them. Less than a week ahead of the election, the second phase was declared and the campaign’s grip slackened. “But after so many deferrals, renewing the spirit of the campaign and of the voter is not easy. Now, things are not that easy for us to handle,” he said.

When the second phase of election date was pushed he had convinced voters on behalf of the government that it was important to take the Madhesis in confidence. “I told everyone that the government took right decision by deferring poll date for including them. But that deferral planted seeds of doubt in the voters,” he said. “Now after so many deferrals, we are really hopeless and out of assurances to distribute to voters,” he added.

One after another deferral of election date has left Gautam and his likes in dilemma. Since the latest second phase election date falls during paddy planting season, they are further agonized.

“Election fever had already gripped the voters and candidates alike. Everyone was excited. Things were going on the right track. However, with every new deferral, things slowed down,” noted Narulal Chaudhari, Gautam’s rival for the post from CPN-UML. “And now the new date is at the end of June and that is the time during which voters will be busy planting paddy. We have least hope of seeing voters putting aside paddy plantation and coming to the voting booth to cast their votes,” he added.

Chaudhari too reiterated that the cost of election campaign has gone up by manifold. Due to the lengthy preparation time, it has affected the candidate’s campaign, he said.
Ramesh Pandey, a candidate for the post of ward chairperson of Ghorahi - 15 warned that holding elections could be almost impossible if the date is deferred once again. “It has happened several times. The atmosphere now is not like before. People are losing hope. If the government defers the polls again under any pretext, it’s going to be impossible to convince voters for participating in the election,” he said.

“We understand the complexities which have forced the government to do so. However, mass psychology is very important thing and making environment conducive for elections is a major challenge. We can’t afford to reschedule the polls date again,” he added.
According to Panday, both the election candidates and voters are feeling less interested after the deferrals. If the elections were held in the first phase the excitement would have been different, he asserted.

SINDHULI, Dec 6: The silent period for the parliamentary and provincial polls has begun from Monday midnight, barring political parties and... Read More...

Candidates visiting voters in their farms

RAJBIRAJ, Nov 21: With the parliamentary and provincial elections closing in, election fervor in Saptari, like other districts, is gaining momentum.... Read More...