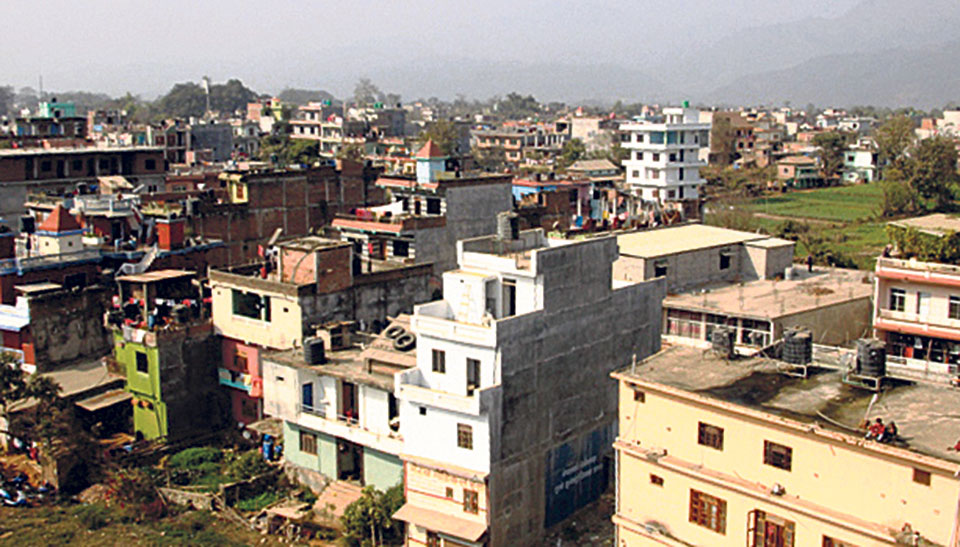 Rampur of Palpa district in this recent picture.

PALPA, Jan 22: Rampur, the largest valley of Palpa, is fast developing into a business hub of the district. However, the major market areas of the town such as Bejhad, Kisanbari, and Bijayapur are without land ownership certificate.

The locals of Rampur are buying and selling land based on small pieces of documents provided by the then village Panchayat. Despite lacking the ownership certificates, new buildings constructed by spending millions are popping up every single day. Interestingly, the land and house owners do not have ownership certificate. This has been a loss for the government as well since it cannot collect revenue.

A total of 856 households in Rampur-5, 6, 7 and 8 lack ownership certificates of their property. All this is because the then village Panchayat had sold land for the operation of Ram Tulasi Secondary School of Rampur-5 and Daraithanti Higher Secondary School of ward-6 without issuing land ownership certificates about four decades ago. Later, the same plots of land were sold by the owners to other people on the basis of receipts.

During the election, political party leaders had assured the people Rampur of solving this problem but they seem to have forgotten their promise after getting elected. After gaining a status of municipality, the prices of land and houses have skyrocketed in Rampur. In order to buy land and property, all one has to do is to pay money and get a receipt. There are no legal procedures for the people here.

Raman Bahadur Thapa, mayor of Rampur Municipality, informed Republica that the Land Revenue Office has been told to keep a copy of the receipts.

“The Land Revenue Office has sent all the details of the land and house owners of Rampur to the concerned ministry,” said Mayor Thapa.

Rampur gained the status of a municipality in 2015. The locals here have knocked the doors the land reforms ministry seeking help for solving this issue but in vain.

According to the District Land Revenue Office, the school had first sold its land in 1973. Later, people started living in the land by claiming their stake despite not having any legal documents.

Until 1999, 852 receipts were distributed for the land, while around 150 households do not have such receipts, according to the municipality.

“Some of the locals are paying tax from the receipt handed over by the school and the then village Panchayat,” said Basudev Dhakal who also has such receipt as the only proof of his land, adding, “Earlier, it was not a big deal but now it has become a matter of concern for all of us.”

Bhojendra Prakash Dhakal, chairperson of Rampur Chamber of Commerce and Industry, says, despite living in unmanaged the settlement, locals of Rampur are ready to pay the revenue to the government. He stressed that the problem must be solved from the higher authority.

“I built a house and started living here 25 years ago but I still don’t have land ownership certificate,” said Narayan Prasad Pathak of Rampur Municipality-6, adding, “We are not squatters who forcefully encroached the land. The school told us to buy the land while assuring to provide the ownership later.”

PALPA, Feb 3: A famous tourist destination aside, Rampur in Palpa district is proving to be an agricultural zone. Rampur... Read More...