Rakitic scores to give Barcelona 1-0 win at Bilbao 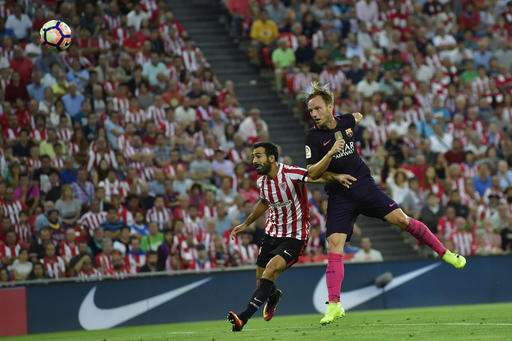 BARCELONA, Aug 29: Ivan Rakitic scored in the first half to help Barcelona win 1-0 at Athletic Bilbao on Sunday for a second straight victory at the start of the Spanish league season.

The Croatia midfielder headed in a well-placed cross by Arda Turan to cap a quick attack that broke down Bilbao's high defensive line in the 21st minute.

Lionel Messi and Luis Suarez were both off-target with a handful of opportunities to seal the victory at San Mames Stadium, but Barcelona's dominant possession game never let Bilbao mount a serious challenge.

"The matches here are always like this, intense and attractive. We played a good match," Rakitic said. "This shows that we are already in form even at this stage of the season."

The defending Liga champions joined Real Madrid and the surprising Las Palmas, which routed Granada 5-1 also on Sunday, as the only teams to have taken all six points.

Barcelona's win was its 100th in 126 league matches under coach Luis Enrique, who is starting his third season after winning the last two leagues, along with several other titles including a Champions League crown.

"It's tough to play here and we go home happy," Luis Enrique said. "These three points have a lot of merit. The pace was frenetic, and Athletic makes it complicated. We were facing a great rival and we could have put the result beyond doubt early on."

As usual, the match at San Mames was an entertaining, up-tempo contest of two contrasting styles.

The visitors fared just fine without the injured Andres Iniesta and Neymar, who won't start his season with Barcelona until after Brazil's upcoming World Cup qualifiers.

Once Rakitic, Messi and the rest of Luis Enrique's side got their collective passing game going, they had little trouble transforming Bilbao's pressure into a fruitless pursuit of the ball.

"They knew we were going to pressure them. At the start, we had a couple of good chances, but as the game went on we wore down," said Bilbao manager Ernesto Valverde. "We had trouble playing from behind."

Barcelona's biggest scare came from a poor pass by goalkeeper Marc-Andre ter Stegen, who took over as first-choice in the league after Claudio Bravo moved to Manchester City.

Ter Stegen made up for his pass directly to Benat Etxebarria by blocking his resulting shot with his face. Other than that mistake, the German was poised and precise with his passes from the back. The league said Ter Stegen's 46 completed passes were the most by a goalkeeper since the 2005-06 season.

Besides Rakitic's excellent overall performance, coach Luis Enrique can also be pleased with new centerback Samuel Umtiti, as well as the continued form of Turan and Sergi Roberto.

Turan had another convincing match in place of Neymar, delivering the pin-point pass for what proved to be Rakitic's winner.

Roberto, besides being solid in defense at right back, led a rapid counterattack that was spoiled when Suarez volleyed Rakitic's cross wide in the 57th.

Suarez had a golden chance to grab a goal in the dying seconds of the match when Messi laid the ball off for him with goalkeeper Gorka Iraizoz off his line, but the striker's shot was cleared by Eneko Boveda.