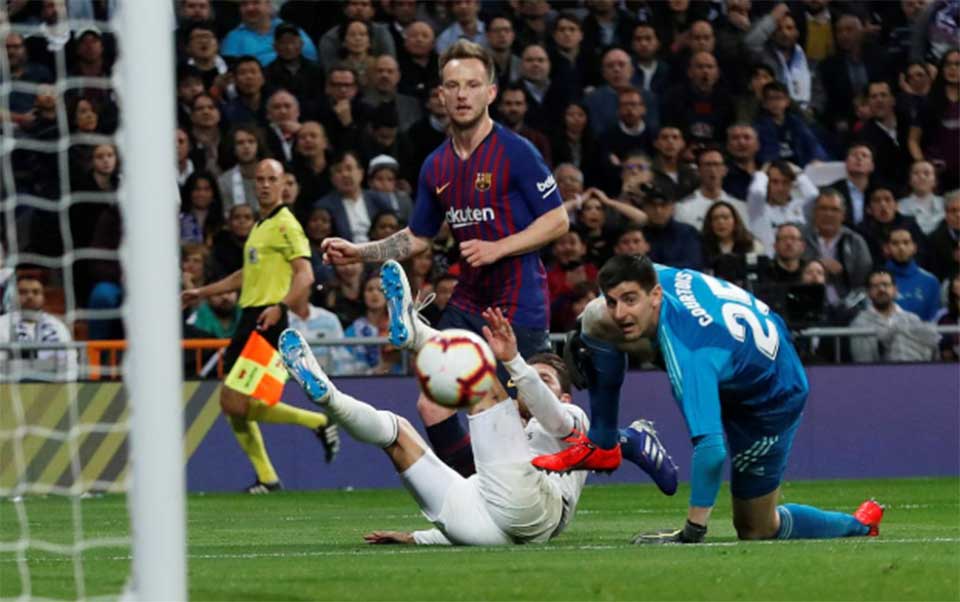 MADRID, March 3: La Liga leaders Barcelona won a tight and tense ‘Clasico’ 1-0 at Real Madrid on Saturday, beating their great rivals at their Bernabeu home for the second time in four days and moving a staggering 12 points clear of them in the standings.

Croatia international Ivan Rakitic struck the only goal of the game midway through the first half, delivering an ice-cool finish over Madrid keeper Thibaut Courtois after being played in by a clever pass by Sergi Roberto.

Lionel Messi and Luis Suarez were largely kept quiet in a shy display from the champions in which their defenders Gerard Pique and Clement Lenglet were the heroes instead, bravely putting their bodies in the way to snuff out Madrid.

The victory, which followed Barca’s 3-0 win over Real in a Copa del Rey semi-final on Wednesday, gave them a 10-point lead at the top over Atletico Madrid, who visit Real Sociedad on Sunday, and effectively ended third-placed Real’s title hopes.

“We are all going to enjoy this night as not many teams can say they have won twice in four days at the Bernabeu,” match winner Rakitic told reporters.

“We worked very hard for this victory and we deserve it. You have to fight, you have to stick your leg in and we are very happy.

“Every game is different, we did our homework well after the last game. We created a bit of danger in this first half, then played on the counter in the second, but winning here is always perfect.”

The win also took Barca ahead of Real in the history books, with 96 wins in the ‘Clasico’ to their rivals’ 95, while they recorded four consecutive league wins away to Real for the first time.

Real were left to reflect on a third consecutive home defeat in all competitions for the first time since 2004 and now have only one realistic objective for this season — retaining the Champions League which they have monopolised since 2016.

Winning Europe’s biggest prize again could also be the last chance coach Santiago Solari has of keeping his job as even though his side played well here and in the Cup defeat, losing to Barca twice and falling 12 points behind them is not something Real Madrid tend to tolerate.

“Both games were very intense and we gave a huge effort in both. We had chances, but when you cannot find a goal things slip away from you,” said Real captain Sergio Ramos.

“It’s obviously a huge step for Barca, and unfortunately the title is getting out of our reach, but we’ll keep fighting until the end.”

Madrid were less buccaneering than in Wednesday’s 3-0 defeat in the cup semi-final second leg and Brazilian teenager Vinicius Jr was their most dangerous threat once again but was again let down by his wayward shooting.

Vinicius tore down Barca’s left side early on as Real took the game to Barca but when the ball fell to Luka Modric, Pique quickly delivered a block to kill the danger, something that became a familiar sight as the game progressed.

Barca could have taken the lead when Messi latched onto a pass and was clean through on goal, albeit with a difficult angle, but his shot drifted wide.

Rakitic found himself in a similar position soon afterwards but he kept his nerve, calmly chipping over Courtois to score.

Barca were left fuming at halftime when Real captain Sergio Ramos appeared to strike Messi in the face after winning a tackle but the Spaniard escaped a booking, although he was shown a yellow card later in the game.

It was a rare moment of needle in an unusually uneventful game between Spain’s two biggest clubs.