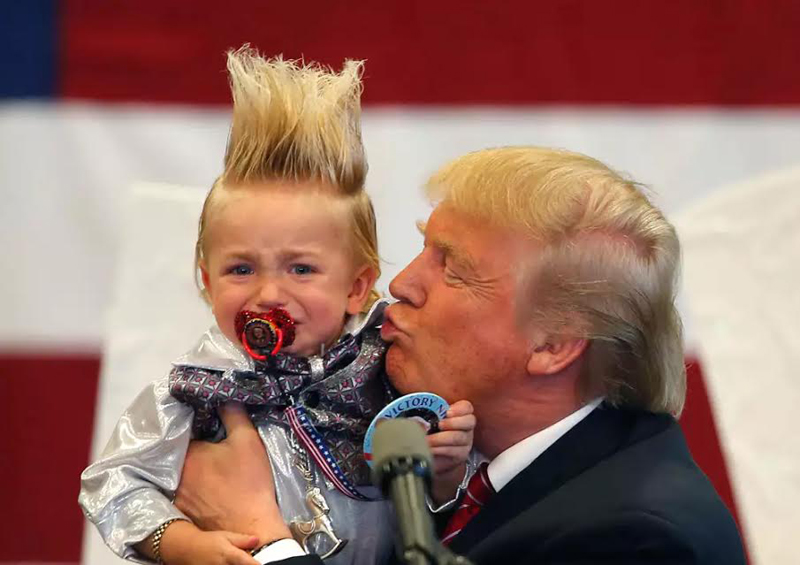 After hearing one of the Trump’s speeches, the first thing my 10-year-old son uttered was ‘Wow, what an attitude!’
The results of the US presidential election left me dumbfounded. Not because Hillary lost or Trump won but because the Obama days are coming to an end. However, as the saying goes, everything comes with an expiry date. The Obama period has ended and America beckons the beginning of a new anxious era.

I am not qualified to delve into politics but I am concerned about the human psychology portrayed by this election. With utmost ease Donald Trump was heard saying ‘I talk to a lot of people but my primary consultant is myself’, ‘I will be the greatest jobs president that God ever created’ and ‘The beauty of me is that I am very rich’ etc., etc.

Neither is there anything wrong with telling the world how rich or powerful you are, nor in being confident and egocentric, but people can easily distinguish between pride and arrogance. Narcissism was oozing out from his talks while his stance proclaimed a great sense of entitlement with amplified arrogance. After hearing one of the Trump’s speeches, the first thing my 10-year-old son uttered was ‘Wow, what an attitude!’ No, this is not the attitude I want my child to develop. It raised an alarm in me.

Roots of narcissism
Narcissism is a term that stems from the Greek mythology. Narcissus was a handsome man who fell in love with his own reflection in a pool of water and died gazing at it. It describes a personality trait that flaunts grandiosity, lacks empathy and indulges in self-admiration. Researchers are not sure whether narcissists are born or bred but they do reflect how we nurture our kids. The environment in which we raise our children has a direct relation to their personality traits when they grow up.

Most studies claim that children are not born narcissists. It’s the parents who plant a seed of this dangerous trait in them at an early age. We, as parents, constantly overload our children with incessant praise and put them high on a pedestal. This makes children feel they are special, unique and entitled. How I wish we all realized that we are giving our children a lonely life up on a pedestal.

Similarly, children who are neglected or have abusive parents also develop narcissism because they experience a desperate need to look after themselves and thus leads to extreme self-absorption as a survival instinct. Therefore, it is important to strike a balance, wherein children should be appreciated and encouraged if they achieve or even strive to achieve the desired goals, at the same time they should be given lessons in humility, empathy, and the joy of being one among others.

From cradle to adulthood
When a woman gets a fluttery feeling in her abdomen during pregnancy, it is due to those kicks by the fetus. It could be due to hiccups, hand movement, side-to-side turning, or somersaults by the baby. But the mother gets concerned thinking the baby needs something, perhaps a stoke or a rub or even a little chat and does everything to soothe the baby inside. Likewise, we don’t let any cry or whine go waste when the child is growing up.

We seldom say ‘no’ to our kids’ unending requests like ‘Can I have this toy?’ or ‘Can I have this gadget?’, followed by, ‘Can I have it right now?’ The list is endless. Any new commercial of toys, food, gadgets, or an outfit makes the child want it, and yes, we fall prey to their innocent requests. Not that I am against all this.

Love needs demonstration. Loving your child is a healthy sign but there is a thin line between making the child feel special and extra-special. If we cater to every little want and desire of our child, we foster a sense of false entitlement.

To help them develop self-confidence, we praise and over praise our children to the extent that we eventually shape them into entitled and selfish human beings.

Narcissism in children sprouts from the feeling that parents instill in them. A feeling of being a prized possession, extra special, overvalued and entitled.

I remember getting emotional seeing my child cry while dropping him off at his play school. I used to stay back at school for some time to see him get settled. I was surprised to hear from his teacher that when he found that I am gone he would act normal, played with the toys and recited those lovely rhymes. I stopped staying back. The problem was with me, not him. I made him feel special or should I say vulnerable by staying back in the school, and indirectly gave him a message that I’ll be there to rescue him whenever he puts up a fuss.

Where do we go wrong?
I remember an incident where a boy was giving a hard time to his mother as his cricket team wanted him out of the team because of his dismal form but his mother said, ‘I know you are a wonderful player but I guess the pitch conditions were bad today and that’s the reason you didn’t score runs. It’s not your fault.

How could your team ask you to leave?’ This is a usual reaction of a
parent.

Unfortunately, this is where we go wrong. Instead of telling the child that he needs more practice his mother blamed the pitch. We feel bad when our children get embarrassed or fail in a task. We take their failure as ours and go to any extend to rescue them from an unpleasant situation, somehow thinking that our bundle of joy doesn’t deserve the shame, hurt or humiliation. When we do this, we send a message that failure is not what they deserve and that we are there to rescue them from difficult situations. Hence, our children don’t get to experience the satisfaction derived from hard work, persistent effort and personal accomplishment.

Therefore it is important to understand children’s psyche and take corrective measures as soon as we realize that we are going overboard with our protective instincts. When children handle small conflicts and failure on their own, it helps them develop social-emotional skills. They learn how to get up, dust themselves and move forward. Most importantly, they learn to empathize and acquire coping mechanisms. This in turn helps them develop into resilient and mature people capable of facing the world, which may not be as comforting as their homes.

So, let’s make our children practice empathy as the renowned psychotherapist Alfred Alder defines it: ‘Seeing with the eyes of another, listening with the ears of another and feeling with the heart of another’. Only then they will understand that no human being is inherently superior to others. And there shall be no place for superiority or inferiority complex from now and in times to come.

The writer is a freelancer based in New Delhi

MADRID, March 29: Spain awoke to its third week under near-total lockdown on Sunday, as the government met to approve... Read More...

Counting of votes resumes in Udayapur-1, UML boycotts
37 minutes ago