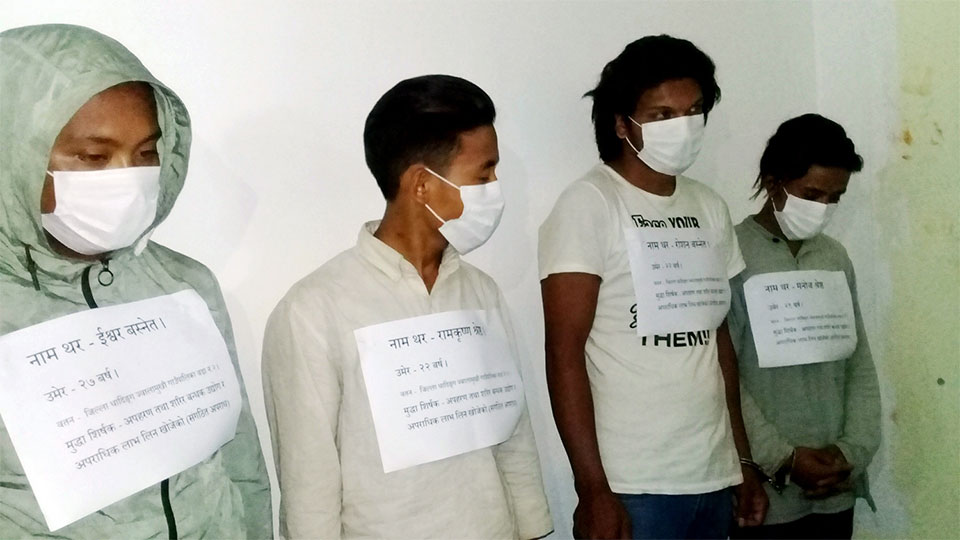 Police parading a gang involved in extortion by threatening industrialists impersonating representatives of the Indian intelligence agency 'RAW’ in Chitwan on Wednesday. (RSS)

RATNANAGAR (Chitwan), July 26: Police have busted a gang involved in extortion by threatening industrialists of Chitwan in guise of representative of the Indian intelligence agency 'RAW'.
The racketeers arrested were made public by organizing a press conference at the Chitwan District Police Office on Wednesday.

According to Superintendant of Police (SP) at Chitwan Police, Kumar Thapa, the master-mind of the incident who is absconding was serving with the Armed Police Force.

Other nine are his accomplice, shared Thapa after the preliminary investigation into the case.
He shared that the police nabbed them from the Sisneri Guest House nearby Bus Park in the capital on July 24. Those arrested are Iswor Basnet, 30, Jwalamukhi rural municipality-2 of Dhanding,, Roshan Basnet, 22, of same area and Manoj Shrestha, 20, and Ram Krishna Shrestha, 22, 0f same ward.

The master-mind Basnet was serving the APF, Sano Gaucharan, Kathmandu as a cop from 2065 to 2068 BS.

In the press conference, Police shared that the disguisers had issued death threat and demanded up to Rs 5 billion from a factory producing paper boxes. The name of the industrialist however is not disclosed.

The police investigation team had taken stock of the situation by frequenting the industry for the past 15 days. RSS

Border agent dies after being injured in Texas

KATHMANDU, April 17: Nepali businessmen at Rasuwagadhi are facing hassles after being denied of entrance passes to China. ... Read More...