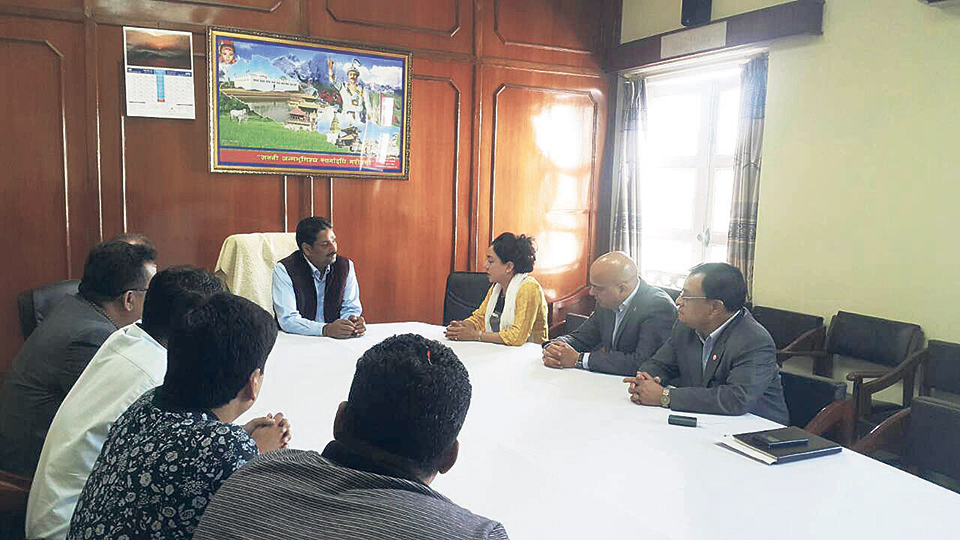 In this photo released by the Federation of Nepalese Chambers of Commerce and Industry (FNCCI), delegates of the FNCCI are seen at a meeting with the Minister for Supplies Shiva Kumar Mandal (center), in Kathmandu on Friday.

KATHMANDU, Sept 10: The two leading umbrella organizations of the private sector are now intensifying their lobbies for the protection of their members of Durbar Marg who have been accused of fleecing consumers by charging exorbitant prices on ‘branded goods’.

The Federation of Nepalese Chambers of Commerce and Industry (FNCCI) and Nepal Chamber of Commerce (NCC) have been piling pressure on the government to let go of the Durbar Marg traders without any action.

Terming the recent raids by the government authorities ‘an act of terrorizing the business community’, the FNCCI leaders argued with the Minister for Supplies, Shiva Kumar Mandal, that such initiative of the government has caused ‘frustration’ among the private sector.
The government had sealed half dozen stores in Durbar Marg after they were found overcharging consumers

“The sudden raids and sealing of some stores in Durbar Marg, a major trading hub where international branded goods are available, has terrorized traders,” the FNCCI said in a statement.
“The federation is ready to cooperate with the government to take action against anyone who goes against the law. But, the act of smearing the reputation of traders based on suspicions is not acceptable in any way,” the statement quoted Rana as telling Minister Mandal.

A team of Department of Supply Management and Protection of Consumers Interest led by Minister Mandal had sealed four outlets on Monday, while two more stores selling ‘branded items’ were sealed on Wednesday after they were found fleecing consumers by charging exorbitant prices. The department has been investigating these cases and asked the owners of the sealed stores to present themselves with necessary documents within three days.

The officials of the department maintain that the seal would be opened if the investigations prove them innocent while legal action will be initiated if they are found to be fleecing consumers.
According to officials, they are also seeking help of Inland Revenue Department and Revenue Investigation Department to investigate the possibility of under-invoicing and tax evasion.

In protest of the government’s raids, traders in Durbar Marg have resorted to indefinite shutdown of their businesses since Thursday while the FNCCI and the NCC are piling pressure on the minister to let the traders off the hook.

Similarly, NCC has also been lobbying through Minister of Commerce Min Bahadur Biswakarma to stop action against the traders. Meeting with Minister Biswakarma on Monday, an NCC delegation led by its president Rajesh Kazi Shrestha demanded the government to stop surprise market monitoring and raid of businesses.

The FNCCI delegation has urged Minister Mandal to open the seal of the stores. However, Minister Mandal said that he would not budge to the pressure of the private sector. He told Republica that action against the stores would be initiated if they were found guilty.

“We have carried out monitoring and sealed the stores following due legal procedures. The investigation is ongoing and those found to be breaking law and cheating consumers will face the legal action,” Mandal said.

A senior official at the department told Republica, requesting anonymity, that the leaders of the private sector, particularly FNCCI and NCC, have been trying to use political force to stop the investigation and action against the raided stores.

“There is a lot of pressure. But, we are not going to bow down against such pressure,” the official added.

KATHMANDU, Sept 8: Traders have shut down their businesses in Durbar Marg for an ‘indefinite period’ to protest the government’s raid... Read More...

KATHMANDU, September 7: Protesting against the government raid in branded outlets in the area, the Durbar Marg based retail outlets... Read More...