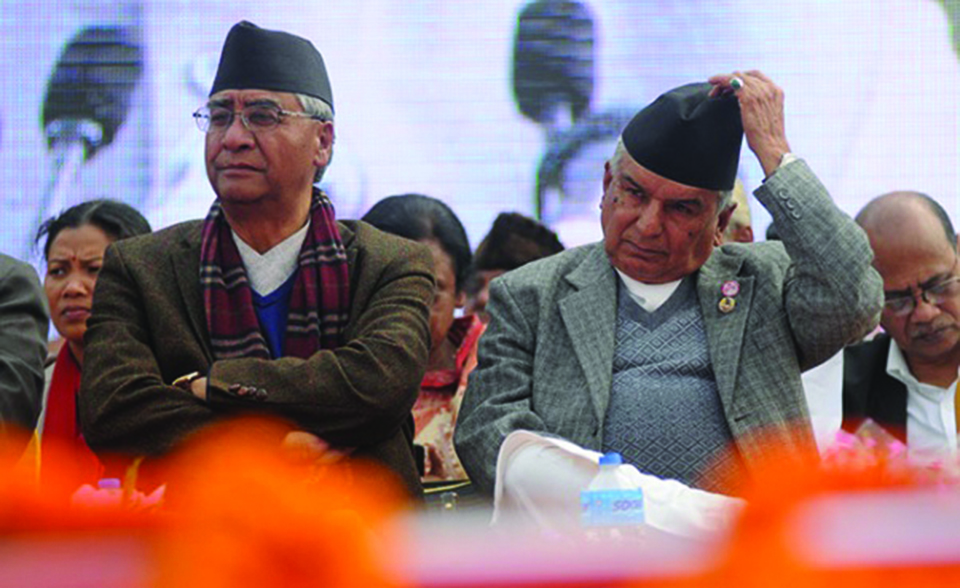 Why should Congress leave Socialist International with which it has long and intimate relation and join Progressive Alliance?

Much ahead of the conference day, the website of Progressive Alliance (PA), an alliance of social-democratic and progressive political parties founded in May, 2014, informed the world that the  international seminar on “Together for Progress and Justice: Facing new developments, supporting democracy and fostering renewal in times of change” was scheduled in Nepal for June 29 and 30. PA attempts to be an alternative force to Socialist International (SI) and spearheads a global movement in favor of “Democratic, Social and Ecological Progress” in the spirit of 21st century.

As the date for symposium approached, some unintended occurrences started in Kathmandu. The major fiasco was that former Prime Minister and President of Nepali Congress (NC) and head of co-hosting institution Sher Bahadur Deuba, who was supposed to deliver a welcome and keynote speech on “Supporting democracy and fostering renewal in times of change,” all of a sudden retreated from doing the graceful job leaving the much awaited moment in the lurch. Another leader Dr Ram Saran Mahat, who too was listed as speaker with his due consent earlier, inexplicably passed up the international forum. It has surprised not only delegates of convention, but also Nepali onlookers of political development.

Until a week before the conference, most of NC’s Central Executive Committee members were uniformed of the event being hosted by the NC itself. Even senior leaders like Ram Chandra Paudel were in the dark about the matter. The disappointment reached height when Paudel and other leaders like Prakashman Singh, Arjun Narsingh KC and Krishna Sitaula among others learnt about PA symposium from sources other than Nepali Congress secretariat. Hence, immediately KC and Singh took the lead to issue upfront public statement expressing their serious reservations on party’s stealthy modus-operandi on matters of international importance. They also instantly rejected any possibility of their support to the international event. In the midst of it, as situation aggravated, party president, who was all set to align with PA yet without taking party’s central level structures into confidence, finally backed off from his arguable stand. In a dramatic turn of event, the voice of dissent was joined by other office bearers including Vice-President and Secretary General.

The PA conference concluded in disenchantment. But, pertinent question is what messages the international delegates of the conference have taken away? They must have smelled poor state of affairs within NC. This act of NC has sent a few but critical messages to the participants of conference. The first among them is: the NC, which has glorious history of discharging national and international responsibilities, now utterly suffers from the challenge of internal democracy and transparency.

NC’s dissociation from SI, with which she has close relations since cold-war era, could be a subject of major departure in her international association. But why was such an issue of international magnitude kept secret?

The third important fallout is failure of Deuba to take into confidence the members who do not belong to his camp. His unreasonable degree of dependency on so-called loyalists on important policy matters has incited a political culture of clique within NC. This was one of the principal factors for NC’s lackluster performance in the elections last year. As a result, Nepal Communist Party has 216 seats in 334 member parliament today while NC is limited to 76 seats.

Nepali Congress is reeling under democratic-deficit and intraparty feuds with no place for values-based politics. Its popularity is descending persistently.  The situation within NC is such that neither the statute of party has been strictly adhered to nor inner-party democracy has optimally been exercised. Non-transparency and coterie politics rule the party. The adventurous attempt of aligning NC with Progressive Alliance, without taking the party into confidence, serves as an example. Such matters of international significance actually require in-depth debate within party. Otherwise it erodes NC’s democratic image and political prospects.

Nepali Congress, as a full-fledged member of SI, should ponder why it is needed to leave the SI- with which it has long and intimate relationship and join PA. If it is imperative do so, one must contemplate has NC ever tried to raise the issue of introducing reforms within the SI by dint of pertinent recommendations? Similarly, if NC, in the course of time, decides to have fraternal bond with PA at all, how will it serve larger interests of Nepal? Indeed, NC must prepare itself for these probable questions.

The author, an Alexander von Humboldt Fellow, is Nepal’s former Ambassador to UK and USA

All eyes now on Nepali Congress

KATHMANDU, Oct 24: With the CPN (Maoist Center) on Sunday formally deciding to back the impeachment motion against CIAA chief Lokman... Read More...

MCC will be passed without any amendments: PM Deuba
11 hours ago

Permission granted to cut around 7,000 trees to widen Mugling-Pokhara road
9 hours ago

Seven towers ready for construction of transmission line
12 hours ago