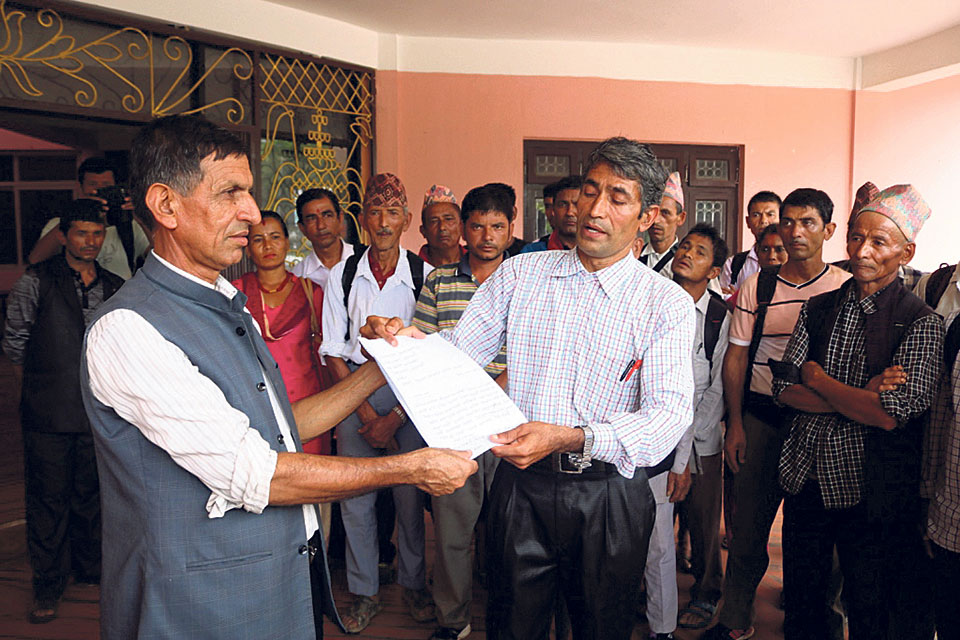 A representative of the quake victims of Gajuri Rural Municipality handsover a memorandum to the prime minister through Jagannath Nepal (left), chief of District Coordination Committee, Dhading in this recent picture. Photo: Sabita Shrestha/Republica

DHADING, Aug 8: This is a very busy time of the year for Shahadev Jamarkattel of Gajuri Rural Municipality-8 as he has to plant paddy before the monsoon rain subside. Despite the rush in the farms, he rushed to Dhadingbesi, the district headquarters, to push for the house grant provided to quake victims.

"Everyone is busy in planting paddy back in village but I had to come here for the grant,” he said while sharing that he had lost his house and assets to the earthquake of April 2015. Despite completing all the formalities that he knows of, the grant promised by the government for quake victims like him, has always eluded him.

"I am an earthquake victim. Despite completing all the formalities and visiting all the government offices concerned during the past three years, I have not received anything so far," he said. There are many like Jamarkattel in the rural municipality that are deprived of the grant.

Roofs of most of the cottages in which the quake victim families are living are covered with plastic rags. Only a few of these have corrugated sheets roofs.

"We faced a lot of hassles and we were tired of it. Authorities concerned did not care for our woes. So, we recently decided to hand over memorandum addressed to the prime minister," said Jamarkattel. "Though we were in the middle of paddy plantation season, we decided to take the matter to the prime minister. This time we are determined to get the grant and for that we are asking for the premier's help," he added.

Over 60 households from Gajuri Rural Municipality 7 and 8 complain of not receiving the grant despite being genuine victims, they say. These victims recently handed over a memorandum for the prime minister to Jagannath Nepal, chief of District Coordination Committee. Around 9,000 people had died and nearly double of that were injured by the 7.8 magnitude earthquake and its aftershocks. Quake victims here accuse Nepal Reconstruction Authority (NRA) officials of gross negligence in providing services to the victims. Even after three years of the disaster, many of the quake victims here claim that they have been excluded from the grants recipient list due to negligence of the field officials.

In lack of funds to construct or repair their houses, most of the quake victims in this rural municipality still live in huts. "Our families have been living in huts since the earthquake and as we don't have the resources to build new house, we are bound to continue living in the hut this winter also. So, thinking that the prime minister could help us, we decided to appeal him for help,” asserted Jamarkattel.

Quake victims displaced from their homes have been living in small huts. They are hard hit during the winter and monsoon seasons wherein they suffer from cold and various illnesses in lack of proper shelter.

"It's rainy season and we don't have proper roof to keep ourselves dry. Some of us lost our family members to cold last winter. Very soon, winter will be here and we are not prepared for it this year as well," Jamarkattel lamented.

Most of the cottages in which the quake victim families are living since the earthquake have roofs covered with plastic rags. Only a few of these have corrugated sheets roofs. "We are here putting means of our families' whole year's food at stake and we are hopeful that the prime minister will look into the matter and relieve us from the miseries,” he said.

"During the past three years we have made numerous appeals to the local bodies for help. It did not dawn to us until recently that we must bring our woes to the attention of the headquarters. We were making noise in village and nobody heard it, except us," Jamkattel said adding that it is then that the quake victims decided to approach the prime minister for help.

"Even after filling up forms and providing all the documents that they asked, the NRA officials disqualified most of us without giving any reasons. We still do not know what to do. We became homeless due to the earthquake and there is nothing left with us," Jamkattel asked. "So we decided to protest and demand our rights," he shared claiming that many of the genuine quake victims have been deprived of the grant by the government.

A Letter to the Nepali People about MCC
19 hours ago

‘Superman zipline’ to be launched in Pokhara soon
18 hours ago

Why is everybody silent on the ‘Constitutional Day awards fiasco’? asks Oli
17 hours ago