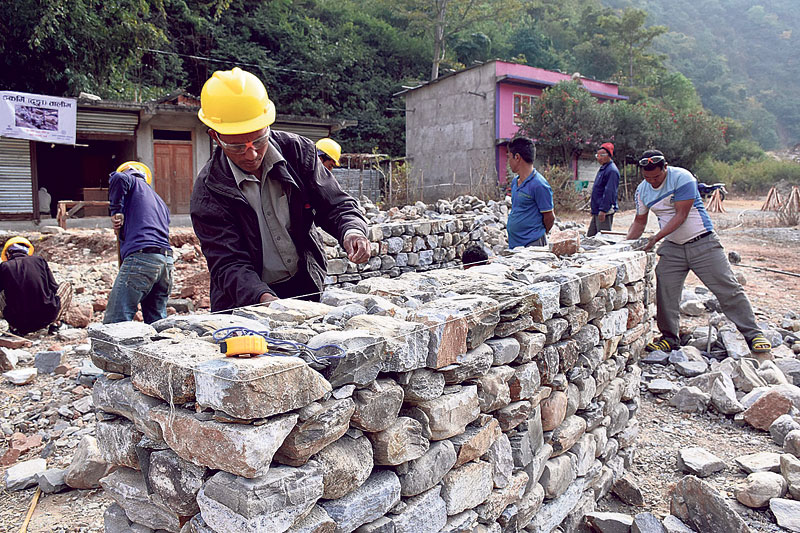 KAVRE, Nov 16:Rammaiya Bishwokarma of Chipleti village in Karve was more than happy when she received Rs 50,000 as the first installment of housing grant. As she was told more of the installment would be given to her, she planned about her house accordingly.

However, she is now in a great trouble after learning that her under-construction house has failed to meet the government guidelines or standard. This might mean that she would be ineligible to receive the remaining grant amount.

“I had started building a house even before the government provided Rs 50,000. We had been hearing that the government would help us and waited for a long time. But we got the money very late and we had already taken loan by the time we received government support. Getting the first installment was indeed a huge relief. But now, we are quite disappointed to know the details,” said the earthquake victim. “We did not have such knowledge. We started making house as per our own idea,” she added.

Bishwokarma had signed a deal for house reconstruction with the government in mid-April this year. She was hoping to get money without any delay. However, there was no sign of grant distribution and Bishwokarma was anxious about the arrival of winter. Then, she took the decision to start constructing her house.

“How could I wait? Winter was at the doorstep. The construction of the foundation and pillar was going on when people came and told me that I needed to stop it,” reported Bishwokarma. “They told me that pillar measuring 9’’X12’’ would disqualify me to get the next installments of the house grant. But we have already erected such pillars,” she lamented.

Bishwokarma had taken help of local construction workers and masons to build her house. She said that she visited the VDC office several times but she could not meet government engineer. “I did not have any idea about the standard of the house, but still I had visited VDC office several times seeking help of government staff. I could not find anyone there to help me. Then I took help of local mason to build my house,” she narrated her tale. “Now how can I destroy all this and rebuild it again when don’t have enough money?”

Bishwokarma isn’t the only one who has been building house violating the government guidelines. Shambhu Thapa of Thadogaun said that all those who gathered courage and could manage some loan to build their house have done the same thing. “How long could we wait? Last winter, we were nearly killed. Those living in comfortable houses do not understand how it is to spend winter in tents. When you have children and elderly people in your family, the problem compounds,” said Thapa. He added all the quake victims are in dilemma upon hearing that they would not be getting the remaining amount if found building houses disregarding the government set criteria. “Now we hear that the government is going to provide installments only to earthquake-resistant houses. What are we supposed to do? Need not they tell this to us on time? We are very much disturbed by the news,” he lamented.

Thapa’s two-story building is almost complete. He has already shifted there. “I am not sure whether it has met the standards. If the government does not support further, how would I settle the loan? I’m very tensed,” he said.

National Reconstruction Authority had initiated a pilot project of house grant in Kavre from April. The project lasted for three months. During the time, earthquake victims signed on documents as asked by the NRA staff. Neither the staff explained about the construction criteria to the victims in detail nor the victims tried to understand the details, and that was how the problem started.

“We indeed signed the documents, but without understanding the details. We were told to sign and we signed it,” said Bishwokarma. “Had the engineers been there, maybe we would have understood the whole process. But engineers were not available,” she added.

Construction of houses is going on in the entire village. The fast approaching winter has been forcing the quake victims to expedite the construction work. However, they are now in dilemma upon learning that they might be deprive of the remaining installment for not meeting the standards. They say that the government has thrown them in deep trouble.

“Houses are being built all over the village. And those houses are not as per the standard set by the government,” said acting Chief District Officer Bhimkanta Sharma.

The reconstruction authority had deployed 178 engineers in the district for monitoring the work under progress. However, many lapses have come to the fore.

According to an engineer with the NRA, Ashok Adhikari, implementation of the guidelines of the government is challenging. “It is not possible for the beneficiaries to exactly follow the checklist issued by the reconstruction authority. But until the 10 points in the list are correctly followed, it is not possible to make the house. We are understaffed and so checking things is not easy,” he said.

He further stated that the victims ‘have not accepted the model presented by the authority’. “Their needs did not match, so they went on building houses on their own style,” he added.

DHADING, April 21: It has been months since Bir Bahadur Tamang of Benighat Rorang-1 laid the foundations of his house... Read More...