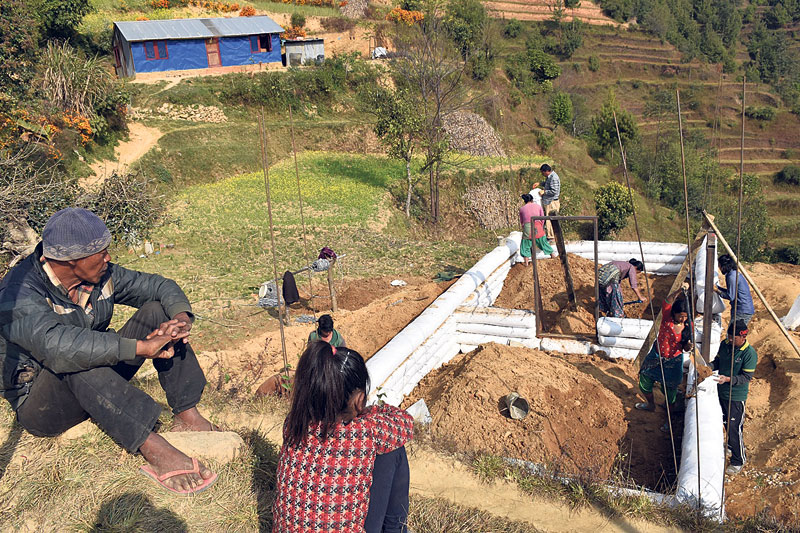 Birman Tamang (left) of Falame VDC, Kavre, looks at the construction of his neighbor’s house along with this grand daughter (right) in this recent picture. He, like many others in the village, has not received the first installment of the house construction grant pledged by the government. (Madhusudan Guragain/ Republica)

KAVRE, Nov 30: Something interesting is happening in Rayale village of Kavre district these days. After receiving the first installment of the house grant assistance provided by the state, most of the homeless earthquake victims have now geared up for constructing their new residences. However, not all are them are happy.

Birman Tamang of adjoining Falame village is engulfed in gloom and despair. Neither has he received the first installment of Rs 50,000, nor is he physically fit to earn for the family by doing physical labor. And these all has put him into a helpless situation.

“Along with my grandchildren I have a family of six. Though I used to work a little in the past, I have become very weak lately,” Tamang said adding that his family has not recieved the grant amount. “My asthma is getting severe. With the cold increasing by the day, I don’t know what will happen of me and my family this winter.”

His two-storey home was turned to rubbles in seconds by the earthquake last April. It did not spare even the cowshed. Though the family till then was relatively well off, the earthquake made them poor.

“I was advised by the villagers to submit application at the VDC for requesting government assistance. I had gone to the VDC office and completed all the procedures that I was asked to do. But I don’t know why the government did not provide the grant assistance that others like me have already received,” he muttered.

Tamang looks like a lost man these days. During our conversation he would sometimes look at the sky and sometimes would stop speaking for minutes. And yet at times he would try hard to stop the brimming tears from rolling out. “I am like a setting sun and I don’t know when I will set. I am worried about the future of my grandchildren,” he said looking at his granddaughter, who was sitting next to him.

Tamang has a regret. A non-government organization, whose name he could not remember, had offered to build house for quake victims in the village. The scheme was limited to disabled or single women only. Nevertheless, many of the village families, who Tamang said did not fit into the criteria, were able to convince the organization to help them in building houses. “But we thought it was not a good idea. We preferred to wait for the government’s help. But so far, the government has not provided any support.”

The family spent Rs 40,000 for clearing the house debris in the hope that when the grant comes through they would start building their new home. “I used to work until some months back and earn a little. I can’t do that any more. My grandson and his father earn for meeting the family expenses by doing labor jobs around.”

His grandson, who’s just 14, has stopped going to school. Instead, he earns wages by working as a labor for villagers who are constructing their houses. Even though the

Tamang family has lost all the assets to the earthquake, there are cultures to follow, apart from struggle for survival, as long as they live. Marriage and other cultural ceremonies can’t be avoided, he said. “Ghewas, marriages, bratamands and so on turn out to be expensive. It is a must for us to attend such invitations,” he said. For each marriage or bratamand ceremony you have to give Rs 205 and for Ghewa you have to give at least Rs 252 to the host family, he informed.

The devastating earthquake had destroyed all houses of Tamang’s village. Many organizations had rushed to the village post earthquake with food and clothes. One or two had extended support for building new house, he informed. “But everyone didn’t take their help.”

Mohan Tamang, Santabahadur Tamang, Dobate Tamang, Bhim and Bahadur Tamang, are among those who did not accept the assistance. While around 100 families of the village are still living in huts, fifty percent of them have started constructing their new home, Mohan informed. “We could not do anything. We thought that the government would take care of us,” he said.

Those who were partly helped by private and non profit organizations for constructing new houses have been collecting stones and sand on their own along with contributing the required labor.

Sambhu Prasad Adhikari, secretary at the Falame VDC, said that government has not been biased with victims like Birman and Mohan. He said that some banks which are supposed to provide the money have not been able to do so.

“Some the quake victims who were supposed to receive the grant through Sun Rise Bank had not recieved it until recently. But the Panauti branch of Nepal Bank is yet to release the amount to beneficiaries.”

Stating that the victims approach the VDC office every day for lodging complaints, he claimed that presently the banks were at fault for delaying the payments to the quake victims. He admitted that hundreds of families who were promised that they would get the first installment of the grant assistance before Dashain have not received yet.