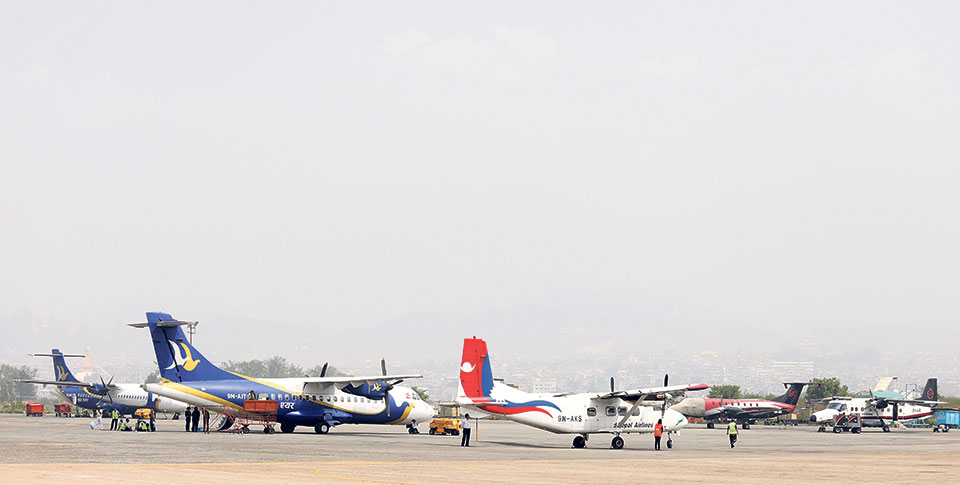 KATHMANDU, Sept 2: Qatar Airways has added a daily flight in the Kathmandu -- Doha sector, following extension of the Tribhuvan International Airport (TIA)'s operation of its international terminal to 21 hours. Currently, the airline company has been operating five flights daily in the sector.

Starting from Sunday morning, Qatar Airways has scheduled the additional flight to land in Kathmandu at 1AM and take off for Doha at 2AM. However, the airline will initially run it as a test flight, until October 27.

"If night flight runs smoothly, Qatar Airways will use this slot for regular flight," said Raj Kumar Chhetri, general manager of TIA. He further said that Fly Dubai and Wataniya are also preparing to extend their flights to the night slot, between 12–3AM, at the TIA.

TIA, the only international airport in the country had extended its daily operation hours to 21 on May 20 as per the commitment made by Minister for Culture, Tourism and Civil Aviation, Rabindra Adhikari, in his 100-day action plan. Qatar has become the first airline to start flight in the added slot.

"Our initiatives may take some time to give results," he said. "And now I think the TIA is improving both in terms of infrastructure and management." He further said that the extended hours have also eased Nepali airline companies operating international flights.

"Before this, we always had to work extra time for delayed flight of Nepal Airlines Corporation and Himalaya Airlines but now the problem has ended as the TIA has extended its operation hours,” he told Republica.

Meanwhile, starting from Saturday, the TIA will operate its domestic terminal for 22 hours, in order to reduce air traffic congestion during the upcoming festive season of Dashain and Tihar.

"The Ministry of Culture, Tourism and Civil Aviation has announced to bring the TIA into operation round the clock. We are working to gradually extend our operating hours," Chhetri told Republica.

Starting from Saturday, the domestic terminal will open an hour earlier in the morning, at 5AM. "We hope that the domestic flights will start taking off by 6AM so that passengers are not bothered by flight delays during the festive season."

September to November is high season for tourists in Nepal, and during these months, domestic airliners run additional flights to cater to both the domestic travelers and foreign tourists. In the Kathmandu-Lukla sector alone, companies operate as many as 15 flights a day during this season.

KATHMANDU, Jan 12: Qatar Airways on Tuesday resumed flights to Riyadh in the Kingdom of Saudi Arabia with a daily service. Read More...

KATHMANDU, Feb 15: Qatar Airways has welcomed the publication of ‘Doha Declaration’ -- a manifesto that calls for a serious... Read More...