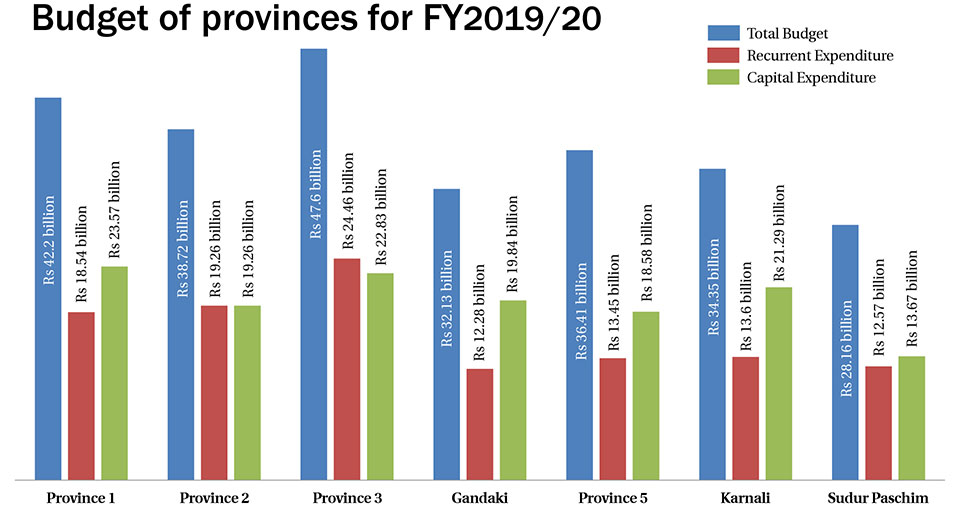 KATHMANDU, June 17: Provincial governments have brought budgets of a total size of Rs 259.57 billion for the upcoming fiscal year – FY2019/20.

Presenting budgets in the provincial parliaments, finance ministers of respective provincial governments have unveiled expenditure plans for their provinces as well as the sources of resources for such expenditures.

Out of the total budget, Rs 114.16 billion has been allocated under recurrent budget, while remaining Rs 145.41 billion has been set aside for capital expenditures and financial management. Most of the expenditures will be financed from the internal revenue, royalty and revenue shared from the central government, fiscal transfers and carry over saving from the current fiscal year. Three provinces have announced that they will raise domestic debt to finance the deficit budget.

This is the second budget of the provincial governments after the country entered into federal setup. All provinces have struggled to implement their first budget. Total budget spending by the provinces averages below 25 percent even when the fiscal year-end is a month away. Provincial finance ministers have attributed this to delay in setting up spending institutions, management and adjustment of staff by the central government and confusions over jurisdictions of many development projects.

Most of the provinces have prioritized agriculture, infrastructure and tourism for the upcoming fiscal year. While giving continuity to the projects and programs of the current fiscal year, many provinces have introduced new programs in the new budget.

While Province 3 has announced that it will provide salary of additional one month to the government staff working there for three months, it has announced a plan to build Pushpa Lal Provincial Ring Road (Ramechhap-Dolakha-Sindhupalchowk-Nuwakot-Dhading-Chitwan-Makwanpur-Sindhuli-Kavre) and Post Bahadur Bogati Tunnel Way (Bhimphedi-Kulekhani) as provincial pride projects in collaboration and support of federal government.

All provincial governments, except Province 5, have followed the suit of the central government in providing direct budget to the lawmakers. Province 2 has announced that it will provide Rs 10 million budget to directly elected provincial assembly member to implement development works in their constituency in addition to Rs 20 million under the constitutional development program. Moving a step ahead of the federal government, the provincial government will provide Rs 10 million even to provincial member elected under the proportional representation system. The province has given continuity to its ‘Educate Daughter, Save Daughter’ program, allocating Rs 393.3 million for the upcoming fiscal year.

Among others, Sudur Paschim provincial government has set aside Rs 440 million for the Chief Minister Integrated Agro and Livestock Development Program under “Build Model Agro Village on Your Own” campaign in partnership with local units. Under this program, each 88 local units in the province will receive Rs 5 million for the development of agro product.

Republica has compiled budget reports from seven provinces with inputs from its local reports: 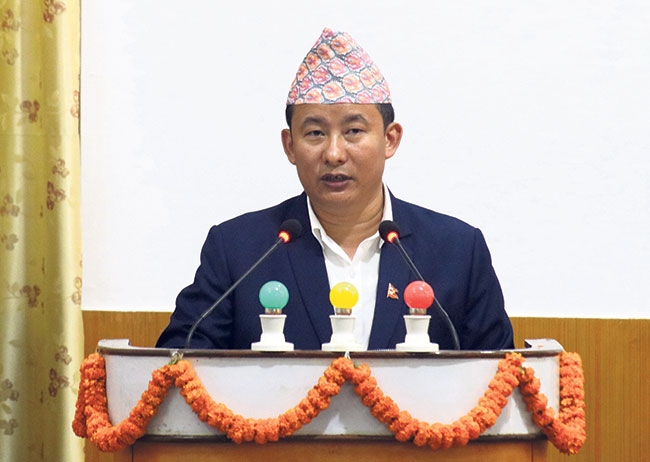 In his budget speech, Minister Angbo said that the primary objective of the budget would be to maximize productivity by increasing production via optimum utilization of resources and creation of employment opportunities and alleviation of poverty.

Among others, the province has prioritized preparation of economic, physical and social infrastructures for development of a ‘clean, content and prosperous province’ alongside social justice while preparing a socialist economic base.

Minister Angbo also stated that good governance will be promoted to ensure the effectiveness, accountability and participation of public service.

The province aims to raise internal revenue of Rs 3.86 billion, and receive Rs 10.52 billion through revenue sharing and Rs 21.21 billion from the federal government. Similarly, it will carry over Rs 6.61 billion from the budget of the current fiscal year.

Presenting his budget speech in the provincial assembly on Sunday, Ministry of Economic Affairs and Projects, Bijay Kumar Yadav, has said that the province will spend Rs 19.11 billion for recurrent expenditure and Rs 19.26 billion for capital expenditure.

In his budget speech, Minister Yadav said that the provincial government has prioritized agricultural and non-agricultural sector to improve livelihood of the people.

The budget has also given priority to production of skilled and technology-friendly human resources and creating investment-friendly environment in the province as well as ensuring good governance.

According to Yadav, the province aims to raise Rs 13.54 billion from internal revenue. Similarly, it aims to get Rs 16.17 billion from grants from the federal government. It plans to carry over Rs 7.7 billion from surplus budget from the current fiscal year, while it plans to meet resources shortfall of Rs 10.3 million by raising domestic debt. 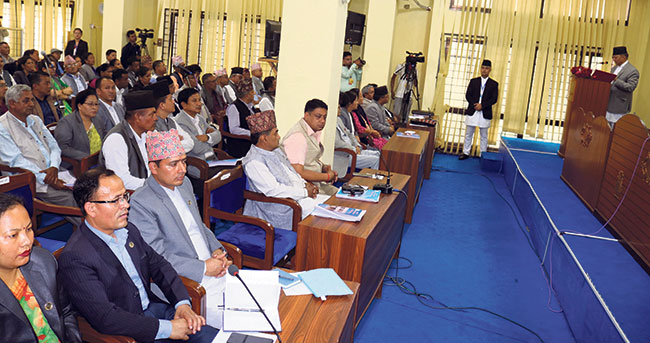 Similarly, the budget will prioritize infrastructure development, education, health and social sector. Likewise, agricultural modernization and industrialization are also in priority of the provincial government.

Similarly, Dhungel said that forest and environment conservation, preservation of cultural heritage for tourism promotion and development will also be in the priority of the provincial government.

The province aims to raise internal revenue of Rs 15.49 billion and receive Rs 18.6 billion through federal grants. The provincial government will carry over Rs 6.75 billion from surplus revenue from the current fiscal year, while it plans to raise Rs 7.3 billion from other sources. 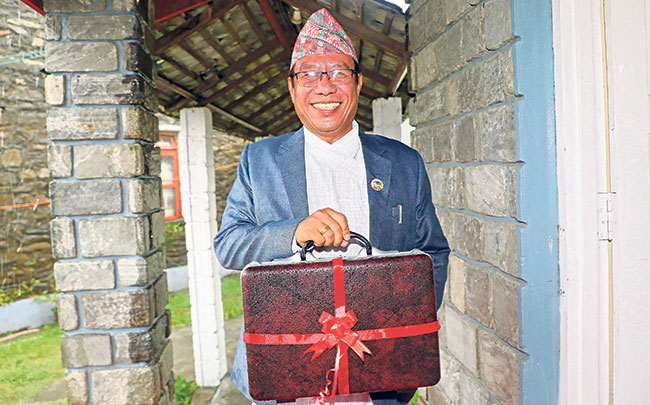 Agri, tourism, energy in priority for Gandaki
Minister for Economic Affairs and Projects Kiran Gurung on Sunday presented a budget of Rs 32.13 billion for the upcoming fiscal year  – FY2019/20 for Gandaki Province.

In his budget speech, the minister mentioned that the primary objectives of the budget would be to maximize productivity and productions to create a stable economy by creating jobs and alleviating poverty as well as by focusing on balanced investment in infrastructure development. The provincial government will make proper use of internal resources as well as promote good governance, among others, according to Gurung.

Similarly, the province will focus on tourism, energy, agriculture, industry and skilled manpower to give an impetus to its economy.

Of the budget source, the province aims to raise internal revenue of Rs 3.27 billion, while it aims to meet resources shortfall through fiscal grants. It plans to meet the revenue shortfall of Rs 1.18 billion through loans.

Agri, tourism, infra get priority in Province 5
Chief Minister Shankar Pokharel, who is also looking after economic affairs and projects portfolio, presented a budget of Rs 36.41 billion for Province 5 for the upcoming fiscal year – FY2019/20.

Of the total budget, Rs 13.45 billion has been allocated for recurrent expenditure, whereas the remaining budget for is for development spending.

Presenting the budget, Pokharel said that the primary objective of the budget will be to maximize economic growth through social justice and creation of employment opportunities. Other objectives include poverty alleviation and improve life standard of citizens, and create a society free of domestic violence and discrimination while implementing programs directed toward betterment of these groups.

The province aims to raise internal revenue of Rs 4.59 billion, while it aims to receive Rs 9.91 billion through revenue sharing. Similarly, it plans to collect Rs 300 million from royalty, while it will carry over Rs 5 billion from revenue surplus of the current fiscal year.

It intends to meet the remaining resources shortfall through fiscal grants. 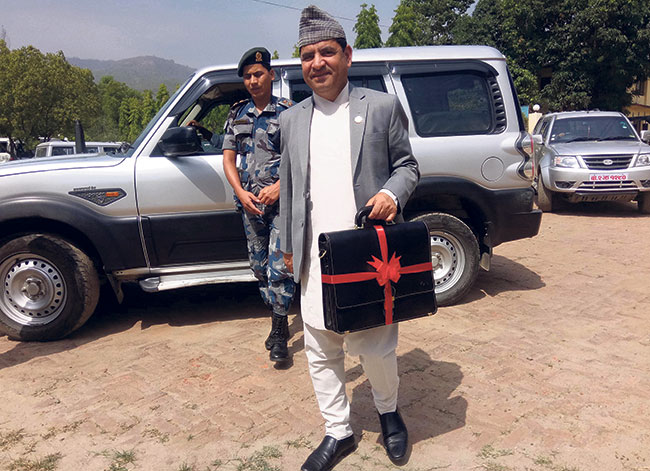 The provincial government has given priority to expansion of transportation services through development of roads infrastructure. In his budget speech, Minister Jwala said that the province will introduce roads, bridges, hydropower, drinking water and irrigation projects through Chief Minister Infrastructure Development Program.

The provincial government has allocated Rs 1.20 billion for this program.

The provincial government has also said that it would deposit Rs 1,000 after the birth of a daughter under ‘Daughter’s Bank Account: Security for Life’ program. Similarly, it will deposit Rs 500 to each such account until the girl become 20 years old. The government has allocated Rs 70 million for the program. 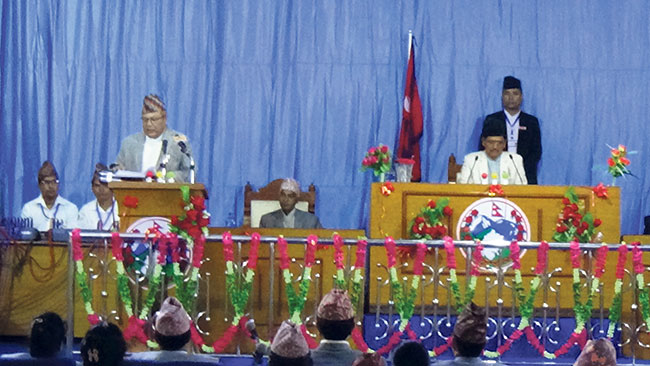 Sudur Paschim to prioritize agriculture and infrastructure
Minister for Economirs and Planning Jhapat Bohara of Sudur Paschim Province has allocated a budget of Rs 28.16 billion for the upcoming fiscal year – FY2019/20.

The government has given priority for modernization and professionalism of the agriculture sector to increase the income of farmers. Programs such as providing grants to farmers in seeds, improving irrigation, constructing chilling centers, providing trainings to farmers are the main priorities of this budget. Toward this end, Rs 1.16 billion has been allocated for nine districts for irrigation, and Rs 790.9 million for drinking water.

Similarly, under the program ‘one local unit one production’, it has been mentioned that one constituency will operate two innovative industries. Budget of Rs 30 million will be allocated for ‘Khaptad Integrated Tourism Development’ program.

‘We have given priority to agricultural and infrastructural development’, said Minister Bohora, while announcing the budget on Sunday.

KATHAMNDU, June 15: All seven federal provinces have tabled their budgets and programs for the next fiscal year in their respective... Read More...

Provinces to present their budgets today

KATHMANDU, June 15: The provincial governments will present their budget for fiscal year 2018-2019 today in their respective provincial assemblies. Read More...