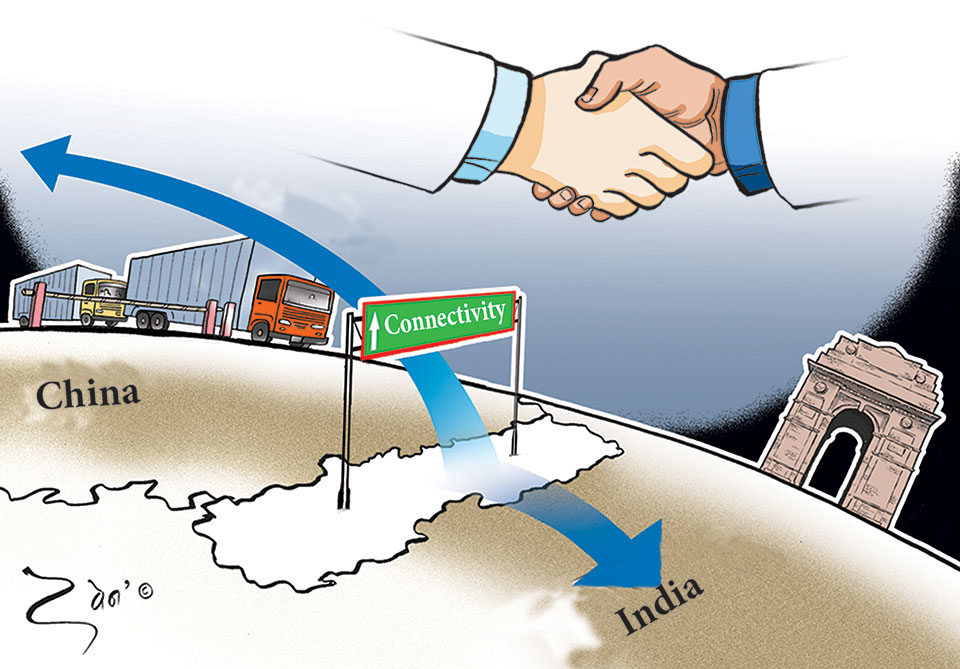 Small and vulnerable economies are left behind in the realm of strategic and defense competition that normally takes place among the bigger and militarily strong nations. There are overt and covert efforts among developed and rising economies to grab the global economic and strategic power. In this region, China and India are on this run. The former is asserting its defense posture in South China Sea and aspire to lead the global economic processes, advocating rules-based trading system, and pulling the global financial architectures under the rubric of New Development Bank, Asian Infrastructure Development Bank and Belt and Road Initiative (BRI). India, on the other hand, is aspiring to play a greater role in Bretton Woods institutions (the World Bank and IMF) and a permanent seat in the UN Security Council in its expanded form.

Nepal as a least developed country bordering with the two rising economies of Asia can leverage its locational advantage for achieving greater economic advantage to the nation and its people.

Nepal maintains a long historical relationship with both neighbors. The history of engagement with China-Tibet is beset with conflict and peace at various times, espoused under the interest of trade and travel. The latest in the series was Thapathali Treaty signed in January 1856 which provided basis of conducting bilateral trade and politico-economic relations between Nepal and Tibet of China until new treaties were signed after 1950s and onwards. The treaty provided additional protection measures to Nepali traders in Lhasa and Nepali mission at the level of courtier was established in Tibet.

The bilateral relation between Nepal and India goes back to centuries as both countries share a common border with easier accessibility. The bilateral relationship is not confined to economic area but also stretches over the social, cultural and religious planks. Even today, India is the most important trading partner of Nepal, covering almost two-third trade of Nepal, a big investor and source of development assistance.
Being a close neighbor with a long and porous border, the bilateral engagement with India is naturally both intensive and extensive.

Regionalism vs Bilateralism
It is said that regional and multilateral processes are best suited to the weaker economies, as such forums provide for making collective efforts of the like-minded countries to push their interest and agenda among the group of nations. In recent years, developed countries and stronger economies like UK and USA are moving toward the bilateral approach of engagement—UK under the plank of Brexit, and US by withdrawing from trans-pacific and NAFTA agreement. The World Trade Organization is in dilemma as the multilateral process is thawed on the rise of nationalism and protectionism.

Nepal needs to pursue both approaches in a careful way so as to reinforce the economic integration processes for enhancing welfare, growth, and employment to the people. The regional and multilateral mechanisms explore ways and means of fair and equitable distribution of benefits doled out to the developing and least developed countries for greater market access, participation in the global value chains, and capacity development for trade. Norms established in the regional and multilateral forums provide input for negotiating the bilateral provisions. Nepal needs to make use of these forums in order to harness economic benefits from the stellar progress of the neighbors both in north and south.

Mitigating deficit
The balance of payment in Nepal is nose-diving as import is growing at a faster speed and export is stagnant. Still government has not come up with credible plan to check and reverse the situation of adverse trade balance. The selection of the product and their development along the value chain is something that could be considered in reducing the burgeoning trade deficit. Participation in the trade fair abroad has remained as reward of foreign trips to the government officials without any fruition on the ground.

In November 2018, government of China organized China International Import Expo in order to promote the import of foreign goods into China, where importers in China made deals to import almost USD 58 billion worth of goods from foreign countries. But, there is no information as to how much amount of deal is made by the Nepali exporters who participated in the event with support from the government.  There are immense potentials to promote goods in the neighboring states of India, but promotional measures targeting these markets are neglected due to obvious reasons.

Increasing production and removing trade barriers should remain as prime agenda of trade diplomacy for Nepal. Being a landlocked country with inhospitable terrain, Nepal should always focus on transport and connectivity in order to promote the economic activities including trade and investment. This requires enhancing engagement with China through participation in BRI and transit transport arrangements; implementation of quadrilateral transport arrangement of the BBIN sub-region, and expanding the reach to south-east Asian countries under the BIMSTEC transport agreements. A good transport network connected with India and China could be a beacon for Nepal to provide transit passage between these countries in the days ahead.

Political leaders in Nepal often engage in political wrangling that simply harms the country’s economic and diplomatic interest. Statement of a party president on Venezuela’s political mess and subsequent handling of the issue by the ruling party and the government has demonstrated the frivolous character of the nation. A small country aspiring for economic prosperity with the support of its neighbors and development partners should exhibit maturity in dealing with foreign policy issue and refrain from polemical behavior being exhibited from time to time.