Project starts construction but yet to decide over land acquisition 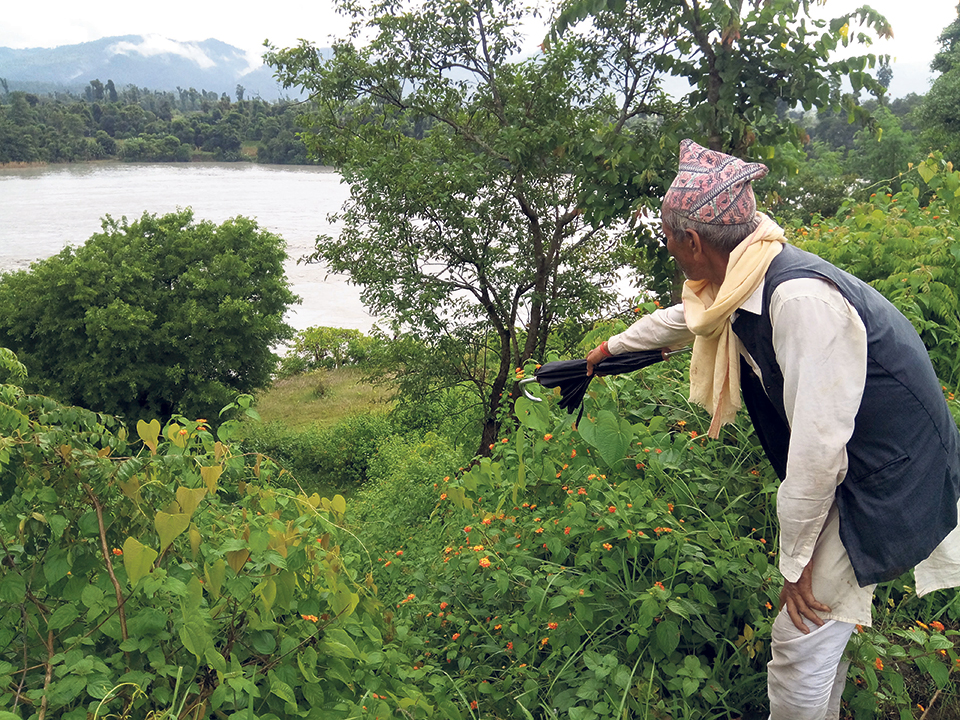 A man showing his land which will be inundated after the construction of the dam | Photo: Nagendra Upadhyaya / Republica

SURKHET, Aug 28: After the construction of a dam on Bheri River in Chiple under the Bheri Babai Multipurpose Project gets completed, about one bigha of land belonging to Gehendra Pandey of Lekhbasi Municipality-1 will be inundated. The land currently has a house and a mill. The project is yet to discuss land acquisition with him. The locals of the affected areas are in dismay since the project is yet to decide about the land acquisition and compensation.

Five years ago, the project had conducted a survey of the areas which will be affected by the project. According to the locals, the project has not discussed or coordinated with them about the land acquisition since then.

“They have not discussed anything with us even though the tunnel is near completion,” Pandey said, adding, “If we don't get proper compensation, we won't leave our land.” The locals are growing restless due to the negligence shown by the project in land acquisition and compensation.

The survey conducted five years ago had estimated that 35 hectares of land in Bheriganaga, Lokbesi and Gurvakot municipalities would be inundated due to the project. The locals are doubtful of the estimates made by the survey. The survey was conducted in winter season when the water level in the river was just 80 cubic meters per second.

The locals want another survey of the affected area. According to the survey, a total of 13 kattha of land in Gurvakot-13 and Bherganaga-14 belonging to Narayan Dutta Poudel will be inundated due to the project. However, Poudel is dissatisfied over the estimates made by the project.

“Hundreds of hectares of land on the banks of Bheri will be inundated after a 15-meter tall dam is constructed at Chiple,” he said, “We will not accept the estimates of a survey conducted in dry season.”

The project was started with the aim of generating 48 megawatts of hydroelectricity by diverting the water from Bheri River to Chiple of Bheriganga-9 as well as providing irrigation facility to 51,000 hectares of land in Banke and Bardiya. A 12 kilometers long tunnel through Chure range will be needed to divert the water to Chiple. According to the project office, 7.3 kilometers of the tunnel has already been completed. If the construction works are carried out in the current pace, the tunnel will be ready by March. The government has set the aim of completing the national pride project in four years.

KATHMANDU, July 16: A member of the Truth and Reconciliation Commission (TRC) has criticized a recent TRC decision to assign... Read More...