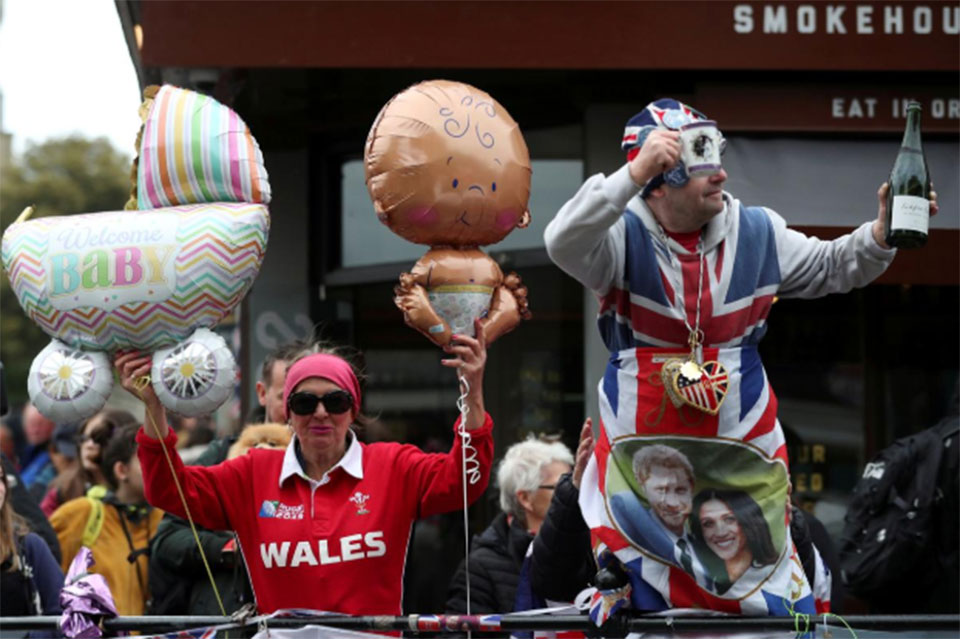 People celebrate outside Windsor Castle after Britain's Meghan, the Duchess of Sussex gave birth to a boy, in Windsor, Britain May 6, 2019. REUTERS/Hannah McKay

WINDSOR, May 7: A day after the birth of their baby boy to a global fanfare, Prince Harry and his wife Meghan on Tuesday were considering names for the newest member of the British royal family and when to show him off to the world.

Meghan gave birth in the early hours of Monday morning to the boy, the seventh-in-line to the British throne, leaving his father, the Queen’s grandson, and royal fans across the world thrilled and enthralled.

“I am so incredibly proud of my wife and, as every father and parent would ever say your baby is absolutely amazing, this little thing is absolutely to die for,” Harry said.

Few details about the birth have been released by Buckingham Palace with the announcement itself a mix of traditional and modernity which many say the baby himself represents, being the first mixed race child to be born into a senior position in British royalty in recent history.

The news was relayed on an ceremonial easel outside the palace having already been splashed “It’s a Boy!” on the couple’s Instagram account, attracting more than 2.6 million “likes”.

It was not clear whether the birth took place at the couple’s home, Frogmore Cottage on the estate of Windsor Castle where they married in a lavish ceremony in May last year, or if Meghan had been rushed to a London hospital as a number of British newspapers reported.

So far, Harry and his aides have merely confirmed the boy weighed 7 lbs 3oz (3.26 kg) and that Meghan and the couple’s first child were both healthy and well.

Celebrities and world leaders were among those to send in messages of congratulations to the couple, a reflection of the star status of Harry, 34, and former U.S. actress Meghan, 37.

“Congratulations, Meghan and Harry! Barack and I are so thrilled for both of you and can’t wait to meet him,” former U.S. First Lady Michelle Obama said on Twitter.

Harry and Meghan decided to eschew the recent royal tradition of posing for photographs with their new baby hours after the birth, leaving the world’s media and royal fans waiting for a first glimpse of the boy who is entitled to both British and American citizenship.

“We’ll be seeing you guys in probably two days time, as planned, as a family to share it with you guys and so everyone can see the baby,” Harry told reporters on Monday.

“We’re still thinking about names,” Harry said. “The baby’s a little bit overdue so we’ve had a little bit of time to think about it ... that’s the next bit.”

Bookmakers have James, Alexander, Albert, Philip, and Arthur as the favourite names, although other suggestions include Spencer, which was the surname of Harry’s late mother Princess Diana.

The baby, the eighth great-grandchild of 93-year-old Elizabeth, the world’s longest-reigning monarch, will not automatically be a prince or a princess or be known as “His Royal Highness” unless the queen issues a decree.

However, when Elizabeth is succeeded by Harry’s father Prince Charles, royal rules mean the boy would then have such titles.

“It’s been the most amazing experience I could ever possibly imagine,” Harry said. “How any woman does what they do is beyond comprehension.”

WINDSOR, May 6: Meghan, the Duchess of Sussex and wife of Britain’s Prince Harry, gave birth to a boy on... Read More...

Samuel L. Jackson along with Prince Harry and Meghan are some of the individuals who will be recognized at the... Read More...

Britain’s Prince Harry and his wife Meghan visited Canada House in London on Tuesday to thank the High Commissioner for... Read More...

50,000 metric tons of wheat required to address shortage
22 minutes ago