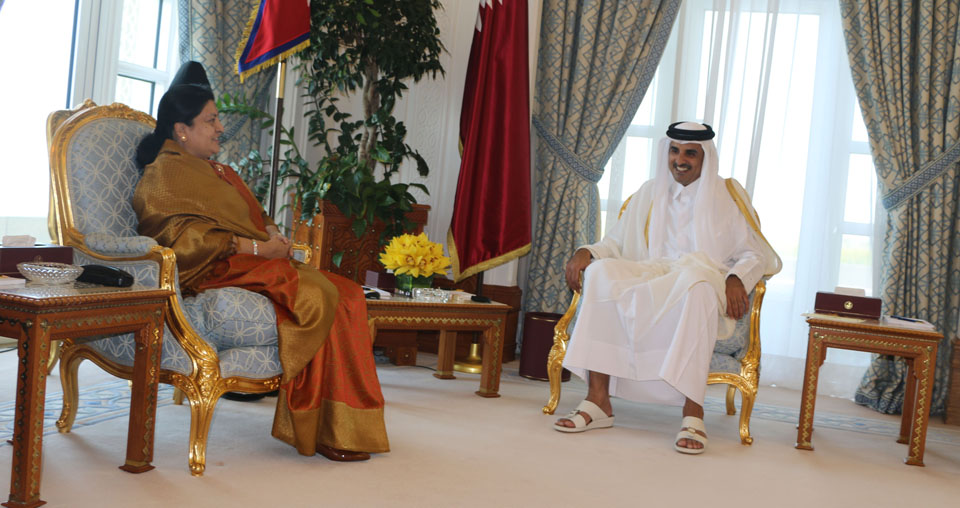 KATHMANDU, Nov 1: President Bidya Devi Bhandari will return home after her four days official state visit to Qatar at the invitation of the Amir of the State of Qatar Sheikh Tamim Bin Hamad Al Thani.

At Qatar, the president addressed met with the Amir of Qatar and various dignitaries, including co-founder rand the Chairperson of Qatar Foundation Sheikha Moza bint Nasser. The president focused on strengthening bilateral and diplomatic relationships between the two countries.

She also visited the Qatar National Library and the National Museum of Qatar. Impressed by the library, the President stressed the establishment of such library in Nepal, and said a Nepali team would be sent to Qatar soon to carry out a study in this regard.

Nepal and Qatar also signed two MoUs. The first facilitates the visits of diplomatic, governmental and special passport bearers without visa. Another agreement was signed on exchange of bilateral cooperation on agriculture and food security. Bhandari was accompanied by Minister for Foreign Affairs Pradeep Gyawali, Foreign Secretary Shanker Das Bairagi and other high-level officials from the president’s office and the foreign ministry.

She also called upon Nepali diasporas in Qatar to make investments in Nepal and join hands in the government's vision to aid the nation’s development and prosperity. She added that the government has created investment friendly environment and developed laws for the same with the establishment of political stability in Nepal.

Bhandari will arrive today from Qatar at 07:00 PM.