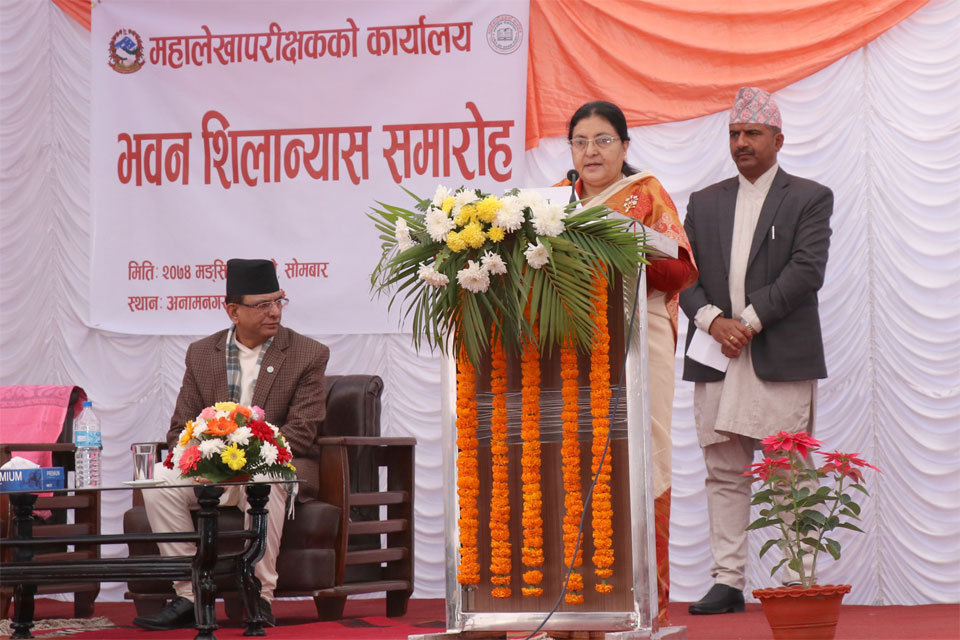 KATHMANDU, Dec 5: President Bidhya Devi Bhandari laid a foundation for the building of Office of Auditor General amid a program in Anamnagar of Kathmandu on Monday.

The nine-story building sprawled in 10 ropani of land is being built with an investment of Rs 692 million. The building is estimated to be ready by September 2019.

Lumini/Gauri Parbati/Shanti JV has won the contract to build the OAG's office building.
According to OAG, the building will have 11,159 square meters of office space. It will have two floors under the ground and seven floors above the ground.

OAG had to leave its old building after the earthquakes of 2015. It is currently operating from rented spaces Employees Provident Fund (EPF) building at Pulchowk, Lalitpur.
Officials of constitutional bodies, chief secretary and secretaries, among others, were present in the program.

Speaking at the program, President Bhandari suggested to the OAG to pay attention to improving public service delivery, ensuring sustainable development as well as growth of production and productivity as well as providing an in-depth analysis of public financial management, among others.

No decision on home ministry leadership until full text of SC’s verdict on Rabi Lamichhane is out: PM Dahal
12 minutes ago

Pokhara-Baglung Highway to be closed for upgrading
29 minutes ago