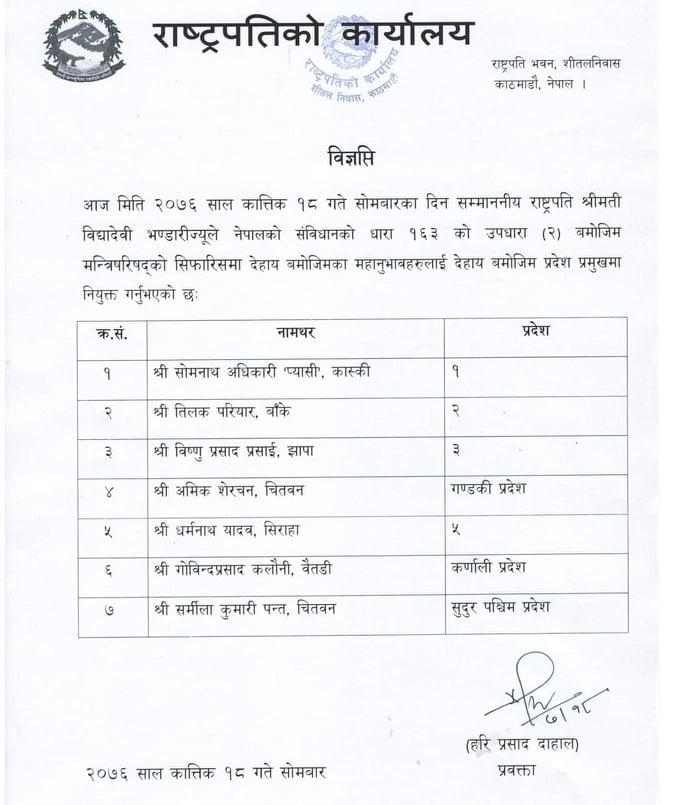 KATHMANDU, Nov 5: A day after sacking the governors of all seven provinces appointed by the previous Nepali Congress government, President Bidya Bhandari has appointed governors in all the provinces as per the recommendation of the government on Monday evening. Their swearing-in has been scheduled for Tuesday.

Shortly after the ruling party recommended the names of governors, a meeting of cabinet on Monday afternoon had recommended President Bidya Devi Bhandari to appoint the governors.

Earlier in the day, a secretariat meeting of the NCP had selected the governor nominees. The meeting held at Baluwatar, the residence of Prime Minister KP Oli, had selected the nominees as per an understanding among the top leaders.

Sherchan, Pariyar and Tripathi represent the former Maoist party whereas the rest are said to be close to Prime Minister Oli. A section of leaders led by senior leader Madhav Kumar Nepal have expressed their dissatisfaction over the nominations.

Expressing his disagreement over the nominations, leader Nepal has reportedly registered a note of dissent.

Sherchan is a veteran communist leader. He was a key leader of the then Seven-Party Alliance formed to fight against the royal coup. In the aftermath of the royal coup, the alliance in 2006 launched the People’s Movement-II, which ultimately forced the monarchists to return people’s power to the parliament. Sherchan was appointed Deputy Prime Minister and Minister for Health and Population in the Girija Prasad Koirala-led government that was formed after King Gyanendra reinstated the parliament.

Adhikari is a senior communist leader from Syangja. He was the head of the CPN-UML’s election commission until the party merged with the CPN (Maoist Center) to form the NCP.

Adhikari, who identifies him with the nickname Pyasi, was among a few pro-democracy candidates who were elected to the Rastriya Panchayat, the legislature during the party-less Panchayat system, when the then semi-underground communist party decided to contest the elections.

He became focus of public attention when he voiced for restoration of democracy in the Rastriya Panchayat.

Pariyar is a former Maoist leader. He was underground when the party launched armed struggle in 1996. He was elected lawmaker from Banke after the party joined mainstream politics. He had briefly defected to the Mohan Baidya’s splinter Maoist party and later returned to Pushpa Kamal Dahal’s party.

Prasai is a seasoned communist leader. He had joined politics as a member of the then CPN-ML at a time when the party launched Jhapa uprising in 2028 BS. He remained engaged in local politics in Jhapa. The NCP had fielded him as mayoral candidate of Mechi Municipality in 2017 local elections but he lost the race to Nepali Congress’ Bimal Acharya.

Former teacher Yadav is a communist leader from Siraha district. He was aligned with the CPN-ML when the  Jhapa uprising began from eastern Nepal.

Kalauni is a communist leader from Dadeldhura. He had contested three parliamentary elections in 1994, 2000 and 2008 but never won.

Tripathi is a conflict victim. Her husband, Gyanendra, was disappeared by the security forces during the insurgency. She hails from Chitwan.

KATHMANDU, Sept 23: Government has been recommended apolitical figure to be appointed as Governor of provinces. ... Read More...

Admitting defeat, Thapa says: I condemn the interference of Nirmal Niwas
1 hour ago