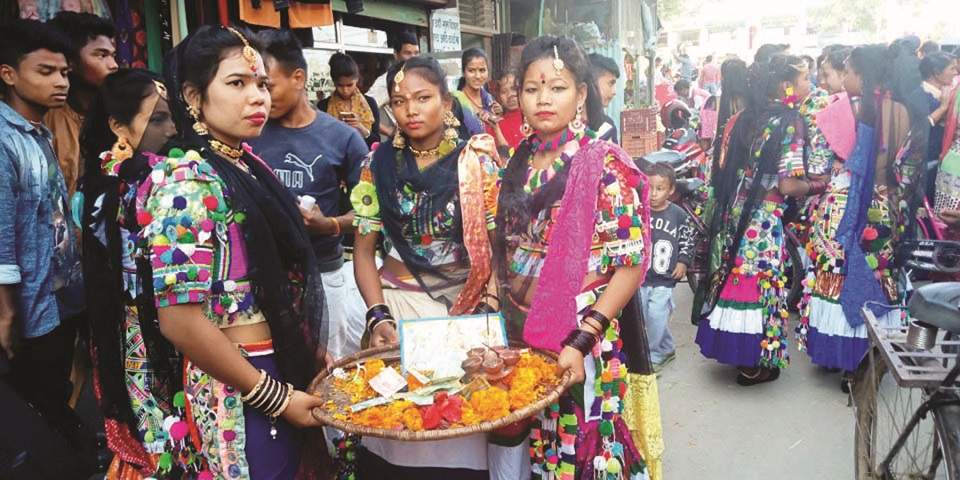 Major festivals across cultures have their roots in rural life. They also share similar rationale for celebration. The reunion of family members, sharing of good time, food, blessings, and worship of gods/goddesses are their universal themes. Unsurprisingly, they are embraced, modified, and commoditized by the urbanites, exurbanites and suburbanites in no time.

The indigenous (farmer) Newari communities around the Kathmandu Valley celebrate Gathamuga, which involves burning of putla (effigies) of the spirits (invoked to aid in bringing a good monsoon and crops) upon placating them with the offerings of money, flower and food.

And Gaijatra (festival of cow) is celebrated ‘to commemorate the death of loved ones with dancing, singing, mirth and laughter’. The residents/onlookers line up at front yards and feed the passing revelers dressed in costumes impersonating cows during the celebrations.

Halloween (celebrated on October 31) and Thanksgiving Day (celebrated on the last Thursday of November) seem to share various aspects of Gaijatra, Deepawali (festival of lights) and Gathamuga. The Halloween is marked by decorated windows with spooky spiders, mummified doors, porches, lawns, and pumpkins carved into black cats. The objective is to ward off the evil spirits.

There are striking similarities between Gathamuga and Halloween. Halloween tradition has its roots in leaving sweets/chocolates at the door as offerings to goblins, ghosts, imps, gnomes, and changelings to placate them so as to avoid incurring their mischief and wrath.

Children get dressed in fear-inducing and weird-looking costumes and knock the doors in the neighborhood saying ‘trick-or-treat’ (teat mostly comprises crafty chocolates). This tradition is identical to the donations sought during Deepawali’s deusi/bhailo (group singing and dancing for fun) through invocation of Baliraja (demon King Mahabali).

The children allude to trickery/misfortune if they are not offered good treats during Halloween.  Similarly, the deusi/bhailo groups chant damning curses if they are not offered any donations: anna chhunda mato bhaijawos (transliteration: May the crops turn into earth upon contact) or blessings could be encouraging: mato chhunda suna bhaijawos (transliteration: May the earth turn into gold upon contact). A curse incurred during a cultural festival can have a devastating effect on a family’s psyche and is thus avoidable. Dhan Nach (paddy rice dance) festival is celebrated by the indigenous Kirata tribe of the eastern hills of Nepal upon successful completion of harvesting season.  It’s a celebration of nature’s bountiful generosity, and embodiment of Annapurna, the Hindu goddess of food.

Drawing parallels
Thanksgiving Day in America echoes Dhan Nach values albeit in a slightly different context. The European settlers had arrived in the New World (America) in winter and they had no food to eat and no resources to trade. Still, the Native Americans shared food with the starving settlers. Henceforth, the settlers expressed their gratitude to the Native Americans and celebrated the former’s generosity by naming it Thanksgiving Day.

Indigenous traditions and festivals keep us tied to our roots and nature. Our very existence and identity get threatened when long held traditions/festivals are circumvented and obscured. A lack of cultural purity further intensifies strife between man and nature.

We are already on a collision course with the Mother Nature due to our insatiable greed for material possession and unjustifiable craving for unnatural (processed) food, which, in turn, have sent the natural order off-balance and triggered unprecedented natural calamities such as floods, landslips, hurricanes and typhoons.

Thanksgiving Day and Black Friday (observed the day after Thanksgiving Day) have now been publicly mischaracterized as the heydays of capitalism/materialism since many inessential and soon-to-be-dumped non-food consumer products are sold in heavy discounts to the consumers (particularly in  America).

Deusi and bhailo traditions have also been used as pretexts to extracting money/donation (from businesses, families, and individuals) which gets spent mostly on outings and cocktail parties. It  provides venues for romantic encounters among the young participants resulting into more businesses for abortion clinics.

Lust has always proved to be beneficial to shady abortion businesses even as organic love and romance traditions fade under any political systems, most of which are flawed, and some are more flawed than others, to borrow the Orwellian parlance.

On a positive note, Thanksgiving Day and Black Friday offer golden opportunities to the people¬¬¬ left behind in the economy to make purchase of some products stacked on their wish list as the prices are heavily marked down. Likewise, many local mothers’ groups and community organizations in Nepal are reported to organize deusi/bhailo program to raise resources to put to good causes.

Light is God. Darkness is Devil. Light is Life and Truth. Darkness is Death. Communities across cultures celebrate festivals of light in one way or the other because they loathe darkness. Light is central to celebration of Halloween, Thanksgiving, Christmas, Dashain, Deepawali and Chhath Pooja. Illumination of houses, streets, riverbanks, ponds and public places brings about true joy among the revelers.

The hanging of festoons woven with multiple flowers, leaves of bar/pipal and mango (considered auspicious to be used during ritual Hindu worship) across the trails, over the roofs of houses, and animal shades is a unique tradition. The worship of the rising and setting sun (read the Sun God) along the ponds and riverbanks during the Chhath Pooja is a spectacle toward achieving rationality, peace and prosperity.

The illumination of the entire house, dhiki/janto (domestic tools made of wood, stone and mud for separating chaff/husk from paddy rice, quinoa, millet, barley, wheat, maize etc and grinding them to flour) and the whole surroundings with makeshift oil lamps made of chopped banana supla (stems) and/or earthen prayer lamps during Deepawali are as magical as the embellished and illuminated Christmas trees during Christmas.

Deepawali is one of the most organic and musical festivals. It is synonymous with lights, flowers, fruits and festoons. It helps develop young people’s leadership capabilities as they wrestle to lead the chorus, sing, and dance. The most reticent boys become the most effective chorus leaders and the shyest girls become the coveted dancers in front of the enraptured audience.

Yours truly always underwent overpowering nervousness while participating in deusi chorus. A self destructive consciousness prevented me from immersing in the group-activities. My tragic illusion of being watched by the whole world betrayed me although few may have noticed me. Self and cosmic awareness are constructive forces while self-consciousness is oftentimes a recipe for failure as it saps one’s energy from outside and within.

The rainbow colored tika on the forehead of sisters and brothers, dhaka topi (traditional Nepali headgear made of fine cotton) and gunyu choli (lower and upper part of traditional women’s dress) and the garlands of sayapatri (marigold), amaranth (makhamali), and gurdauli (chrysanthemum) flowers all add to the splendor of Deepawali/Tihar.

Save the earth
A submission to nature facilitates telepathy between mankind and the cosmic force. The spirituality practiced in tandem with nature brings about solace in life. Thus, an indiscreet exploitation of nature is a step toward annihilation. However, we can make course correction to absolve ourselves of all the sins we have committed so far by singing and praying toward the wellbeing of the earth that we share with the rest of creatures that inhabit it.

Apes live in groups in forests and protect each other, their territory, and their packs from any external enemies and attacks but ‘apes in us’ live amongst each other and always conspire against each other to stand out from the packs. Our festivals encourage us to adopt the ‘good apes’ values and spirits to protect our dear territory (the earth).

It’s high time we gave up insanity and arrogance to preserve the irreplaceable earth to ensuring   peaceful coexistence. Otherwise, the grown-ups in the room will have no better choice than remain speechless and nonplussed while Greta Thunberg (Swedish climate activist) thunders representing millions of earth loving teens’ voice at the United Nations Climate Summit: ‘How dare you?’

Let there be light

As the country goes for yet another three-day holiday for Tihar, there are many issues making the rounds in the... Read More...

TOKYO, May 12: Marking the Golden week, the popular festival of the Japanese, Surya Corporation has organized a cultural program. Read More...

Bagmati Province spent only 15.78 percent of the allocated budget in the first half of current FY
27 minutes ago