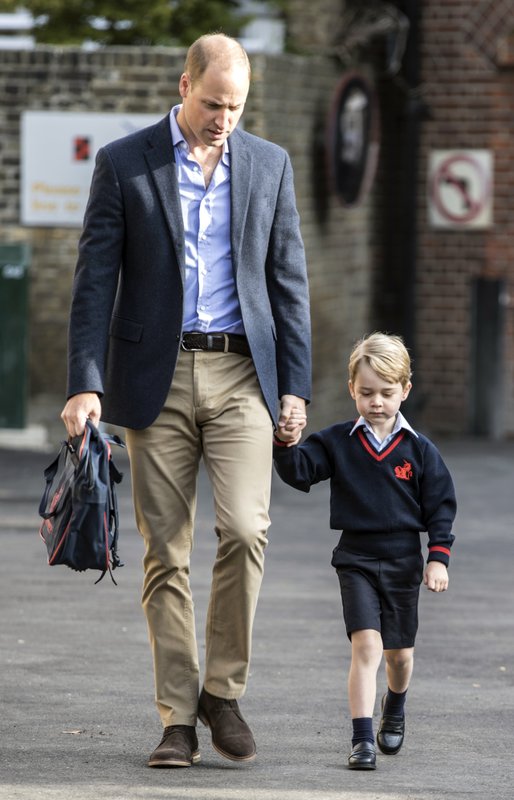 LONDON, September 7: Prince George went to school for the first time Thursday, but it was a rite of passage missed by his mother, who is struggling with acute morning sickness in the early stages of her third pregnancy.

The 4-year-old George was accompanied by his father Prince William, on his first day at Thomas’s Battersea. The two future kings walked to the school entrance hand-in-hand before George was greeted by senior teacher Helen Haslem, who introduced him to the other children.

George’s mother Kate, formally known as the Duchess of Cambridge, was home at Kensington Palace. She is once again stricken with hyperemesis gravidarum, severe nausea and dehydration that affected her first two pregnancies. Kensington Palace said in a statement she was not well enough to take George to school.

At an event Tuesday, William said Kate is fine but acknowledged some strain: “There’s not much sleep going on at the moment.”

George, wearing his school uniform for the first time, seemed a bit more timid than usual as he approached the school gates.

He is to be known as George Cambridge to his classmates at the exclusive school in south London.

The school charges more than 17,500 pounds ($22,870) per year and draws a cosmopolitan group of students from throughout the London area. His class will have a wide range of activities including ballet, art, drama, music and French.

George’s parents have said they want him to have as normal a childhood as possible, and palace officials tried to discourage news organizations from sending photographers to the school Thursday, instead offering pool photos of George’s arrival.

The young prince is third in line to the British throne. He would follow his father, William, and grandfather Prince Charles.

LONDON, Oct 19: Britain’s Prince William and his wife Kate confirmed on Tuesday that their third child will be born next... Read More...