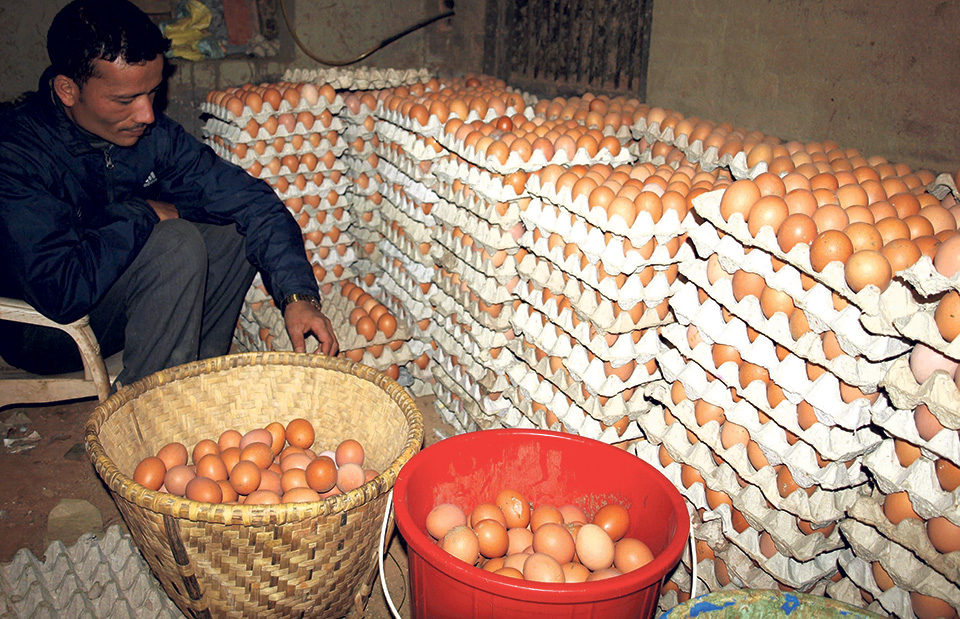 BANEPA, August 27: Poultry farmers in Kavre have been facing shortage of layers chicks.
Bachhuram Thapa of Setidevi Poultry Farm at Panauti-5 has been waiting for arrival of layers chicks for four months now. During this time last year, Thapa had bought 2,500 layers chicks paying Rs 45 per head. But hatcheries have not been able to provide chicks to farmers like Thapa since April.

The shortage of layers chicks has also affected Women’s Agriculture Cooperatives, which has received grant of Rs 500,500 from District Livestock Service Office (DLSO) had provided Rs 500,500 to Women’s Agriculture Cooperative Organization in the last fiscal year to expand poultry farming. Though the cooperative had booked 1,000 layers chicks in June, it is yet to take delivery of chicks.

“I had H&N layers in my farm last year. As I was satisfied with the breed, I wanted to continue rearing the same breed this year too. But I am yet to take delivery of layers chicks even though it has already been five months since I placed order at NN Hatchery,” Thapa said.

Not only Thapa. Other farmers of Panitanki area, who were doing pretty good in poultry farming, are now mulling over shifting to other profession.  Some have already opened eateries and shops along the BP Highway.

Panitanki, Malpi, Sunthan, Panauti, Khopasi, Banepa, Rabi Opi and Nala are pocket areas of layers farming in Kavre district. Buoyed by egg production figures of this area, the DLSO was preparing to announce the district self-reliant in eggs.

The price of day-old chicks hovers between Rs 140 and Rs 165. But farmers, who are willing to pay the price quoted by hatcheries, are not getting delivery in time.

Dayaram Mahat, secretary of Nepal Poultry Farmers’ Forum, said that hatcheries imported 63,820 layers parents in FY 2016/17 which is 13,000 more than the previous fiscal year. “As chicken imported in the second week of January are already laying eggs, why are farmers not getting chicks?” Mahat wondered.

According to the government statistics, there are 182 hatcheries in Nepal. But the number of hatcheries that produce layers chicks is limited. Also as most of them are based in Chitwan, farmers in other parts of the country always find it difficult to get the chicks.

Chitwan-based Avinash Hatchery Pvt Ltd is the biggest producer of Hyline layers chicks. “As long as chicks are available in Avinash Hatchery, farmers do not want to buy from other hatcheries. But the hatchery makes farmers wait for a long time,” Mahat told Republica.

Mahat claimed that hatcheries that produce both poultry feed and chicken want farmers to buy both products for them. This has also called the delay, he added.

“The price of chicks, which was Rs 45 per head last year, has increased four times this year. Also, the delivery time, which is usually one month, has been extended by a month. It has affected farmers,” Mahat added.

With only a few layers parents in farm, local traders have started to import eggs from other districts. “Consumers prefer local products as they are fresh. But as production is low, they have no option but to import from other places,” Padhun Thapa, a distributor of eggs, said.
According to the Ministry of Livestock Development, a total of 12 billion eggs were produced in the country in FY 2015/16.

Chick price soars to the dismay of poultry farmers

GORKHA, Sept 13: Acute shortage of fertilizers during the peak season of farming has put farmers in Gorkha district in dilemma.... Read More...