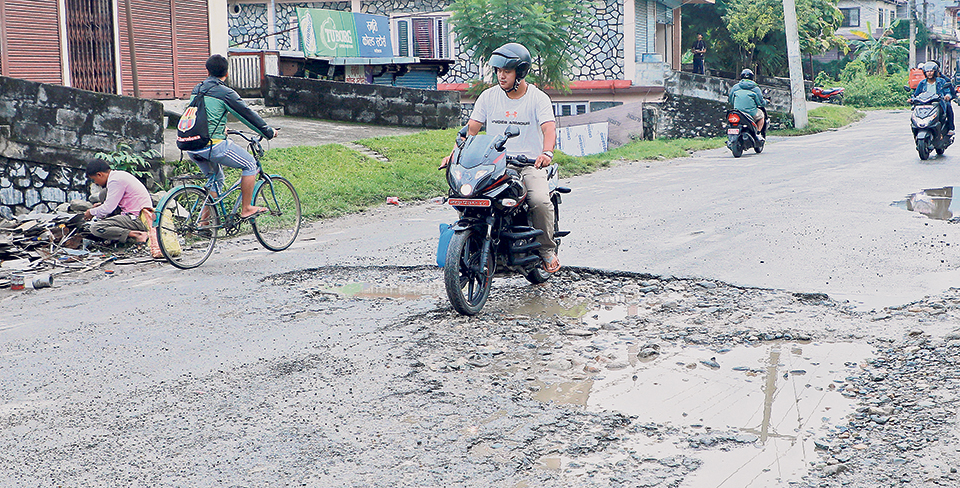 Vehicles pass through a potholes-ridden road in Pokhara in this recent picture. Photo: Umesh Pun/Republica

POKHARA, Sept 19: A local businessman in Pokhara, Om Prakash Pandey was returning home on Monday when he got stuck at Birauta roadside for hours. His car could not move ahead due the pool of water all over the road. After getting stranded there from early afternoon to late evening, he somehow managed to drive further. But there were too many potholes that made his drive too challenging.

“My car got stuck repeatedly in those potholes. A journey of just an hour took me nearly a day,” he lamented.

During the rains, most the roads and corridors in Pokhara pose safety threats to commuters, drivers and riders. This has affected tourists’ and residents’ mobility in this tourist destination, claim hoteliers and other stakeholders.

“We all feel proud of Pokhara for being a tourist city. But we haven’t given even minimum comfort to the people who visit here. I feel so sorry for our poor roads,” remarked Pandey. “On Monday, it took so many hours for me to reach my destination. If I were a tourist with busy schedules, what would I have done?” he questioned.

Pokhara city is also known for regular rain. All season rainfall is actually considered the beauty of the city. However, dilapidated roads have forced people to wish less for rains. No sooner it rains, the city’s roads turn to muddy grounds, greatly troubling locals and visitors.

According to a traffic police, Sub-Inspector Jit Jung Karki, accidents in Pokhara roads are getting quite common. Two-wheelers are even more prone to accidents.

“Recently, a scooter rider lost her life to an accident. She was a young girl. Her scooter got stuck in a pothole and she was left severely injured. She died while undergoing treatment at the hospital,” he said. The deceased was returning home from the lakeside and could not see a pothole on the way, according to Karki.

Almost all roads in Pokhara are in the need of repairs. Those at Prithivichowk, Indrachowk, Sabhagriha, Nayagaun, Birauta, Harichowk and Ranipauwa are considered among the most dangerous potholes. If those roads are not repaired urgently, more accidents are sure and certain, Karki stated.

When the potholes are filled with water, drivers get confused. Not knowing how deep the holes are, they are likely to move ahead, most of the times getting trapped in. “The recent accident of the girl was of similar nature. If attention is not given to the roads, more of such accidents are likely,” Karki warned.

According to Karki, the district traffic police office had notified the road department and the metropolis about the scenario much earlier. But the matter couldn’t draw due attention from the parties.

“They dig the road and make holes for one or other purpose. And then they leave it uncovered. That’s a huge problem,” said Karki. “When roads are poor, traffic management also becomes challenging for us. We have to do everything manually, people get angry with us, without understanding the situation,” said Karki.

“We wrote letter to the road department and the metropolis office, requesting them to cover those potholes urgently. But there has been no response,” he reported.

Kedar Nath Sharma, former president of Pokhara Tourist Council (PTC) noted that the city has become a death trap and that to call it a tourist city, is a matter of shame.

“Let alone sub roads, even the main roads are ready to kill you. Accidents have become so much regular,” he fumed. “We call it a tourist city, but look at the safety measures on our roads,” he added.

Acting Administrative Officer of Pokhara Metropolis, Gangalal Subedi however defended that the roads couldn’t be repaired due to incessant rains. “The roads will be plastered before the festival of Dashain,” he said.

The metropolis is responsible for the maintaining roads except in the highways. Subedi stressed that the road department should take the matter seriously too, and the metropolis has been approaching the concerned office for the same.

Soft-launch of VNY 2020 from Pokhara

KATHMANDU, April 8: The government is set to make a soft-launch of its 'Visit Nepal Year 2020' campaign from Pokhara,... Read More...