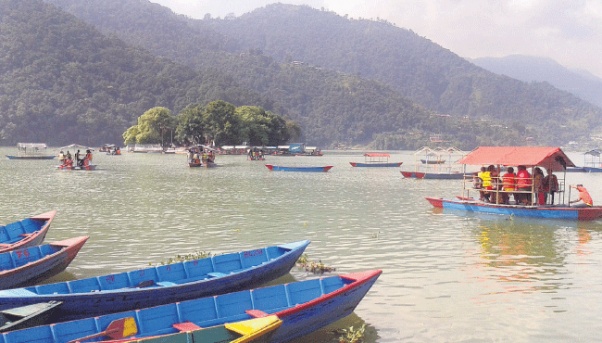 POKHARA, July 4: Tourism entrepreneurs of Pokhara have set a target of increasing the share of Indian arrivals in total tourist arrivals to the lake city to 50 percent over the next five years.

At present, the share of Indian tourists in total tourist arrivals in Pokhara is around 20 percent. The share of such arrivals during June-August is 50 percent, according to tourism entrepreneurs.

The months of June, July and August are considered peak season for Indian tourists in Pokhara.

"Though flow of Indian tourists is satisfactory at the moment, the arrival figure is not consistent throughout the year. We will organize different tourism promotional programs to attract Indian tourists throughout the year," Bharat Raj Parajuli, central committee member of Hotel Association Nepal (HAN), told Republica. "Indian tourists make for 20 percent of total tourist arrivals in Pokhara. All stakeholders will benefit if their contribution is increased to 50 percent of total arrivals in next five years."

He also said that the association has been organizing promotional activities like 'Chaliye Pokhara' (Visit Pokhara) in several Indian cities to increase number of tourists from the southern neighbor.

"Nepal and India have many things in common. Despite this, the arrivals from India are still below our expectations because of infrastructure constraints and political instability in Nepal," Parajauli said, and added: "The arrivals from India were growing steadily. But it slowed down after the 2015 earthquakes and the subsequent blockade. It is picking up slowly now."

He added that not only Pokhara but the entire country will benefit if the number of tourists increases in Pokhara.

Hari Sharma Gaire, former president of Paschimanchal Hotel Association Pokhara, agreed with Parajuli. "We have seen some improvements in arrival figures in recent years. But the number of budget travelers is high. Our focus should be on bringing high-end tourists," Gaire said. "We need tourists who can afford standard services."

Gaire says Pokhara has failed to attract tourists as expected despite having immense tourism potentials. "We still lack infrastructure like casinos for high-spending tourists. Our streets wear deserted look before midnight. We need to keep our markets and streets open round the clock if we are to bring quality tourists," he said, adding that there was a need to increase nighttime activities for tourists in the lake city.

Bikal Tulachan, chairperson of Paschimanchal Hotel Association Pokhara, said 'Chaliye Pokhara' campaign has become successful to increase tourist footfalls. "But most of them are budget travelers. Now, we are eyeing high-end tourists," Tulachan said, adding: "Our focus is also on getting tourists round the year not just on peak seasons."