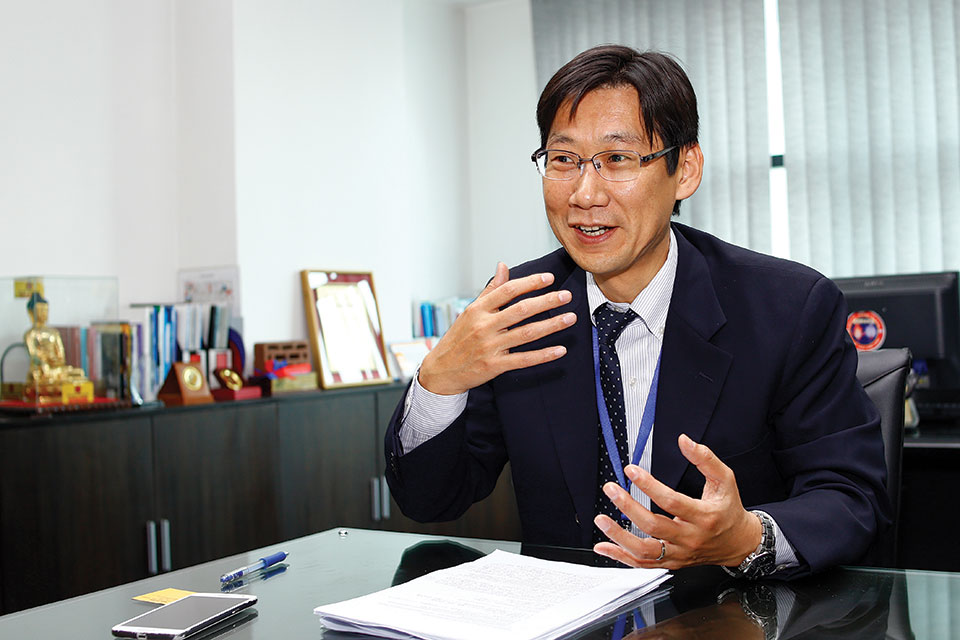 Japan International Cooperation Agency (JICA) has been engaged in Nepal as a development partner of Nepal since 1969. The support, which mainly includes grant assistance, concessional loan and technical cooperation, has been on wide range of sectors with twin aim of helping Nepal achieve socio-economic development and promoting friendship between the two countries. JICA has also been on the forefront in helping Nepal for reconstruction after the 2015 earthquakes.

As the country commemorates third anniversary of the devastating earthquakes, JICA’s Chief Representative for Nepal, Jun Sakuma, talked to Sagar Ghimire of Republica on various issues like progress and problems of reconstruction as well as other areas of engagements. Excerpts:

How is JICA working in Nepal? What are its major projects?

The first is infrastructure development. Under this, we are supporting projects like Melamchi Drinking Water Project, Pokhara Water Treatment Plant, Tanakpur Hydropower Plant and Nagdhunga Tunnel Construction Project, among others. The second one is the reconstruction from the earthquakes in 2015. The third pillar is social development in order to narrow down gap between rural and urban areas. Under this, we are providing support on agricultural, education and health, among other sectors. The last pillar is the support for good governance and federalization. For example, we have supported in the enactment of the civil code which helps in institutionalization of community mediation. The support under this pillar also includes establishing local development training academy (LDTA) which trains local government staffers.

We have eight grant projects and the amount for these projects total 12 billion Japanese Yen. We have provided concessional loan of 63.2 billion Japanese Yen to five projects. Our interest rate is 0.01 percent which is very low. We are also providing technical cooperation projects, which development partners generally say technical assistance. But, we call it technical cooperation. Cooperation means equal partner because we work together.

JICA is working in Nepal since 1969. What do you think are the achievements over the past four and half decades?

JICA has two main purposes in Nepal. One is to contribute to socio-economic development of this country. Another one is to promote the good relationship between Nepal and Japan. JICA has contributed on these both fronts to some extent. Regarding the socio-economic development of this country, we have supported the construction of BP Highway, Kathmandu-Bhaktapur Road, Kulekhani and Kaligandaki hydropower plants, Tribhuvan University Teaching Hospital, equipment supports like radar in Tribhuvan International Airport, water treatment plants in Kathmandu Valley as well as support for agricultural development. We have been covering very wide range of sectors.

We have also provided training opportunities for government officials. More than 5,500 government staffers have received JICA’s training in Japan. More than 2,500 Japanese experts have worked in this country. Those face-to-face cooperation and exchange programs have contributed to promote good relationship between the two countries.

Unfortunately, the pace of reconstruction of schools is very slow. We had planned to reconstruct 237 schools. But among them, reconstruction of only one school has been completed so far. We are reconstructing those schools in three phases. The first phase started from June 2016, but the progress was only 40 percent. We terminated one contract due to the delay in reconstruction.  Of course, we are doing many things to expedite the process. But, the contractor management has been very big issue. This is not only the case in reconstruction, but also for other projects. Regarding the construction of public facilities, the progress is not so bad. We are providing support for reconstruction of Bir Hospital, Paropakar Maternity Hospital in Thapathali, water pipeline system in Chautara, bridges and trunk road in Barpak-Larpak Road. We plan to finish everything by March next year.

For the restoration of cultural heritage, we are dispatching two JICA experts for reconstruction of the palace complexes in Kathmandu and Patan. And under DRRM, we have already supported the government to produce various materials such as hazard map in Sindhupalchowk, resilience plan of Kathmandu and DRRM plans for municipalities.

The results you showed might be remarkable if compared to overall progress. But that completion rate of 40 percent in three years is still a slow performance. What do you say?

One of the major reasons is the instability of the government. Now, this has been addressed. One of the examples is the establishment of National Reconstruction Authority (NRA) which took nearly a half year. So, the reconstruction work was delayed from the beginning. After that, the government shifted staffers from other agencies. But many staffs were reluctant to go work in the NRA. So, there was a shortage of manpower. These issues affected the reconstruction progress.

The progress, in general, is slow. However, in my observation, the NRA people are working very hard to achieve the mission. The shortage of manpower, especially at the grassroots level, was serious from the very beginning. However, things have improved now. I am hopeful that reconstruction process will expedite in the future. Reconstruction process takes time. We had a big earthquake in Japan in 2011. It has already been more than seven years since the earthquake but we are struggling with reconstruction.

JICA is also helping Nepal to build the Nagdhunga tunnel road. Could you please elaborate more on it?

We have just finished detailed design of the tunnel road project. We are now preparing for the bidding process. We think we can go to bidding in this year and we can start the construction early next year. So far, there is no delay in this process. We expect that we can complete the construction by August 2022. If we can smoothly finish the bidding process, we can finish the construction without any big delay. This is the first traffic tunnel in this country. The Department of Roads has started communication with local communities for land acquisition. Though negotiation has yet to start, the government will look after this issue.

JICA is also supporting the first economic census of the country that started last week. Please tell us about your technical cooperation in this project.

Economic census is very important to understand the business and economic activities of any country, and help to make various plans like industrial policy. The major purpose of this project is to develop the capacity of the Central Bureau of Statistics. We hope that CBS can manage this kind of census in the future. We have also provided some equipment like tablets and laptops. The support was also to carry out e-Census. JICA has similar activities not only in Nepal, but in some other countries also.

Moving forward, what are your plans and strategies to help in promoting bilateral ties and socio-economic development of Nepal in the coming years?

As the chief representative of JICA here, I want to increase the cooperation in the future. As I mentioned earlier, we are providing our support on four pillars. Regarding infrastructure developments, we are interested in some projects. For example, we are examining the possibility of expanding the road of Suryabinayak to Dhulikhel.  From Dhulikhel to Bardibas, there is BP Highway. But the Suryabinayak to Dhulikhel section needs expansion and we are examining the possibility to support on construction of that part.

Last year, we had completed traffic master-plan study in Kathmandu. Based on this result, we are also interested in construction of fly-over from Baneshwar to Tripureshwar and Maitighar as well as new public transport system which we call automated guided transport.  If the government is interested, we will provide our support. Of course, support for promoting federalism is our priority. Still, we are not sure what kind of support we can do in promoting federalism. As the reconstruction is now shifting to disaster risk reduction management, we will shift our cooperation area. After the reconstruction, we will focus on DRRM because we believe that preparedness should be strengthened as we don’t know when disaster will happen.

Japan International Cooperation Agency (JICA) has been engaged in Nepal as a development partner of Nepal since 1969. The support,... Read More...