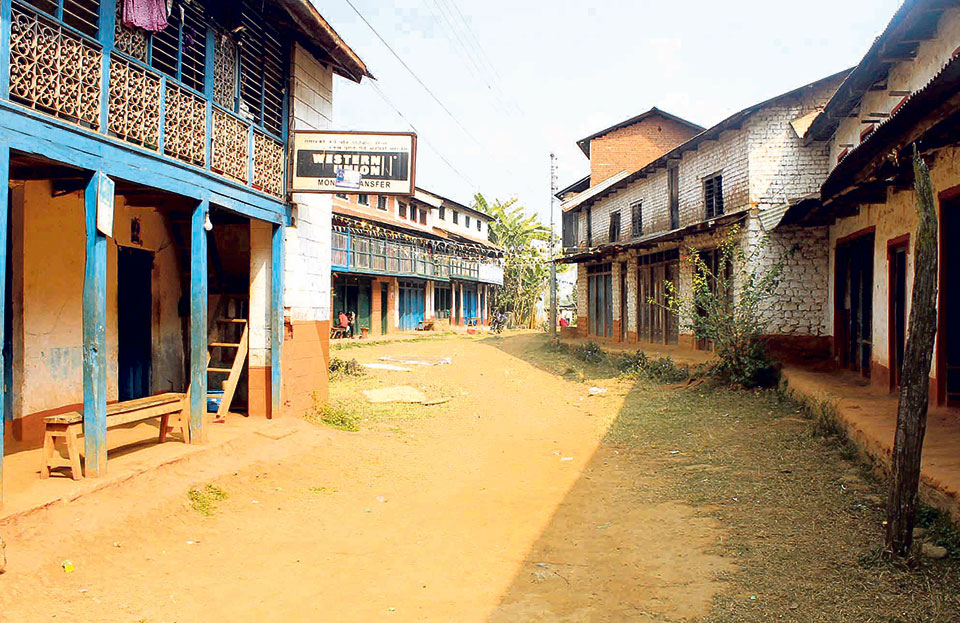 Kamalebazar in Baglung district used to be a much happening market place two decades back but now wears a deserted look. Photo: Chabilal Tiwari/Republica

PARBAT, May 2: Kamalebazar of Falebas, Baglung, would ‘remain awake’ the whole night until before two decades. It would offer lodge, hotels to travellers. People from Baglung and Pabat districts would touch down here en route to different destinations.

Along with that, locals of several villages would stop by for shopping. Similarly, Bhorle, Malaaj, Kurgha, Pangrang of Parbat used to be the most happening places. In Baglung, markets at Rangkhani, Rohote, Chhisti, Baskot, Kushmisera, Tunibot and Jaidi used to attract crowds. Now, those market areas are empty. Their shutters are closed, and their walls are collecting moss. It feels that people have forgotten to come here. Their downfall is blamed on the increased road connectivity between towns and villages.

“Old market places have almost disappeared. Now you see only deserted houses along the roadsides. Their doors are closed and there are no activities around,” said a local of Falebas, Nareshwor Paudel. “There is not even a single shop at the old market here in Falebas. Kamalebazar is also no more alive,” he added.

According to Paudel, businesses thrived in those areas from 1974 to 1998. In the two decades, many people who invested in business here earned a lot.

“Kamalebazar has turned the fate of many people. Those who worked hard here or did business back then turned millionaire,” Paudel said.

Over one and half dozen businessmen from Kamalebazar including Kamal Bhushal, Rudra Bhushal, Balkrishna Tiwari, Tikaram Gaudel, Nandalal Tiwari and Nareshwor Paudel, who were very popular then are no more running a business here. Most of them have shifted their business elsewhere.

“Earlier there were no vehicles or roads and mules were used to transport goods. Only top businesspeople could make arrangements for hiring mules. It would take days for people to reach from one to the other destination. They needed to stay at hotels. Thus such old market places did brisk business then,” elaborated Paudel. “Now, goods reach people’s doorstep in most of the towns and villages. People do not need any hotel to stay at night as they travel by bus instead of walking for days.”

Paudel stated that many businesspeople even changed their profession. ‘As there were no more bright prospects of business in the markets, some traders even gave up their trade entirely and started doing something else.’

In those days, the price of lands in the area was very high.  Many who wanted to buy a plot in these markets then reportedly had to abandon the plan after hearing the price.

“At that time the land here used to be considered very precious. I and some of my friends wanted to settle down here and looked for suitable plots to build our home. But we didn’t get a plot here even after showing a willingness to pay a good price at the time,” reminisces Balkrishna Tiwari, who used to do business at Kamalebazar then.

Tiwari used to own a fancy store and a photo studio at the market. Nowadays he is doing business at the district headquarters. “I did business in Kamalebazar for 22 years. I earned well.” As the markets started to decline, some of the businessmen abandoned business and started farming.  Some of them are now doing vegetable farming in Baglung and Parbat districts.

According to Khil Prasad Bhushal of Mudikuwa, he did business at Modibeni for two decades and then returned to his own village.

Another businessman Devi Prasad Adhikari, who used to run hotel in Modibeni also quit. “I used to do a transaction of around Rs 100,000 per day. But when it was no more working there, I had to quit,” he said.

Eknarayan Adhikari of Kushma used to provide food for hundreds of porters then. He had a small hotel at Seulibazar. “Later porters lost their job to motor, cars. They were no more relevant in the new context. I also lost my business,” said Adhikari. “When I remember the times of those days, it feels like a dream.”

The businesses had slowed down after Pokhara – Baglung road track was opened in 1991. Later more road tracks were opened. During the last decade, road construction was intensified further. Over 80 percent of small routes for walking have now disappeared according to Gopi Adhikari, vice chairperson of Parbat branch of Chamber of Commerce.

“If no option is sought Kushma Bazar will be totally dead. It is important to keep it going,” he said. “The loss of the old markets is not good news. We could have roads and yet have those markets too by promoting tourism in those areas,” he added.

While the old markets are fading, new ones are however emerging. Patichaur and Dimuwa areas are already doing great businesses. Similarly, Balakot, Hatemalochowk , Lamakhet and Khanigaun are among the new popular markets in the region.

BAGLUNG, Nov 28: Hospitality industry of Baglung is attracting new investments buoyed by the increment in number of visitors. The district... Read More...

KATHMANDU, Dec 14: The rise in number of invalid votes has piled up pressure on the Election Commission (EC) to overhaul... Read More...

BAGLUNG, Feb 18: Some 14 political parties active in the district have registered their parties in the District Election Office. Read More...