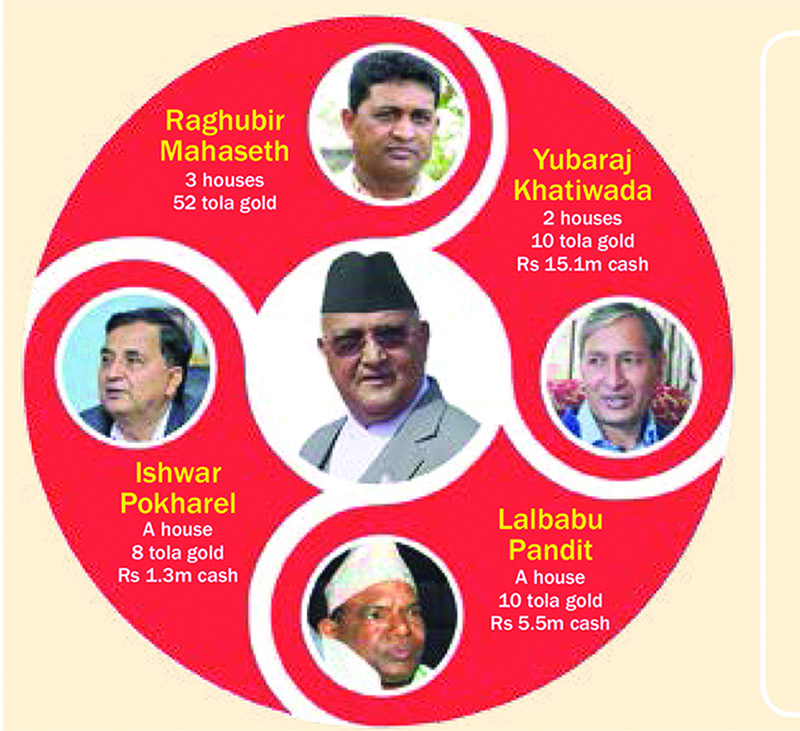 As long as we fail to understand true spirit of income and asset declaration, leaders who are expected to set examples will continue to mock the system

When the cabinet ministers declared their property holdings at the end of May, mandatorily required by the law, it became a spicy masala for Nepali media. It is natural for the media to make satirical coverage when the ministers declared mundane stuffs like dogs, old bicycle, scooty, iphone, TVs, laptops and zero bank balances as their personal holdings. Going by the list of declared properties, the media also did not fail to joke that we have dirt-poor communist ministers having filthy rich spouses.

The lack of seriousness in property declarations has become a norm since the system was instituted in 2002. Once Nepal Army bluffed the system by directing its officers to pay Rs 5000 as penalty for non-compliance instead of forcing officers to declare properties.

Politicized from the start

The system was institutionalized when Judicial Inquiry Commission on Property, called Lamsal Aayog, collected property details of more than 30,000 public officials post-People’s Movement 1990. Later, Commission for the Investigation of Abuse of Authority (CIAA) extensively used these submitted property details as raw materials for its high profile anticorruption actions against illicit enrichment. One can fairly imagine why public officials, holding post, before 1990, were excused from the purview of Lamsal Aayog. That was the period of political regression in Nepal.

Going by the list, one can figure out either our cabinet ministers are completely ignorant about the true spirit of property declarations or they are intentionally making jokes of the system. Anyway, Oli government has specialized in nothing other than making people laugh. Obviously, it will be a matter of joke when actions do not match words. In this case the agenda of good governance and corruption control (words) do not match with the way properties of the officials got declared (action).

There are two purposes for installing wealth and income declaration systems. These are to resolve conflict of interest and/or controlling corruption. The full spectrum of the law governing wealth and income disclosures normally covers issues like officials and their assets and income to be covered, frequency of declarations, public disclosure of the information, monitoring and enforcement mechanism and sanctions for non-compliance.

Unlike cabinet ministers, in the case of civil servants, as a compromise between individual’s rights to security of personal property and public demands for transparency and access to information, the declared property statements have to remain confidential. The confidentiality of property declarations has triggered two rumors. One, there is a temptation to declare more property than what is actually owned. This is to provide an insurance against possible future illicit accumulations. Second, which is far closer to truth than the first one, is to have the declared statement forms filled with notes saying, “no changes” or “as in the previous declarations”. Personal discussion with the colleagues working in the government informed this scribe of the second one in vogue than over declaration of property statements.

Probably the four researchers, namely, Simeon Djankov, Rafael La Porta, Florencio Lopez-de-Silanes, did an exhaustive study on global practices on property disclosure by politicians and Andrei Shleifer and the results were published in 2010. They found the system to be prevalent in 175 countries. Two-thirds of these countries have some disclosure laws while less than one-third make disclosures available to the public. In practice, less than one-sixth of potentially useful information is publicly available. The researchers found that the countries that are richer, more democratic, and have free press have more disclosure. They also found that public disclosure, against internal disclosure, is positively related to government quality, including lower corruption.

A review of property declaration systems in seven Asian countries (Afghanistan, Pakistan, Tajikistan, Kyrgyzstan, India, Bangladesh and Nepal) done by U4 Anticorruption Resource Centre in 2013 revealed that the systems focus more on the legal framework and pay less attention to how asset declaration rules are being implemented and enforced. In the case of the selected countries, there is very little publicly available information on implementation and results. Similarly, the Transparency International’s study on property declarations in seven Middle East and North African (MENA) countries, found wide discrepancy between law and practice including significant shortfall in declaration standards. Poor implementation seems to be the norm in many developing countries.

As long as we fail to understand the true spirit of income and asset declaration, the very leaders who are expected to set examples for the society will mock the system.  Actually, legal provision is also technically flawed. By subjecting all public officials to compulsory declaration and need for regular updating, one is literally exhausting the monitoring and enforcement capacity. If the system had been applied only to specific categories of officials where the risks of corruption and conflict of interests are high then it would have been more sensible from the point of monitoring and enforcement. Similarly, instead of regularly updating, it would be more effective if officials were required to declare their property before assuming and after leaving the office. Instead of making jokes with the system, it is better to quash the system that is unenforceable. If we continue to have the present system, hopefully, someday, it will not be surprising if our ministers start declaring their wives as personal properties.

KATHMANDU, APRIL 18: At 2:41 am on Monday, Home Minister Bimalendra Nidhi posted a tweet, expressing his doubt over the preparedness... Read More...