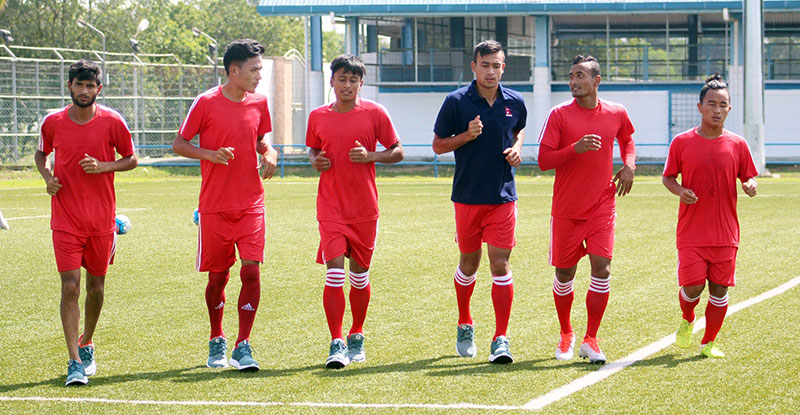 Photo Courtesy: Members of Team Nepal during a training session in Kuching, Malaysia on Sunday. Nepal will take on Brunei Darussalam in its last match on Tuesday. (ANFA)

KATHMANDU, Nov 6: Weaknesses in finishing and lack of proper coordination among midfielders and forwards cost dearly for Team Nepal against Timor Leste as it was forced to settled for a 0-0 on Saturday in the group round match of AFC Solidarity Cup held in Kuching, Malaysia.

Despite controlling the match and coming up with as many as four remarkable attacks on goal, Nepal lacked the cutting edged during its first match played at the Negeri Stadium, Kuching. Nepal hit 11 shots on goal against two of Timor Leste.

Under pressure Timor Leste came into match at the back of a 4-0 defeat against Brunei Darussalam in opener of group A consisting of three teams. The Island team of the South East Asia continuously kept Nepali attack at bay and ignited slim chances of making to the semifinal. Unlike Timor Leste, Nepal’s hope of making into semifinal with a match in hand received huge blow.

“The result is not negative; we have to go ahead with optimism,” Nepal’s head coach Gyotoku Koji said at the post match conference. He also opined that humidity and match played at the natural turf in Kuching after training at home in artificial turf for long had adverse effect on his side.

He also pointed out problems with the strikers and midfielders. “They shoot long distance which is problem for Nepal. I will instruct for improvement in the second match,” he said.

Koji’s counterpart Fabio Da Silva of Timor Leste said that his side would wait for the outcome of next match. “We knew that there will be different game and it would be difficult for us qualify,” he said.

Nepal came up with some brilliant attacks after break and hit the woodwork twice. Nawayug Shrestha’s scorcher in the 47th minute hit the upright and Ananta Tamang’s header off Anjan Bista cross faced similar fate. It crashed on to the bar. Bharat Khawas low ball went wide after dribbling past two defenders and goalie in the 81st minute. Midfielders Bikram Lama and Heman Gurung also wasted chances.

Nepal had defeated the same opponent with the scoreline of 2-1 and 5-0 in 2014 AFC World Cup Qualifying matches held in Kathmandu.

KATHMANDU, Nov 5: Nepal is taking on Timor Leste at the group stage match of the AFC Solidarity Cup at... Read More...