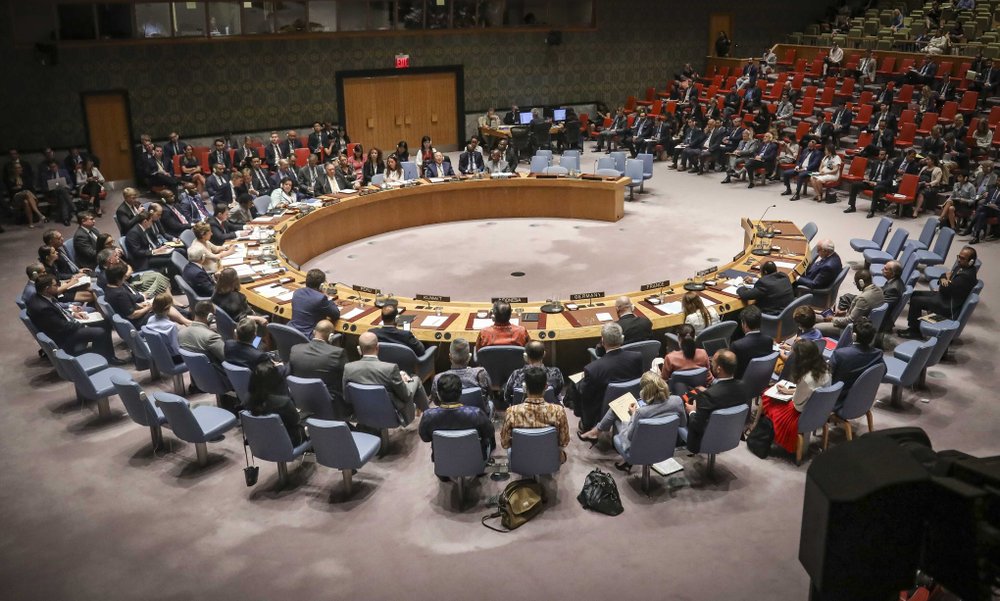 UNITED NATIONS, Aug 21: U.S. Secretary of State Mike Pompeo told the U.N. Security Council on Tuesday that greater cooperation and “fresh thinking to solve old problems” are needed in the Middle East — but he also condemned Iran and its proxies for continuing “to foment terror and unrest” in the region.

America’s top diplomat said “time is running short” to keep a U.N. arms embargo on Iran and a travel ban on the head of the country’s elite Quds Force, Qasem Soleimani, warning that ending such sanctions will “create new turmoil” by the country’s “terror regime.” The embargo and ban expire in October 2020.

“Failing to confront the Iranian regime’s malign activities will only grow the regime’s multi-continental body count spanning the last 40 years,” he warned.

Pompeo was one of more than 30 speakers at a Security Council meeting about the complex challenges confronting the Middle East. He faced sharp criticism from Russia and Iran, and milder criticism over Trump administration policies from several Western allies.

Pompeo began by touting the Trump administration’s accomplishments related to “reviving America’s leadership role” in the region. These included helping to dismantle the Islamic State extremist group’s “physical caliphate” which once spanned large areas in Iraq and Syria, helping the U.N. envoy bring peace to Yemen, and facilitating new links between Israel and its Arab neighbors.

Pompeo then called for more to be done to tackle the challenges facing the Middle East from raging conflict in Libya and continuing violence in Syria to the rift among Gulf countries and Iran, which he described as “the greatest ongoing threat to peace and security in the region.”

He condemned Iran’s support for proxies in Iraq, Lebanon, Syria and Yemen as well as its “inexcusable and unprovoked sabotage and seizure of commercial vessels” in the Persian Gulf and its development and testing of advanced ballistic missiles in defiance of a U.N. resolution.

“Clearly, from Aleppo to Aden, from Tripoli to Tehran, greater cooperation in the Middle East is needed more than ever,” Pompeo said. “We need fresh thinking to solve old problems.”

He said that’s why the U.S. and Poland established the Warsaw Process at a meeting attended by 60 countries in February to promote peace and security in the Middle East. He said seven working groups have been created to focus on the region’s challenges — cybersecurity, human rights, maritime and aviation security, energy security, missile proliferation, counterterrorism, and humanitarian issues and refugees.

Speaking directly to Pompeo, he said the secretary of state’s speech contained many negative words, only made one reference to cooperation — and “not once did you use the word dialogue.”

He said Pompeo also spoke “in an emotionally charged way” about the Persian Gulf, which Russia is also concerned about.

“But you are cobbling together a coalition against Iran, portraying that country as the sole source of problems, a kind of empire of evil, so to speak,” Polyansky said.

As a result of the military build-up in the region, he said, any incident can spark a conflict “with potentially devastating consequences.” And he appealed to all parties to exercise restraint, settle problems politically and diplomatically, and “eschew ultimatums, sanctions and threats.”

Polyansky said the United States can’t expect Iran to sit down for negotiations without preconditions when its calls for talks “are punctuated with direct provocations and demeaning sanctions.”

“I wish to assure you, nonetheless, that even given these difficult circumstances we will continue to seek to persuade both our Iranian and United States colleagues of the fact that it’s important to step away from this dangerous precipice, to begin to engage in a settlement through civilized dialogue which provides for an end to ultimatums, sanctions and to blackmail,” Polyansky said.

Iran’s U.N. Ambassador Majid Takht Ravanchi said one of the main causes of instability and insecurity in the Middle East is the U.S. deployment of over 70,000 troops in the region. Almost all of the 41 military installations in the Mideast in 2018 — up from four in 1990 — are American, he said, and “the unbridled flow of American weaponry into this region has turned it into a powder keg.”

Responding to Pompeo’s call for other nations to join the U.S., Britain and Bahrain in ensuring freedom of navigation in the Gulf, Ravanchi called any interference in the strategic waterway “destabilizing,” ″unacceptable,” and doomed to “fail.”

He reiterated Iran’s call for a regional dialogue of Persian Gulf nations, and Polyansky reiterated Russia’s call for collective security in the Gulf.

Britain’s U.N. Ambassador Karen Pierce said, “This may well ... be an idea whose time is yet to come, not least because the region itself needs to be ready for such work.”

She said one option might be to have a serious and inclusive talk between regional and international actors about the Strait of Hormuz.

Britain, France and Germany all reiterated their support for the 2015 Iran nuclear deal and urged the government to return to the uranium limits in the agreement.

Anne Gueguen, who is France’s deputy U.N. ambassador, said in implicit criticism of the U.S. that there “can’t just be the policy of pressure and sanctions.” She said only a global approach can deal with Iran’s nuclear, ballistic missile, and regional activities.

Andreas Michaelis, a German deputy foreign minister, said these issues and Iran’s threats to maritime security in the Gulf need to be addressed, and the three countries “are right now looking into options of how to foster regional cooperation and maritime security.”

In a message clearly aimed at the Trump administration, he added: “We are convinced that active de-escalation by all sides will yield positive results, and that an even higher pressure and unilateral actions will do the opposite.”

US aircraft carrier deployed over Iran remains outside Gulf

ABOARD THE USS ABRAHAM LINCOLN, June 4: A U.S. aircraft carrier ordered by the White House to rapidly deploy to... Read More...