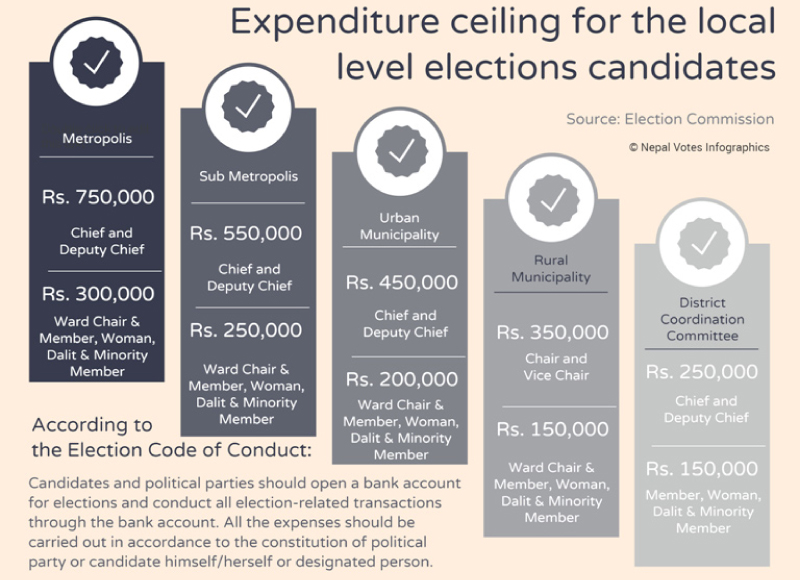 POKHARA, May 9: The Election Commission (EC) has set ceilings on expenditures that candidates competing in local elections at various levels can make. According the directive, mayoral and deputy mayoral candidates of a metropolitan city have been given the maximum budget ceiling of Rs 750,000.

The ceiling that came as part of the Election Code of Conduct has been received with criticism from candidates and commentators. The ceiling, commentators noted, won’t even suffice for organizing door-to-door visits, mass meetings, internal party meetings, let alone printing pamphlets and flags, among other necessities.

“Even if the candidates keep their campaigns very simplistic, their expenditures will exceed far more than the ceiling the Election Commission has fixed,” said Kapil Mani Dahal, professor of political science associated with Prithivi Narayan Campus, Pokhara. “The candidates remain busy in organizing and participating in campaign activities from morning to night along with their supporters. To finance lodging, food, and travel expenses of the whole team costs much more than what the commission has fixed.”

In Dahal’s opinion, contending elections without sufficient funds is really hard for the candidates adding that it is especially hard for candidates who are not affluent. “Even though there are many candidates contending for the same post, it does not decrease the campaign expenditure of a candidate in any way.”

“The candidates who cannot spend in the campaign have very slim chance to win. Money counts a lot during such events. They have to spend to get the attention of the mass,” he remarked. “And if a candidate does not have sufficient funds, he or she might loose just because of that weakness. Such crunch hits independent candidates the most,” he added.

Dahal further noted that luring the voters is not easy. The culture of spending considerably for election is not a new one and it is in fact popular among people. Throwing party to cadres and mass is not taken as ‘extravagant’ expense. In fact, that is taken as obvious. “When this is the case, how can one do with the bracketed amount? It’s tough for those unable to spend,” he stated.

He questioned the EC’s motive behind putting unrealistic expenditure ceilings. “Code of conduct must be realistic for it to be effective. If you consider the inflation, ceilings put forward by the EC do not match to the actual reality,” he said, adding “it should have been realistic.”

Elaborating further, Dahal argued that the social etiquettes demand they offer tea to listener, provide snacks and daily expenditures to campaign volunteers. “Nothing comes for free. With such a high inflation, how can a candidate afford paying for all the things with such meager amount? It takes a lot of cash to fund an election campaign, lot more than what the EC has estimated.”

As candidates depend solely on party cadres or volunteers, tracking all expenditures is very hard to segregate election related and unrelated expenditures. Party cadres and volunteers, who work round the clock for the campaign, have to be paid. “Whether they spend the funds for election or not is something you cannot question during the campaign. It is a matter of trust. Whatever is spent from cadre’s pocket has to be borne by the candidate,” he further elaborated. If the candidates do not ‘happily’ bear the cost of their cadre and volunteer’s travel, snacks and gatherings, who will rally support for them? Dahal questioned. “That’s normal and that has to be willingly borne by candidates.

They cannot raise question if they want to keep their chances of winning,” he stated.
A candidate for ward chief agreed to Dahal, while preferring anonymity citing the Code of Conduct. The candidate said that at least, Rs 3 million is needed to contest election at the ward level, let alone at the municipality or the metropolis level. “Dozens of party cadres work their heart out day and night. The amount that the EC has put as a ceiling does not suffice even to feed them, let alone traveling and other expenses,” he added.

The candidate said organizing motorcycle rally, mass meetings, gatherings are very expensive. “For a successful election campaign you need volunteers and cadres who work towards garnering support for your candidacy. And if you are not making them happy, how can you expect to win?” adding further that campaigning in rural areas is even more expensive.

KATHMANDU, Jan 10: Buoyed by its success in tabling the constitution amendment bill in Parliament on Sunday, the government has geared... Read More...

KATHMANDU, Sept 27: Officials of the commission formed to fix the number and boundaries of local bodies have said that the... Read More...