Local polls by mid May: PM 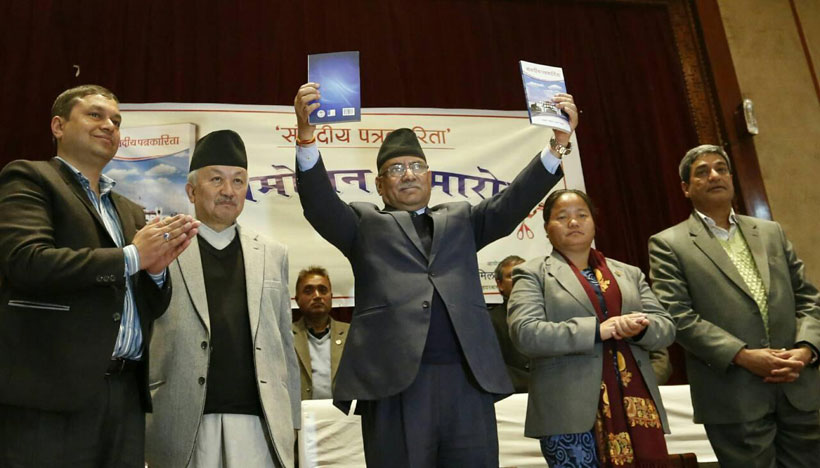 KATHMANDU, Jan 23: Prime Minister Pushpa Kamal Dahal has said that the government will announce the date of local polls within a week and will be conducted by mid-May.

Stating that government has been mulling to bring agitating political parties on board the local election, Dahal further informed that the government will conclude local, provincial and parliamentary election by the end of this year.

“If we fail to conduct the three sets of elections by the end of this year the elected body will lose its authenticity and legitimacy resulting a constitutional vacuum,” he said while launching a book published by Journalists Society for Parliamentary Affairs.

“I will announce the polls date within this week and the polls will be held in the second week of May,” he said. Prime Minister further informed that major political parties have agreed to endorse the election-related bills from the parliament within this week.

Dahal further said that another constitution amendment proposal can be pushed forward paving way for the agitating parties to participate in local polls and the amendment bill which is under discussion in the parliament can be shelved until the next agreement.

“We can register another constitution amendment proposal addressing the issues raised by United Democratic Madhesi Front, which will pave way for their participation in the local polls,” he said. Dahal, however, didn't mention any details of the contents of the amendment bill.

Speaking at the function, Speaker Onsari Gharti drew the attention of the government on delay over announcing the date of polls and urged to announce the date at the earliest.

“The three sets of polls to be conducted within a year will determine the success of the constitution. Political parties will be successful in implement the constitution only if they can agree on holding the elections,” said Gharti.

Former Speaker and deputy parliamentary party leader of CPN-UML Subas Nembang said that he urged the prime minister not to make any delay in announcing the polls date. “As the constitutional deadline to conclude the three sets of elections is fast approaching, elections will be difficult if the government does not declare the local polls at the earliest,” said Nembang.