A still image from the video clip shows police inspector Devi Prasad Poudel hitting with a stock a woman carrying a child. The video clip went viral on the social media Friday.

KATHMANDU, Feb 28: In a viral video on social media, a young woman carrying her child is seen severely beaten by a policeman with stick.

Many social media users including commissioner at the National Human Rights Commission Mohna Ansari have criticized the police for using force on the woman. They have called the police intimidation inhumane.

In the video, a team of police personnel are seen dispersing a group of women from a private house.

It has been revealed that the policeman, who is seen beating the young woman carrying a child, is Devi Prasad Poudel, the Inspector at Metropolitan Police Sector, Bungmati. 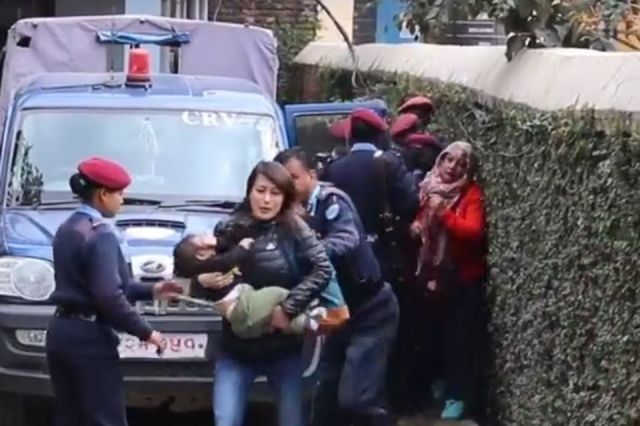 In the video, Paudel is seen pushing Hema Shrestha, a woman activist, who was carrying a minor, from the police vehicle and hitting her with a stick from behind.

According to witnesses, the aforementioned incident took place in Bhaisepati, Lalitpur, in front of the house belonging to Hem Khatri, a retired major general of the Nepal Army, when a group of woman activists including Shrestha were staging sit-in demanding 'justice' to Mala Shah.

The women activists have claimed that Khatri and Shah are husband and wife. According to them, of late, Khatri has started denying their relationship. However, Shah has been insisting on certifying her relationship with Khatri.

It is learnt that Shah and Khatri met several times to settle their dispute after Shah filed a case at the police. However, their talks have not yielded positive results so far. 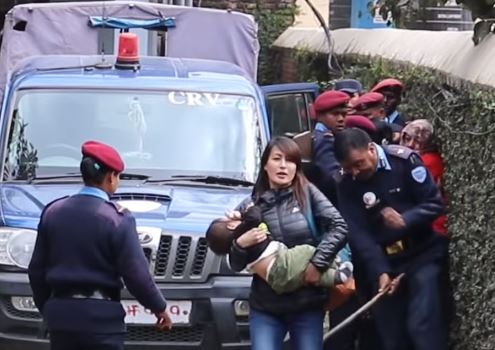 The long-disputed issue between Shah and Khatri came to the surface on Thursday again after Shah reached Khatri's house along with other woman activists. In the incident, the police baton charged activist Shrestha.  According to police, they were gaurding the house of former NA officer after he contacted police seeking for help.

Inspector Devi Prasad Poudel has faced harsh criticism on social media for thrashing and beating the woman carrying her kid. However, he said he just stopped Shrestha from entering the house of Mr. Khatri and had no intention to use force. 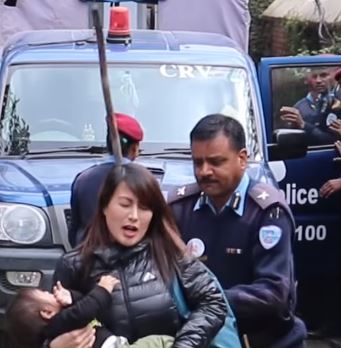 According to witnesses, the police arrested four women for attempting to enter Khatri's house.

Spokesperson at the Metropolitan Police Lalitpur Durga Singh said that they will launch a probe into the incident. "The police had to lathi charge a group of women after they vandalized the house of Khatri," she said.

On the lead up to the Constitution Day and the day itself last week, as cynics on social media were... Read More...

Facebook was launched on February 4, 2004, by Mark Zuckerberg.  The sole motive behind Facebook was to bring the whole... Read More...

PM Oli addresses the nation (with video)
23 hours ago