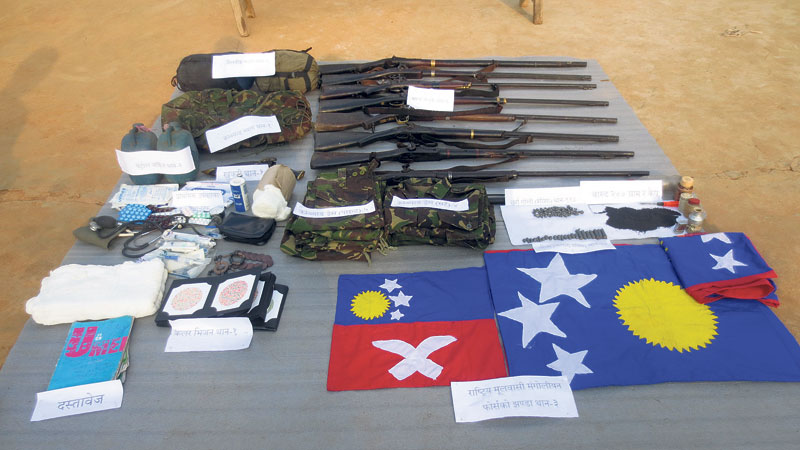 Police in Rolpa display the arms and logistics seized from Mongol Mulbasi Force in the district on Monday. (Hira Bahadur Ghartimagar/ Republica)

KATHMANDU, Oct 24: While police and the other security agencies have been focused on containing various combat outfits in the Tarai-Madesh districts, a new trend of forming similar armed groups in the hills has come to the fore.

In a recent operation  carried out jointly by the Special Bureau of Nepal Police and the Metropolitan Police Commissioner’s Office, Ranipokhari, police uncovered the activities of an armed outfit identified as the Mongol Mulbasi Rastriya Force, with the arrest of leaders and cadres of the group. The armed outfit, comprising three smaller outfits-Mongol National Force, Mongol Mulbasi Force (Kinrati) and Samyukta Jatiya Mukti Morcha-was formed only last year and was found to have been active in the hill districts.

The new trend of forming armed outfits with the participation of former rebels of the Maoists and other extremist groups and ethnic communities came to the fore with the arrest of a suspect in Bhaktapur last week.

“While connecting the dots between suspects and their activities, we were able to uncover an entire network and its tactical plans for terror attacks, lootings and ransom collection, among other things,” AIG Pratap Singh Thapa of Metropolitan Police Commissioner’s Office said on Monday.  The man initially arrested in Bhaktapur was 43-year-old Sachin Palungwa of Panchami VDC-3, Paanchthar district. Two pistols were seized from his possession.

Within days of his arrest, police also arrested 12 others from Bhaktapur, Sindhupalchowk and Rolpa districts along with various arms and ammunition, explosives, political documents and other items.

Others arrested are Palungwa of Panchthar, Suwas Rai of Salle-5 in Khotang, who is deputy commander of a special task force, Rabin Shrestha of Chautara-5, Ban Bahadur Syangbo of Golchhe-4 and Ajay Tamang of Gumba-5, the last three from Sindhupalchowk and active members of the outfit.

“Though the organizational structure and documents are found to be political in nature, the modus operandi of the outfit is totally unlawful and criminally-motivated,” said DIG Bam Bahadur Bhandari, chief of the Special Bureau.
However, they claim to be a political force struggling to demolish the existing setup in the country and its bodies, for the sake of a ‘new and prosperous Nepal’.

As per the strategy of the outfit, they were planning to collect weapons through attacks on police units, fund themselves by looting financial institutions and collecting ransom from businesses. Their first attempts to ambush vehicles, loot passengers and raid jewelry shops floundered for various reasons.

“The outfit is found to have a military wing- Mongol National Army- that comprises two structures, including a Mongol Mukti Sena and a Mongol Mukti Commando. They were trained by former Maoist deserters,” said DIG Bhandari. The military wing was designed with five brigades and 25 command posts. So far they have only 104 active members, police stated.

Police have seized two revolvers, two other pistols, 12 rounds of ammunition and explosives in Kathmandu Valley and nine handmade air guns, 22 rounds of glass bullet, 100 pieces of shrapnel and combat dress among other things in Rolpa, according to AIG Thapa. They have also seized fake citizenship cards, driving licenses and other documents from them.