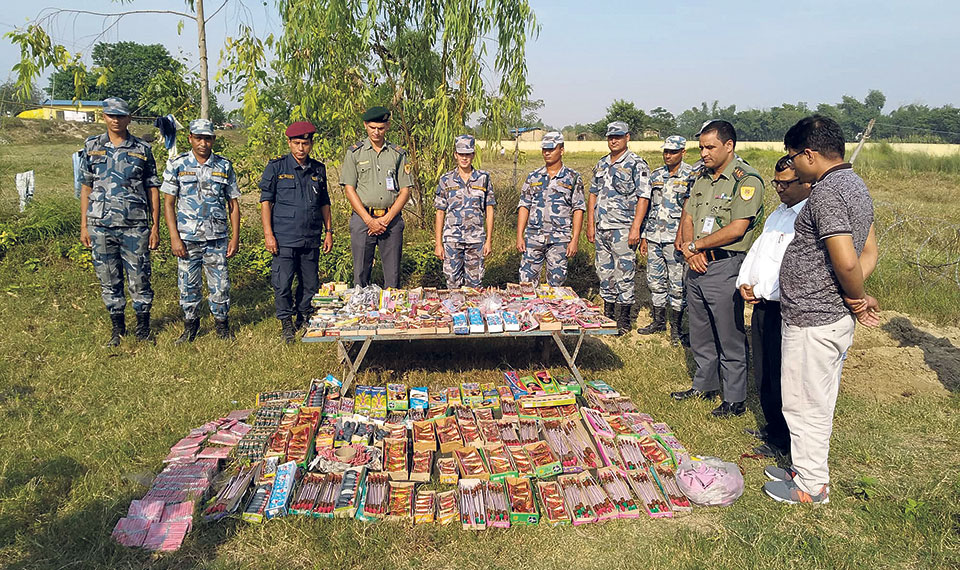 KATHMANDU, Oct 24: As the festival of lights is fast approaching, the illegal import of firecrackers are being strictly monitored by the police in the border areas. While the government is taking steps to make the festival safer, police have formed special squads to actively seize the crackers.

Chandra Dev Bhatta, Border Observation Post (BOP) in-charge of the Armed Police Force (APF) in Tikapur, said, “Suppliers usually fake an excuse of importing the crackers for personal use when questioned by the customs department. ”

According to the APF, the suppliers are bringing the crackers from Tikuniya, India. “All the seized crackers have been destroyed by the concerned authorities,” said Bhatta, adding that security teams are actively monitoring the border areas.

Armed Police Force in Khakraula, Tikapur have seized firecrackers worth Rs 106,790 so far this season. The crackers were brought from Tikuniya, India, according to the APF team.

Meanwhile, in Udayapur district, police on Wednesday arrested Rekha Yadav in possession of 12 bundles of crackers and 88 kilos of tobacco. She possessed four suspicious sacks which were seized by police during a regular checking while she was entering Triyuga Municipality in a bus.

Superintendent of Police (SP) Bir Bahadur Budhamagar, chief  of the District Police Office, Udayapur, said, “The woman has been detained for investigation but has not said anything so far.”

Although firecrackers have been banned, the sale of crackers within the nation during Tihar is rampant. The government has imposed a ban on sale and use of firecrackers in order to ensure safety of people during the festival.

Janak Raj Panta, spokesperson of the District Administration Office, Jajarkot has requested the locals to refrain from using firecrackers during Tihar.

“The concerned authorities will take strict action against those who distribute, sell or light firecrackers,” he said adding that playing deusi-bhailo after 10 pm would also be punishable as per the law. He requested the locals to celebrate the festival in a civilized way.

A 10-day Mobile Festival has started at Vishwojyoti Mobile Mart at the Vishwajyoti Mall in Jamal, Kathmandu. CEOs of six... Read More...