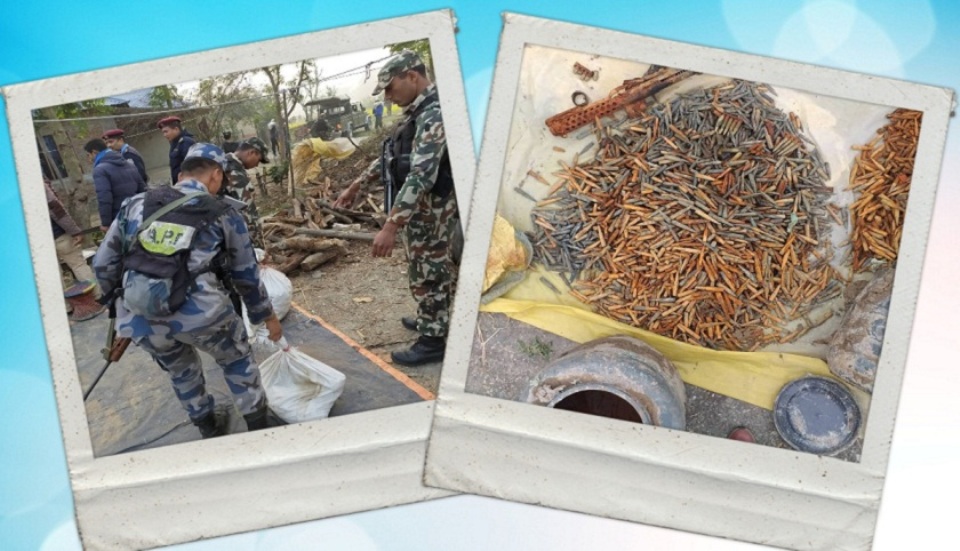 DHARAN, Dec 22: Police have discovered a huge cache of arms and ammunitions from a poultry farm located at Barahakshetra municipality-7 in Sunsari district on Sunday.

According to Senior Superintendent of Police Yagya Binod Pokharel, cops seized one submachine gun and 10,000 bullets from the poultry farm belonging to Khem Pradhan, a former Maoist cadre. Pradhan had gone semi-underground during the 10-year Maoist conflict.

Acting on a tip-off, the police personnel carried out the raid and recovered the ammunitions after digging the land which was being used to run a poultry farm.

"In course of digging up the poultry farm, the arms and weapons were found packed in a plastic bag inside the water tank," Pokharel said.

Pradhan, a local resident, was running a chicken farm since 2010.

According to SP Pokharel, the unearthed arms and ammunitions seem to have kept hidden long ago during the war era. He refused to divulge the details saying that the investigation is on.

UDAYAPUR, April 22: There is a shortage of medical equipment to expand  coronavirus testing in Bhulke and Triyuga of Triyuga... Read More...

724 candidates had their deposit seized