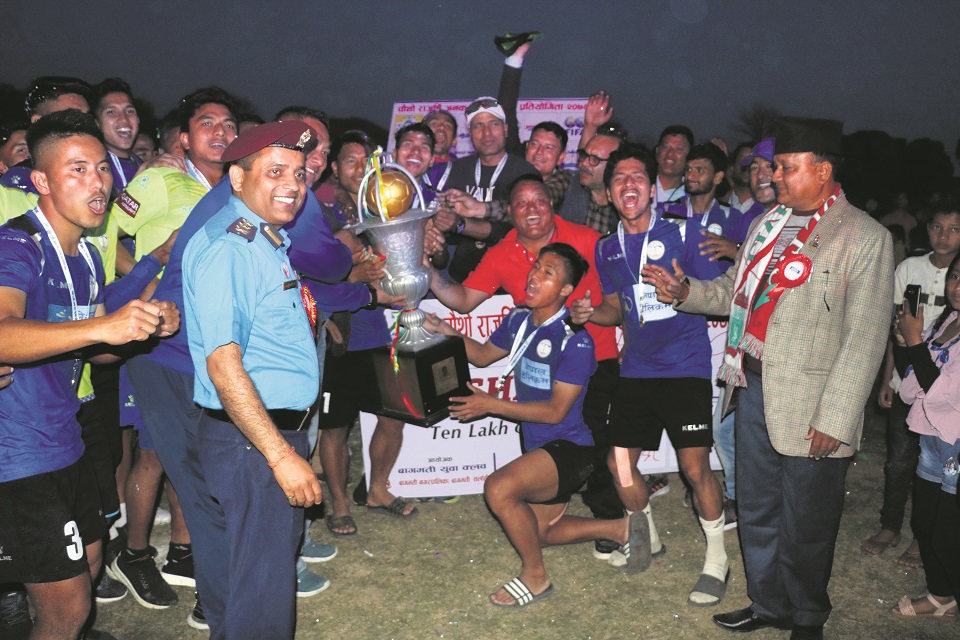 Members of Nepal Police Club pose with the trophy after winning the Rajshree Janak Gold Cup football tournament in Sarlahi on Sunday.

Tirtha Rana Magar and veteran Jumani Rai registered their respective names in the score-sheet to propel Police Club to its first trophy in the calendar year. It secured the cash prize of Rs 1 million whereas Kanchanjunga bagged Rs 500,000.

Rana Magar opened the scorings in the second minute of the match to give Police Club an early lead.

Similarly, Rai doubled the lead ten minutes later. Kanchajunga conceded a free-kick which was taken by Pramod Bhattarai. Rai lashed on Bhattarai’s delivery to head in a goal from a close range.
Kanchanjunga returned a goal in the 19th minute during an action-packed start of the final match. Amir Lama’s shot from outside the d-area was enough to beat Police Club goalkeeper Sanjeet Shrestha.

Police Club was forced to field a second XI after most of the first team players were tired, featuring in the final match against ManangMarsyandgi Club during the AahaRara Gold Cup held in Pokhara on Saturday.

Veterans Rai and defender Rabin Shrestha led the team with young players to the title against a competitive Kanchanjunga.

Police Club coach Sanjeev Joshi praised his players for producing a breathtaking performance in the final match despite resting majority of the senior players. He gave full credit to the young players for securing the title after the team traveled to Sarlahi overnight after participating in the final match at Pokhara on Saturday.

Kanchanjunga, however, faltered in the final match after defeating a strong home side Bagmati Municipality Team earlier in the tournament. Bagmati featured the likes of Bimal Gharti Magar, Buddha Chemjong, Sunil Bal and a couple of African players. Similarly, the team had defeated Jawalakhel Youth Club in the semifinal.

Kanchanjunga coach Dinkar Chhetri rued a tough scheduling of the matches as the prime reason for the loss in the final match. The team had played the semifinal match against a demanding team on Saturday. “The players gave their all but it was not enough from a tiring team,” said Chhetri. Kanchanjunga’s Subroto Suren was adjudged the player-of-the-match.

Sarlahi home-boy Rai secured the best player of the tournament award, securing a cash prize of Rs 51,000 whilst his coach Joshi was recognized with the best coach award.

Likewise, the emerging player of the tournament, Bagmati’s Bijay Ghalan was awarded with a motorbike.