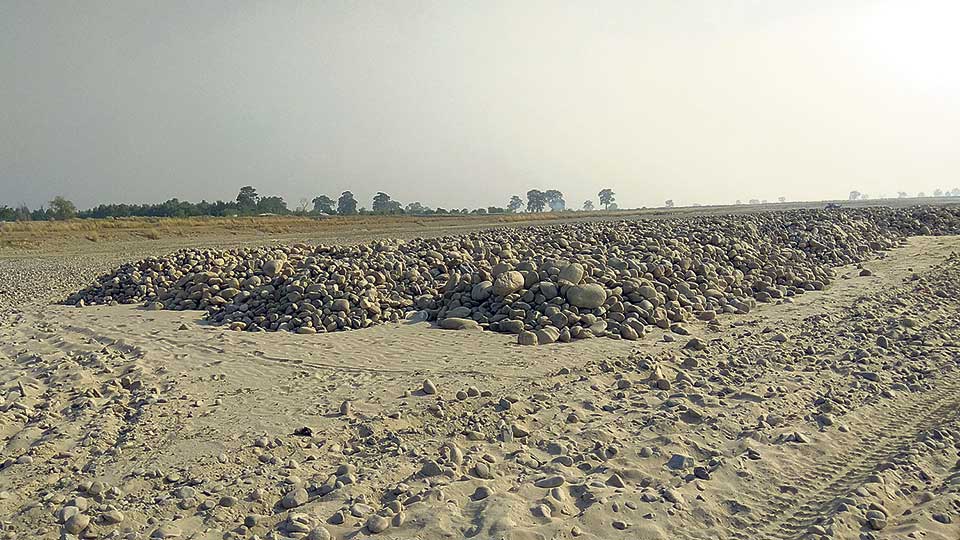 Stones collected on the bank of Bagmati River in Sarlahi for extraction in this recent photo. | Photo: Tanka Chhetri/Republica

RAUTAHAT, Nov 22: Shiva Shankar Crusher Plant of Garuda Municipality-5, Jhanjhpul extracts gravels, stones and sand full of 22 tippers everyday from the Bagmati River at Ramauli Ghat, which actually falls under the jurisdiction of Brindaban Municipality. When Brindaban's Mayor Ram Sinehi Yadav asked the operator of the crusher plant Dayaram Sah regarding the rampant excavation in the river, he replied that he sought permission from the District Monitoring Committee, Rautahat.

Movement of heavy tippers has resulted in cracks and bumps in the newly constructed roads, and has affected the bridge as well. After repeated complaints from locals, police on Tuesday took action against those involved in illegal excavation. Police seized an excavator and three tippers from the bank of Bagmati River, which flows in between Rautaht and Sarlahi.

On the other hand, an excavator working in the river has been kept under police surveillance.

Since five days, the crusher plant was regularly extracting 22 tippers of construction materials on a daily basis without seeking permission from the higher authority. It has been found that the plant was continuing the illegal work by deceiving Brindaban's mayor.

Brindban Municipality has awarded a tender of Rs 16 million to Baba Vishwakarma Construction Service, Hardiya (BBCCH) for the extraction of resources from Bagmati. But Harendra Lohar, chief of BBCCH, claims that he has no idea about the excavation. Instead, he said that he informed police after finding out that another plant is extracting materials from the area assigned to them. He told Republica that he would be seeking compensation from that company.

According to locals, the availability of construction materials is very low in the river this year as the region witnessed less flooding this year. Digging the river banks up to 4 meters for excavation has left the locals worried that it might increase the risk of floods next year.