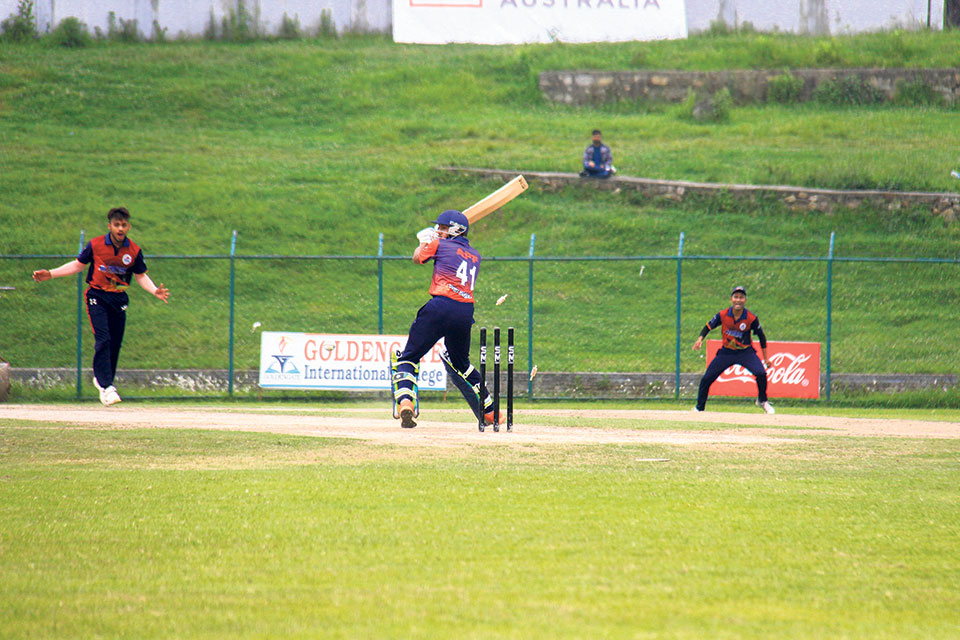 Police completed the chase in 9.3 overs as APF bowed out of the tournament in the semis.
The 41-run target is the lowest team total ever registered in PM Cup history breaking Karnali Province’s 47 runs record against Province 1 set earlier in this edition during a group stage match.
Kushal Bhurtel started the destruction with his lively spell with the new ball. He clean-bowled Aasif Sheikh with a well disguised cutter, dismissed Pradeep Airee caught at mid-off by Dipendra Singh Airee and once again deceived Sumit Maharjan to disturb his leg-stump.

Police captain Manjeet Shrestha soon introduced spinner Sagar Dhakal at the other end as APF batsmen were kept guessing in a forgettable day of batting. Dhakal trapped Sharad Vesawkar LBW on seven runs which was the highest individual score of the innings. Similarly, he further took wickets of Prithu Baskota and Avinash Bohora to complete his three-wicket-haul.

Only four boundaries were hit during the innings with Vesawkar, Baskota, Jora and Amar Singh Routela scoring one each.

Chasing the target, Pawan Sarraf made a crucial contribution staying unbeaten on 21 runs off 14 deliveries which included four boundaries.

Earlier, Police won the toss and elected to bowl first. Police players were struggling to chase at one stage being removed for 23 runs for the loss of five wickets.

APF was in with a chance after Dipendra Singh Airee was dismissed for 13 runs excellently caught by Dipendra Rawat at point area diving full-stretch.

APF skipper Regmi was unhappy with the approach of the batsmen and rued the chance to put up a better total. “There was nothing wrong with the pitch. Our batsmen made poor shot selections. A total of over 150 could have been a competitive score.”

Police will face Tribhuvan Army Club in the final on Saturday at Kirtipur. Army will play in third consecutive final of the PM Cup whereas both finalists jointly lifted the trophy in the first edition as rain spoiled the game. Army had lost the final against APF in second edition.

Prithvi Highway resumes after 11 hours of disruption
37 minutes ago