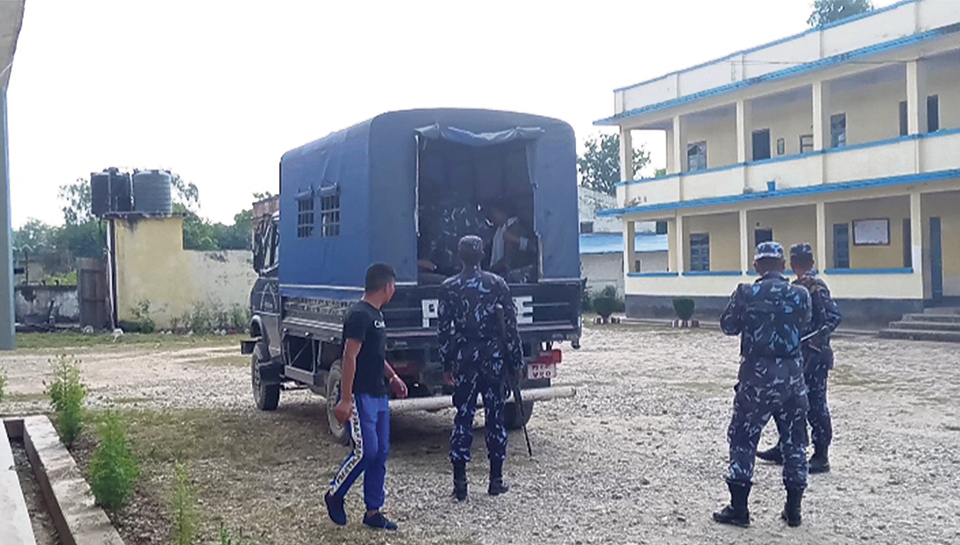 DANG, Oct 18: In a major crackdown against the  Communist Party of Nepal (CPN) led by Netra Bikram Chand, police on Thursday arrested 21 of its central level leaders and cadres from the Mungretakhola area of Rajpur Rural Municipality, Dang district.

Acting on a tip-off, a team of 18 police personnel from the District Police Office rounded up the 21 in the wee hours of Thursday after staking out the houses where they were sheltering.

According to CPN sources, those arrested include Chanda Bahadur Chand aka Birjung, who is an elder brother of the outlawed outfit’s chief, Netra Bikram Chand. The elder Chand is also the outfit’s central committee member and its Lumbini in-charge and mid-western command in-charge.

Although all those arrested were brought to the District Police Office at Ghorahi at about 11 am Thursday, police have not released any further details.

Officials said they were unable to release the details as those arrested have not given their correct names to the police. “We are having some difficulty identifying them as they have declined to say their names, and they have also been giving different home addresses,” said Chief District Officer (CDO) of Dang, Govinda Rijal.

This is a major crackdown against the underground Maoist outfit. The government had decided back in March to ban their activities and go on the offensive. Security personnel have so far gunned down three senior leaders of the CPN and arrested over 600 other leaders from the central to the district level. This had decimated its entire structure.

In addition to the police killings, at least five cadres were killed in Kathmandu when some bombs they were handling went off accidentally.

Police said they recovered a huge cache of arms and ammunition from those arrested. They have not released any details about the types of arms. Journalists were even barred taking photos of those arrested.

Sources also said some of the  CPN leaders and cadres managed to make a getaway. DSP Binod Bikram Shah at District Police Office, Dang said, “We are currently working to establish the types of arms seized and the quantity.”

Police had closed in after learning that a group of CPN leaders and cadres were gathering in the area near the border with India for the outfit’s Rapti bureau meeting. The police team set out from Ghorahi Wednesday evening and reached the target village at about 2 am after walking through dense forest for two hours. The CPN leaders were found sleeping in one of the houses in the village.  Senior leaders were in the village for the meeting.

Preliminary investigations show that the meeting was meant to carry out a review and set a new course of action as well as provide orientation to the lower-rung leaders.

CDO Rijal said they will initiate legal action against those arrested on the basis of any crimes they may have committed in the past.

MALEKHU, May 13: As many as six persons were arrested in possession of weapons during a joint checking carried out... Read More...

Two killed in mini truck accident in Dhading
18 minutes ago