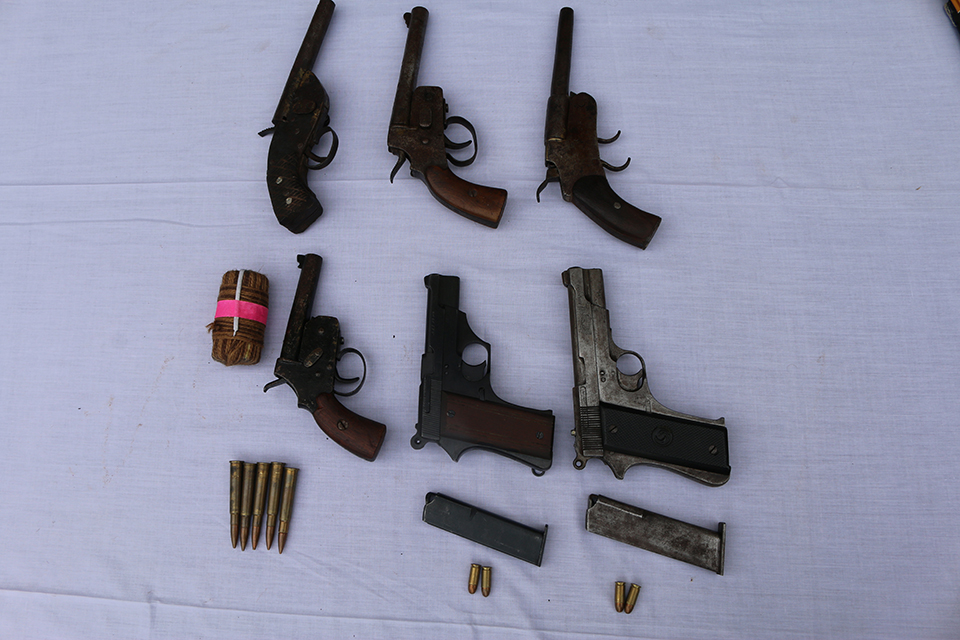 Some of the arms and ammunition seized from Netra Bikram Chand’s cadres during a police raid on Wednesday night. The police arrested 21 Chand outfit’s leaders and cadres during the raid. Photo: Devendra Basnet/Republica

DANG, Oct 19: Police on Friday filed a case of sedition against 21 Netra Bikram Chand-led Communist Party of Nepal (CPN) leaders and cadres who were arrested on Thursday from the Mungretakhola area of Rajpur Rural Municipality, Dang district. They were arrested while they were gathering near the border with India for a meeting of the outlawed party’s Rapti bureau. Police have filed a case of sedition against them at the Dang District Court, according to Superintendent of Police (SP) Janak Bhattarai, chief of District Police Office, Dang.

Police have also seized six pistols, five rifle bullets and explosives, among other things, from those arrested. According to Provincial Police Office, Tulsipur, a total of 192 leaders and cadres of CPN have been arrested from Province 5 so far. Of those, 44 were arrested from Dang alone.

“The Chand-led CPN has been taking advantage of the region’s geography,” said SP Bhattarai. Likewise, a total of 28 cadres have been arrested from Rolpa, 19 from Nawalparasi, and 16 each from Bardiya, Pyuthan and Kapilvastu, according to the Provincial Police Office. Similarly, police have also arrested 11 leaders and cadres of CPN from Banke, 10 from Arghakhanchi, six from Rukum, and five each from Palpa and Gulmi.

KATHMANDU, July 1: A joint team of Nepal Police and Armed Police Force engaged in an exchange of fire with... Read More...