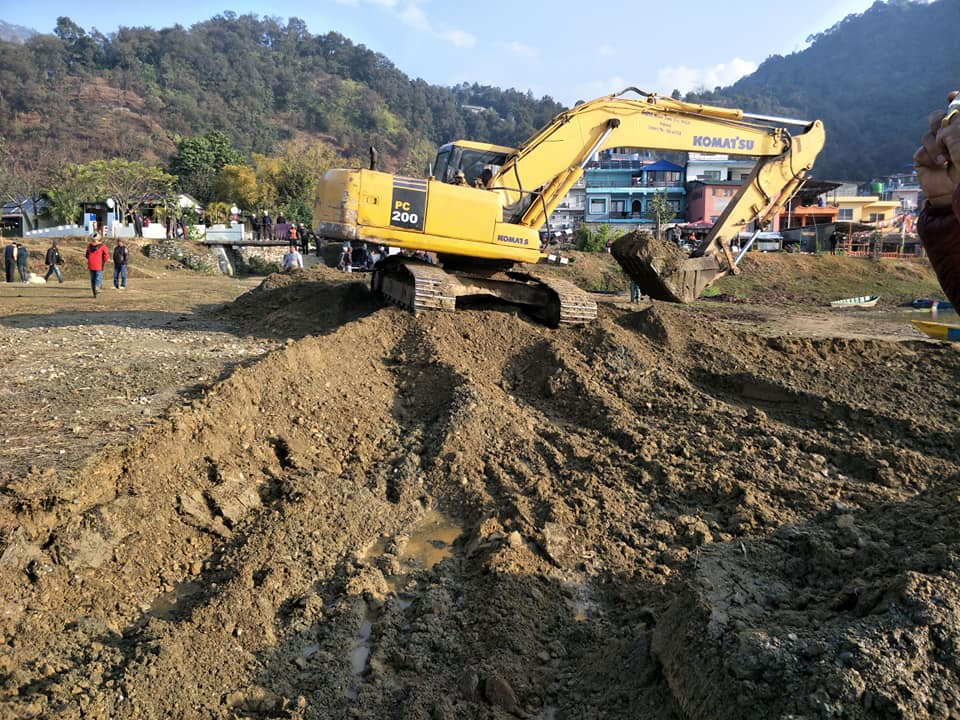 The PMC's move comes following the Supreme Court's order to conserve the Fewa Lake to reverse its shrinking size. Today's cleanup campaign aims to extract 20,000 MT of mud from around four  ropanis of land. The metropolis aims to launch a campaign to remove mud from the periphery of the lake.

Chief Minister of Gandaki Province, Prithvi Subba Gurung said that conserving the Fewa Lake rest on combined efforts of all tiers of the government. He added that the province would also implement the Supreme Court's verdict.

An 11-member committee was formed under the Provincial Minister for Industry, Tourism, Forest and Environment Bikash Lamsal to implement the Supreme Court's verdict.

Rajiv Pahari, who has been fighting for the conservation of the lake, has shared some of the ways to conserve the lake.

Pahari also argued that it is equally important to make record of structures built in line with the set standards and whether their owners need to be provided compensation within three months. “We should not make further delay to return 1692 ropanis of land registered in the name of individuals after taking a decision to this effect through the cabinet,” he added.

Further, there is also a need to ensure clean-up of Fewa lake and conduct and start gardening the wetland. “The dam of Fewa Lake has already become old. Since the dam is already in a dilapidated state there is a need to build a one-meter tall dam,” he said, adding that the lake would get a new lease of life if a dam is built between Chankhapur to Mohare and making a provision to send only clean water into the lake.

POKHARA, Feb 16: A demarcation committee has prepared a report stating that the new area of Fewa Lake is 5.72... Read More...

Maoists had difficulties winning elections even in their bastions
13 hours ago
Why is Climate Finance a Focus Area for Nepal?
7 hours ago

Fraud on the rise in foreign employment
12 hours ago