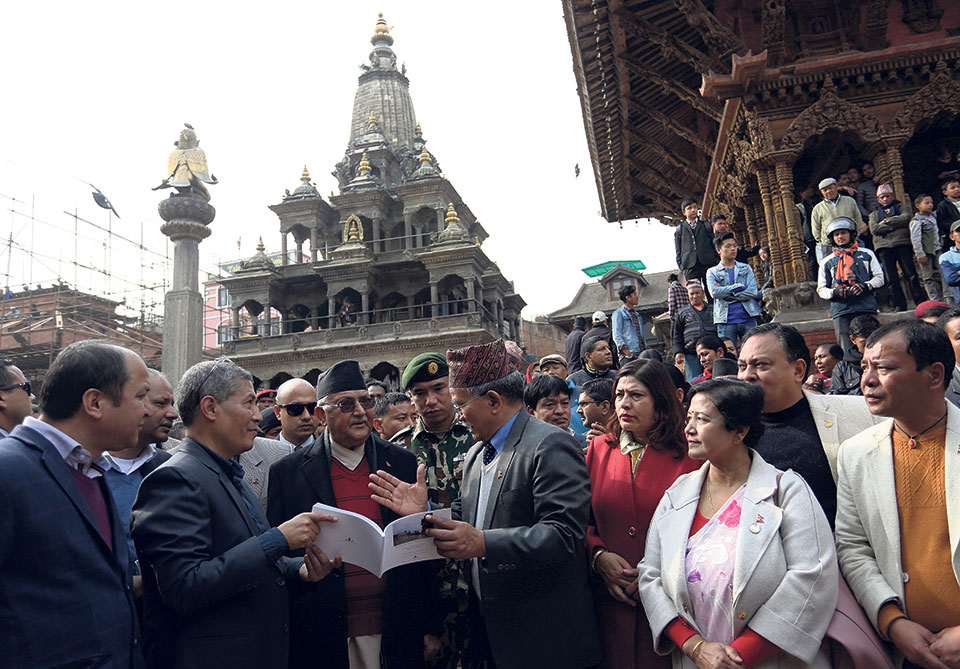 KATHMANDU, Jan 17: On the invitation of the Mayor of the Lalitpur Metropolitan City (LMC) Chirbabu Maharjan, Prime Minister KP Oli visited the Patan Durbar Square on Wednesday to inspect the progress made in the reconstruction of the heritage site which suffered huge damage in the 2015 earthquakes.

Earlier, Prime Minister Oli issuing a message on the occasion of the ‘21st National Earthquake Safety Day’ said, “We are into a campaign to construct safe housing, school buildings, and settlements. We will build all structures that are earthquake resilient.”

Referring to the devastating earthquakes of April 2015, Prime Minister Oli said the government has arranged for reconstructing safe settlements for the quake survivors that are residing on public lands. “The government has brought Integrated Working Procedure for Subsidized Credit 2018, through which those quake survivors unable to start reconstruction of their houses for want of adequate funds can seek for concessional loans up to Rs 300,000.”

As in the previous years, various events are planned to observe the Earthquake Safety Day throughout Nepal as a collaborative effort of various stakeholders under the leadership of Government of Nepal, Ministry of Home Affairs.