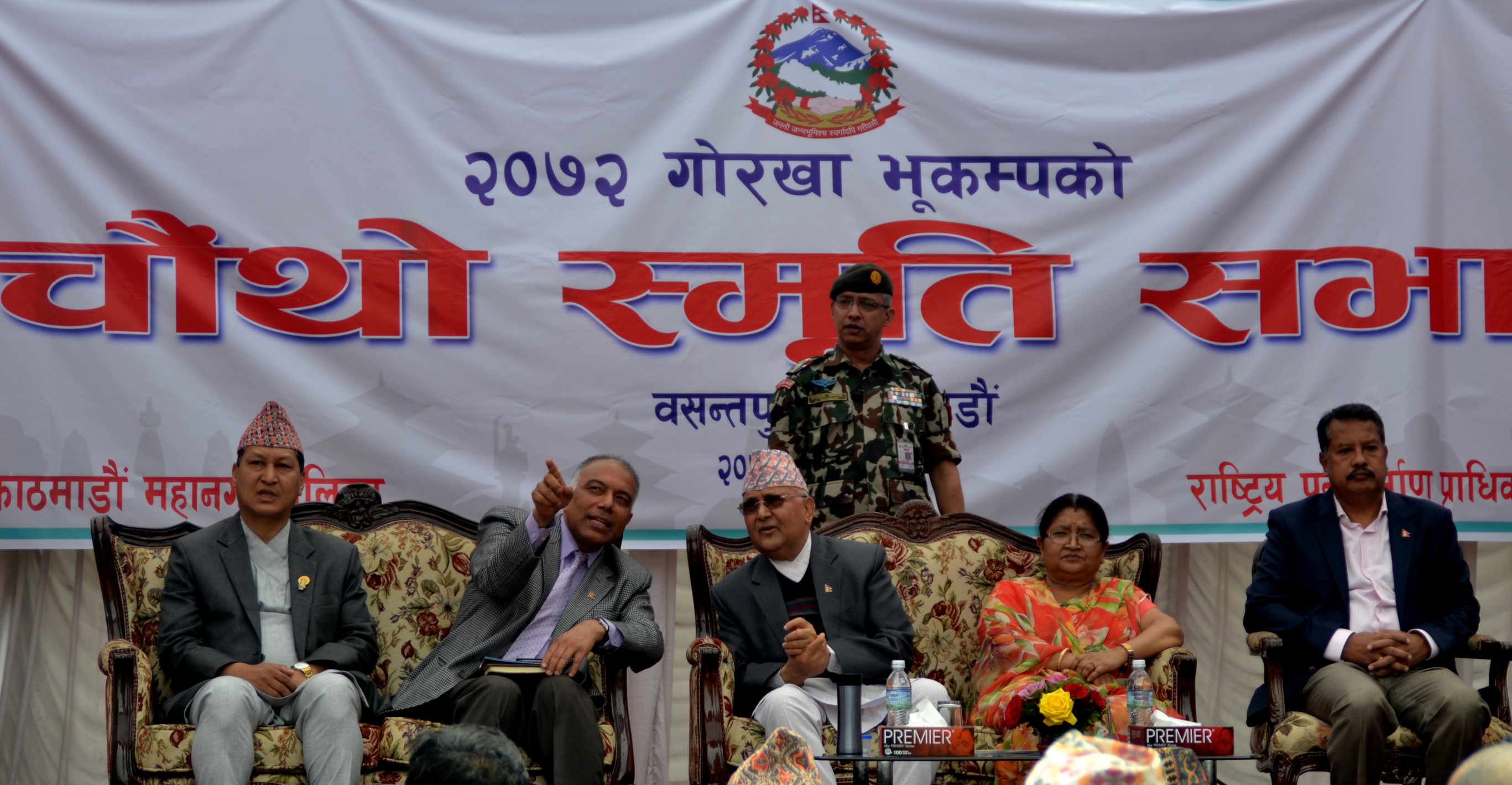 KATHMANDU, April 25: Prime Minister KP Sharma Oli has stressed the need for reconstructing and conserving the heritages in their original styles. PM Oli was saying this during a program organized jointly by National Reconstruction Authority (NRA) and Kathmandu Metropolitan City on the occasion of the 4th Earthquake Memorial Day in the capital city on Thursday.

Stating that Nepal was in the quake-prone zone, the PM reiterated the construction of quake-resistant structures. The financial and technical assistance were provided for making the quake resilient structures, he added. "Government has provided grants to ensure that the structures to be built hereafter would be strong. So, the reconstruction must be completed within the slated time," the PM reminded.

According to him, the heritages, ancient scriptures and purana prove that Nepal is the country of wise people. Nepal was/is never in anyone's colony. Strong build of the historical places out of the Kathmandu Valley was going on, he said, adding that as Nepal was rich in heritage, the heritages must be preserved. PM Oli urged the NRA to expedite the fulfilment of its duties.

He also expressed thanks to all those who contributed to the reconstructions activities. On the occasion, NRA Chief Executive Officer, Sushil Gyawali, expressed commitment that all structures except the archaeological heritages damaged by the earthquake would be completed within coming 20 months. He shared the information that all seven cultural places of the Kathmandu Valley listed in the World Heritage Site would be constructed in a quake-resistant manner with the formulation of the long term plan. NRA has also brought special programs for 62 settlements of the quakes affected areas. In order to intensify the reconstruction activities, the Procurement Work Procedure would be amended.

KMC Mayor Bidya Sundar Shakya also stressed on speeding up the reconstruction works in the city. He added that 32 Wards in the KMC were witnessing reconstruction works but some obstructions created intentionally must be cleared. He expected the support from PM Oli to clear the obstacles. On the occasion, PM Oli inspected Basantapur Durbar Square and Kasthamandap area. He observed the reconstruction tasks with keen interest. PM Oli also inspected the woodcarving laboratory there. The Head of the Government also attended a religious function organized on the Kalbhairav Temple premises in memory of those who were killed in the quake.

Moreover, the PM inaugurated the Shiva Temple that was damaged by the quake. Oli, who was accompanied by his spouse Radhika Shakya, also observed the undergoing reconstruction works of Nasal Chowk, Nine-storey Palace inside the Hanuman Dhoka Durbar Square. Best Performing Units Feted Local units, Wards and District Project Implementation Unit were feted for their excellent performance in reconstruction. Nawakunda of Rasurwa district, Barpark and Sulikot of Gorkha and Kalinchowk Rural Municipality were feted as the best local units. Likewise, the PM honoured the District Project Implementation Units of Sindhupalchowk, Gorkha, Dolakha, Ramechap and Kavrepalanchwok for their high delivery of the reconstruction works. RSS