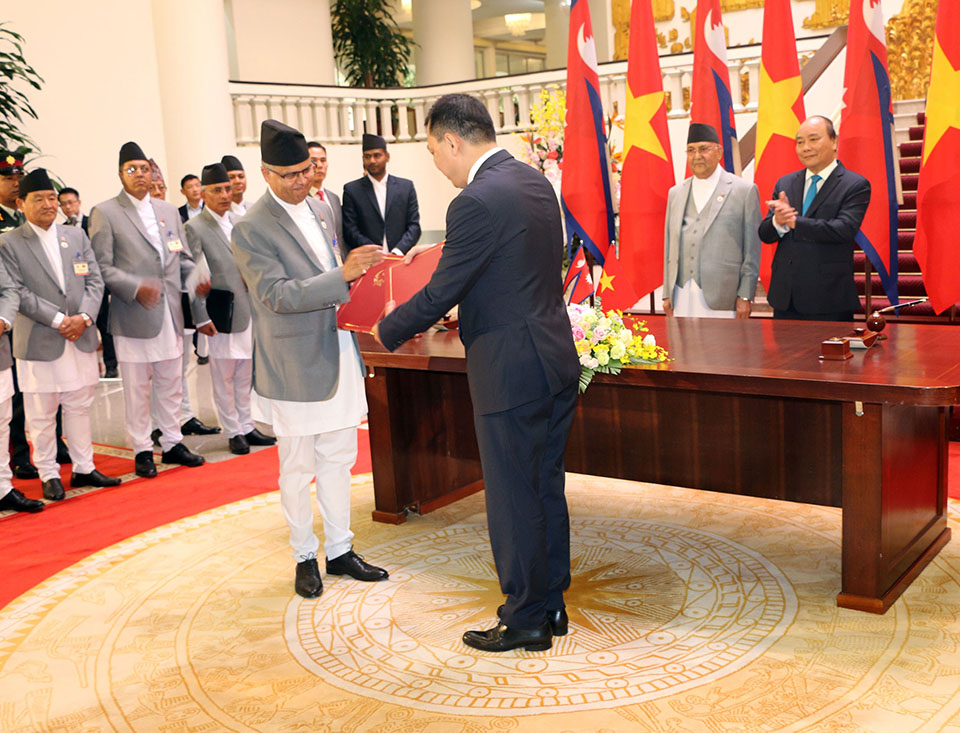 HANOI, May 11: Visiting Prime Minister KP Sharma Oli has called on Prime Minister of Viet Nam Nguyen Xuan Phuc at the office of the Prime Minister here in Hanoi. Earlier, PM Oli was received by the Vietnamese PM at Presidential Office and a contingent of Vietnamese Army had presented a guard of honor to him.

It is stated that the PM duo held discussions on the contemporary political situations and the various dimensions of development and prosperity.

According to Nepali Ambassador to Thailand Khagnath Adhikari who was one of the delegates in the meeting, overall bilateral issues and areas of concerns in bilateral and regional levels were discussed in the meeting.

PM Oli also shared that Nepal will be the organizer of Vesak Day programme in 2020 in Lumbini as Nepal is marking visit Nepal-2020 next year. Prime Minister Oli also urged Viet Nam to join hands in ‘build Lumbini project’.

The Prime Minister duo also discussed agreements on exemption of visa to diplomatic and official passport bearers and MoU on the establishment of bilateral consultation mechanism between two governments and letter of intent on negotiation on trade and investment framework agreement. According to Adhikari, the PM Oli extended an invitation to Vietnamese Prime Minister to visit Nepal in his convenient time.

Similarly, according to Vietnamese officials, Vietnamese Prime Minister Phuc shared that the cooperation might be enhanced in agro and tourism sectors keeping the interests of both countries in centre. He said that he was interested in supporting Nepal for its holistic development.