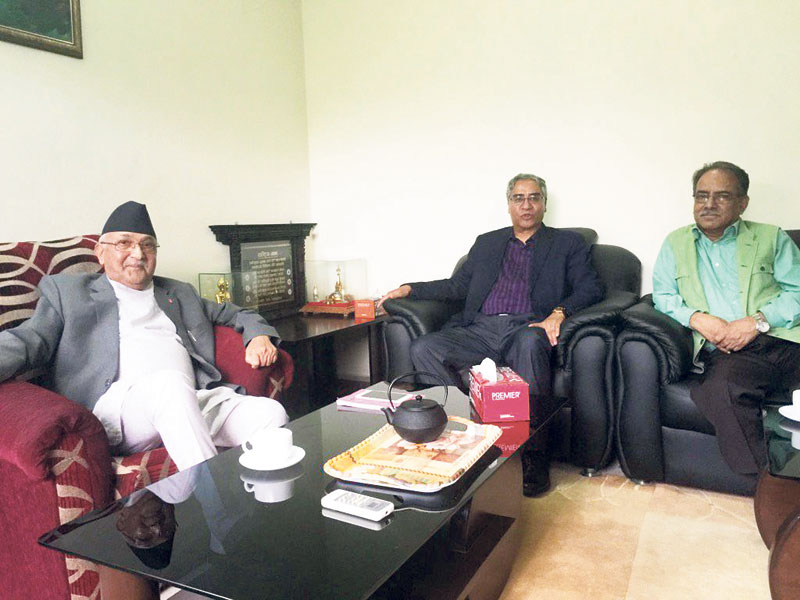 PM Oli on Monday invited the two leaders, who initiated and registered the no-confidence motion against him in Parliament, to discuss ways to find a solution to the latest political situation.

According to the PM's press advisor Promod Dahal, Oli raised the issue of constitutional complexities regarding the formation of a new government while Deuba and Dahal for their part urged him to resign and ease  the situation.

"How could you ask for my resignation after registering a no-confidence motion? Resignation was possible if there was consensus and an environment of trust," the press advisor quoted PM Oli as saying.

According to sources close to Deuba and Dahal, the two leaders suggested to PM Oli not to fall for the argument that there is no constitutional provision for forming a new government. "A new government could be formed in line with the Constitution. Such an argument that goes against political culture should not come from a top political leader," a source quoted Deuba as saying.

"You can remain prime minister if you garner the confidence but you should not be an obstacle to the forming of a new government if you fail to do so," the source further quoted Dahal.

According to press advisor Dahal, the PM replied that he will follow the Constitution and respect its supremacy.

The PM also requested Deuba and Dahal not to let confrontation grow in Parliament. "The PM raised questions over the speaker's move delaying the business of endorsing bills related to the budget. He said such a move could aggravate confrontation," according to the press advisor.

Earlier on Monday, PM Oli, speaking at a function in the capital, denied a rumor that he might dissolve Parliament. "Where can we play the game if we destroy the playground? I cannot even think of dissolving Parliament," said Oli at the 55th anniversary of Nepal Engineers Association.

Following the decision of coalition partner CPN (Maoist Center) to withdraw its support, the government led by CPN-UML Chairman KP Sharma Oli has been reduced to a minority. Forming a new coalition with the Nepali Congress, the Maoist Center then registered a no-confidence motion in Parliament against the PM to clear the way for Chairman Dahal to become prime minister again.

Speaker Onsari Gharti has scheduled discussions on the no-confidence motion for Thursday.

Kathmandu, July 20: The leaderships of the Nepali Congress and the CPN (Maoist-Center) have begun discussion about the imminent deliberation... Read More...

In pics: People celebrate Gaijatra in Sankhu
37 minutes ago