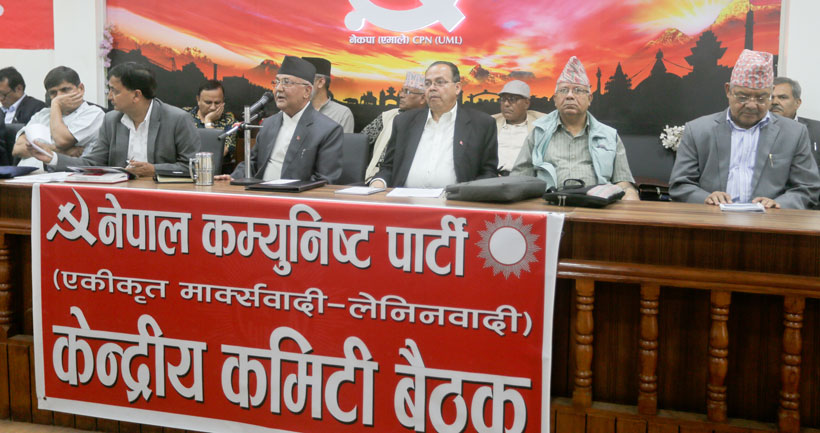 UML Chairman KP Sharma Oli and other leaders during the inaugural session of the central committee meeting of the party in Kathmandu.(Dinesh Gole)

Speaking at an inaugural session of the party central committee meeting that kicked off here from Wednesday, the former Prime Minister accused PM Dahal of failing to respect diplomatic norms and values during his recent state visit to the southern neighbor.

"It is really inappropriate, immature and wrong to directly report the names of political parties and leaders of the country seeming against India during the visit," he said, accusing PM Dahal of also making comments against China during the trip.

The UML has blamed the PM's latest India visit for giving space to a neighbor to interfere in country's domestic affairs stating that both countries would hold similar views on major international issues and work in close coordination with each other in other international forum in the joint statement issued by New Delhi during the visit.

Leader Oli said though the party gave suggestion in writing to PM Dahal before he embarked on India visit with a request to maintain country's sovereignty and wished for the success of the visit, the party was provided a ground for speaking against the trip.

Nepal's foreign relation is guided by the UN's Charter, principles of Panchasheel and non-aligned policy and there was a breach in these bases during the PM's visit, he added.

The erstwhile PM criticized the incumbent government of failing to pay attention towards the implementation of the decisions of previous government and sending special envoys to China and India in dramatic way shortly after the formation of the new government.

The meeting that is expected to run for at least three days will see the presentation of party chair Oli's political report and group wise discussions about it. RSS

Former Nepali envoy to Pakistan no more
15 hours ago