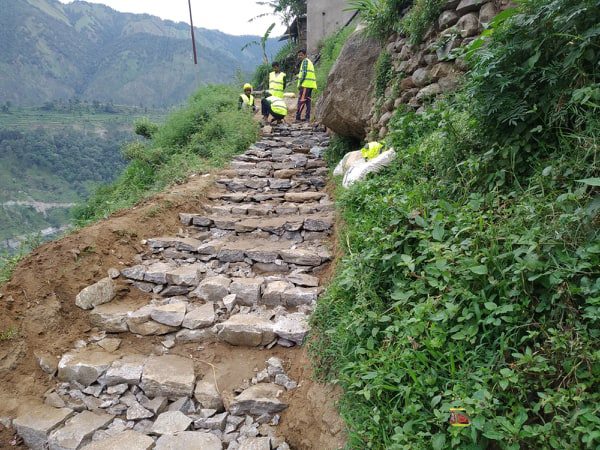 BAJURA, June 27: Albeit short-term, Prime Minister Employment Program (PMEP) is proving effective in Bajura district. Small projects, which had remained incomplete for long due to lack of resources, are now being implemented under the program.

Pramila Thapa, employment coordinator at Badimalika Municipality, said the municipality was using funds allocated for the project to build a playground and repair foot trails, among others. The municipality is implementing 16 projects under the program.Of the nine wards in the municipality, Wards 3 and 5 have a project each, while remaining wards of two projects each. Some wards are using funds to repair irrigation canals and implement drinking water projects.

Dharma Lal Padhya, the chairperson of Ward 7, said that the program has become beneficial for projects that had all necessary materials but were facing fund crunch to hire laborers. The ward is repairing a drinking water project as well as setting up Child Development Center and doing fencing works at Laxmi Secondary School. "The program has proved effective as on one hand locals are getting employment, and on the other pending works are being completed," Padhya added.

Arjun Rokaya, employment coordinator at Triveni Municipality, said he was also skeptical at the beginning. "Now, we are satisfied with the way the program is moving forward," he added.

More than 3,000 backward families in the district are benefiting from the program. Employment Coordinator of Bajura district Pramila Thapa said that laborers were paid Rs 700 per day for 15 days in the current fiscal year. "Some 320 people got employment in Badimalika Municipality alone," she said.

More than 2,300 had applied for the employment scheme in the municipality. "We selected applicants from family with low income, Dalit community and family of missing for the program," added Thapa.

According to Thapa, 25 laborers were deployed for maintenance of foot trail between Tufan Danda and Lauthi Rukh. The trail will now be operable even during monsoon, she added.

Kalamati Baduwal, who has been selected for the employment program, said she will be earning Rs 10,500 this year. "It's a huge amount for women like us. Earlier, women were not given priority for such work," she said, adding that inclusiveness has been a major attraction of this program.Each local unit in the district is implementing 10 to 20 projects under the program, according to

KATHMANDU, May 5: The National Council on Disaster Risk Reduction and Management has directed all concerned government bodies to arrange necessary... Read More...