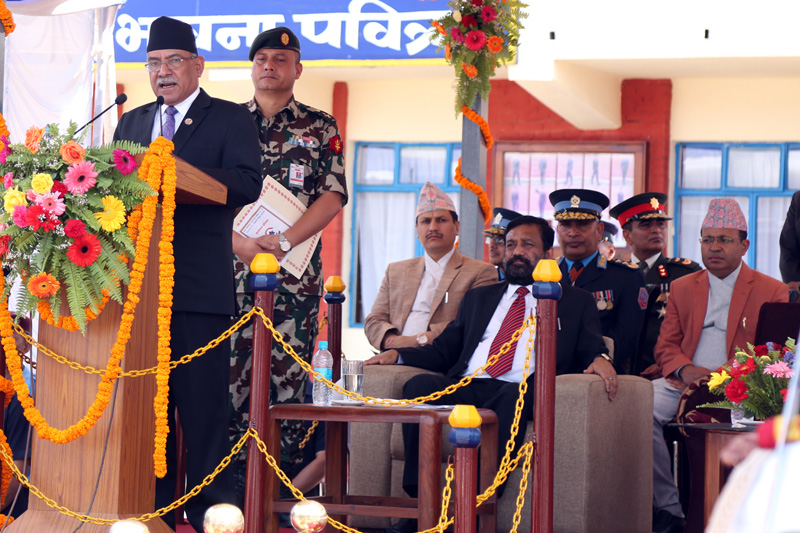 KATHMANDU, June 2: Prime Minister Pushpa Kamal Dahal has praised the Nepal Police for its role in conducting the first-phase local level election in a free, fair and fear-free environment, and also directed it to play a similar role in the second-phase local, province and federal level elections as well.

The Prime Minister congratulated the graduates of the training for completing their training course through consistent hard work stretching over 19 months, strong dedication, and conscientiousness, and wished them every success in their career and personal life.

Stating that the government has assigned to the Nepal Police the important and serious responsibility of the overall security of the state, PM said the police is also the 'legal eye' which keeps a watch in all places.

He said he felt please to learn that the Nepal Police has upgraded the Police Inspector Basic Training to PG Diploma level in affiliation to the Tribhuvan University with the objective of modernizing it and giving it the identity of international level education in recent days.

The Prime Minister stressed that refined knowledge, skills as well as sense of responsibility and constant dedication were required to effectively and professionally deal with the newer challenges and complications that have evolved with time and technological advancement.

Saying some criminal and non-state elements were making ill attempts to carry out undesirable activities taking advantage of the situation of growing demands and aspirations of the people with the state in a democracy, he directed the graduates to make the right and appropriate use of the knowledge, skills and tactics that they have learned in curbing such criminal and untoward activities.

Also, Inspector General of Police Prakash Aryal urged the police officers to discharge their duties in a disciplined manner.

Similarly, those who have stood first under various categories include Naresh Raj Malla under academic study, Nar Bahadur Saud from Kanchanpur under parade, Motilal Yonjan Tamang from Dhankuta under physical exercise, Dipak Thapa from Bagjung under police tactical, Pushkar Raj Panta from Baitadi under shooting range and Anu Lama from Kavrepalanchok in women's category.

All who completed their training were presented with prizes by Prime Minister Pushpa Kamal Dahal.

Election date will be announced within a few days: PM

KATHMANDU, Jan 4: Prime Minister Pushpa Kamal Dahal has said that the announcement of election date was forthcoming with the... Read More...