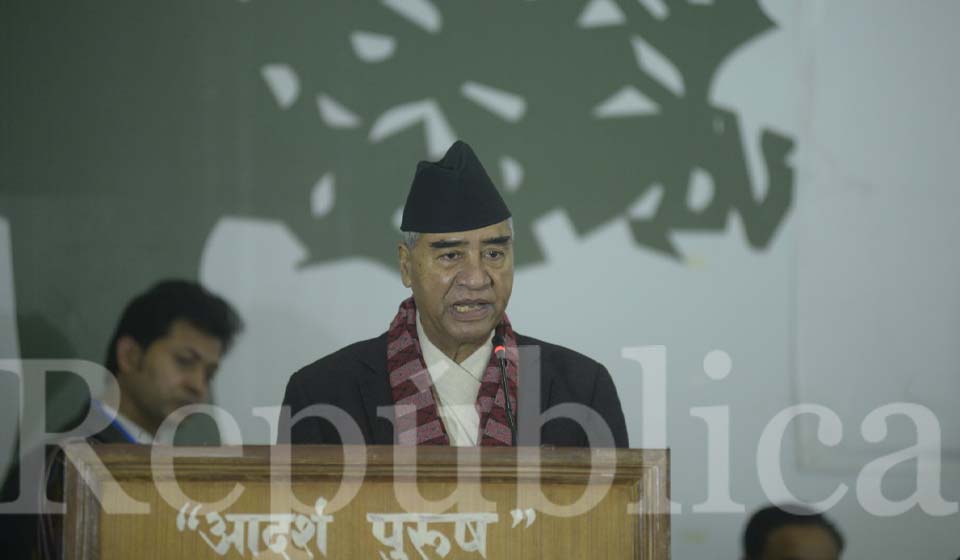 KATHMANDU, Dec 25: Prime Minister and Nepali Congress (NC) President Sher Bahadur Deuba has reaffirmed his commitment to take everyone on board to strengthen the party unity.

At a program organized at the NC's central office today to distribute certificates to the office-bearers and members elected in the NC's recently held 14th general convention, President Deuba expressed commitment to abide by the inclusiveness and democratic principles to further strengthen the party.

Prime Minister Deuba also extended his gratitude to all the voters for trusting him and casting vote to him in the general convention. Calling for cooperation from one and all to run the party, Deuba shared that he would lead the party including even those who did not cast their votes for him.

On the occasion, Deuba claimed that the way NC held its general convention in a democratic manner from ward to the central level was a rare occurrence in the other political party's activities and that such exercise proved that the NC alone was established as a democratic party in the true sense of the word.

Deuba argued that NC had conducted general conventions at all levels and women's participation was ensured from the grassroots level. He argued that the principle of inclusiveness that NC embodied would rarely be manifested by other political parties.

Deuba also urged one and all to pay attention to increasing the number of women voters in the party's next general convention. Deuba also extended gratitude to the Central Election Committee for successfully holding the national convention from ward to the center level despite various odds.

A total of 134 office-bearers and members elected from the 14th general convention were provided with certificates by the NC's Central Election Committee coordinator Gopal Krishna Ghimire. The party's central working committee meeting was held following the distribution of certificates to elected members.